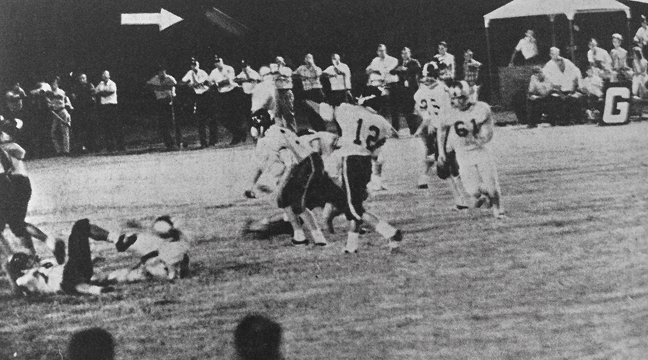 Editor’s Note: Here at the Americus Times-Recorder, we’re very proud of our area’s rich history of sporting excellence. One of the area’s most celebrated historical sporting periods was the Americus High School Panthers’ 1965 season, in which the team went undefeated, rolling over opponent after opponent on their way to a sweep of the state championship series.
While delving through our back issues and expansive archives, we have uncovered a wealth of photographs and articles written by former Times-Recorder sports editor, the late Clarence Graddick, during that era.
In our last installment of the series, we read about yet another AHS shutout win over the Bainbridge Bearcats and saw some blunt remarks that Graddick had for the state’s All-Star team pickers during the team’s week off, as he rightfully felt that the team’s defensive players were being short-changed by the “Roll Call”.
This week, we move on to another sweep by the Panthers in a match against the Worth County Rams.
Leading up to the match, Graddick published one of his trademark, “Sportingly Yours” columns, describing the upcoming test against Worth County. In the column, he wisely advised the team and its fans not to look too far ahead because, “When a team begins to look over a seemingly weak team to a stronger one down the line, that is the time that it is leaving itself open for a big upset.”
Graddick then continued, “We don’t think that the Panthers have overlooked the fact that Worth County can be tough and are always looking for a chance to beat the Americus team. If we look back into the past we will find that the Sylvester boys have always put up a good scrap against Americus in any game in which they met.”
Graddick had no problem looking backward to the Panthers’ progress to that date, however, saying, “The boys have done a mighty fine job to date and every football fan, or for that matter, those who are not fans, should be proud of the ability of the boys but more than that, they should be proud of the way they have conducted themselves on and off the field.
“Football is a game of contact,” he continued. “And often times, boys, in the heat of battle will forget themselves and let the tempers fly. I, honestly, think that less of this is done now than at times in the past (here, we speak in general terms and not just about the Panthers) and a cleaner, faster brand of football is the result and we believe more pleasing to the fans.
“Back to the season,” he concluded. “The Panthers have shown good teamwork and an excellent team spirit in defeating the three opponents played. The offense has run up 80 points while the stalwart defense has held the enemies scoreless. Every boy has done his job or it would not have been so.”
In the Sept. 25, 1965 edition of the Times-Recorder, amid articles about President Johnson’s efforts to give the country of Panama joint ownership of the Panama Canal, an AP article about South Vietnamese forces retaking an outpost previously controlled by the Viet Cong, and the Tonight Show’s upcoming celebration of the third anniversary of Johnny Carson taking over hosting duties, the Times-Recorder published a lengthy article titled, “Panthers take 4th straight in 33-0 win over Rams”, by Graddick.
In the article, Graddick chronicled the Panthers’ most recent battle of the season against the Worth County Rams, which landed them yet another overwhelming victory.
Here, we share a portion of this article:
—————————————–
Panthers take 4th straight in 33-0 win over Rams: Team Effort Marks First AHS Sub-Region Victory

The sub-region wars of the Americus High Panthers in Region 1-A West got off to a muddy but suspicious start here Friday night as the Panthers ran their string of wins for the season to four straight games with a 33-0 win over the visiting Worth County Rams of Sylvester before a capacity crowd of 2,000 fans who turned out despite threatening weather.
The second time the Panthers had the ball a 52-yard march began, to add to the yearly total of points which at the end of the game totaled 113 points for the four games. When the dust had settled down the Panthers goal line also remained uncrossed for the season.
Buck Shiver, fullback, put the first six points on the scoreboard late in the initial quarter as he plunged over the right side for eight yards carrying about four of the defenders across with him. David Reeves’ try for the extra point was blocked.
The next touchdown for the Panthers was a quicky as on the fourth play of the second period Bill Chambliss, left half, crashed over from the three yard-line for the score. Reeves kicked and the score was 13-0. The touchdown was set up on a fourth down punt situation by the Rams and a high snap from the center and the Panthers took over on the three.
HORNE SCORES
Harold Horne, right half but running this time at the left half spot, broke off left tackle and waltzed for the next 34 yards for the next score shortly before the first half ended. Reeves kicked the PAT and it was 20-0 Americus at the half. The drive covered 53 yards in only three plays including a pass interference call against Worth.
The Panthers picked right back up after intermission as Chambliss returned the kickoff 20 yards to the Americus 40. Seven plays later he broke over right tackle for 24 yards and the score. In between he threw his only pass of the game complete to Horne for 10 yards. Reeves booted the extra point.
BOMB HITS
A short kickoff, good return, two plays that broke even and a fumble which was recovered by Reese Summerford for Americus on its own 49-yard line– then the bomb exploded. On the first play from scrimmage, Reeves uncorked a long pass which end Bob McKinnin took to the 20 and moved across for the score and the final try for the extra point was blocked as the first one was but Americus led 33-0 and the youngsters took over from there for the Panthers.
As impressive as the Panther offense was in rolling up 255 yards on the ground and 90 by air, the defensive troops were magnificent as they trotted off the field. Midway through the third quarter, the Rams had minus four yards net rushing and four through the air to balance out at exactly zero.
———————————–
Though Graddick stated that noting a player who could be considered a star of the game would be difficult, as so many of the team’s members had made great contributions, he did highlight one player in a section of the article called “Fierce Fennessy”. In that section, he stated, “Should one be forced to single out an individual he would have to point to Mike Fennessy, who we believed played the best game of his career against the Rams. He was pure dynamite on defense as he repeatedly broke through from his middle guard spot to down a Worth runner. When it wasn’t him it was Ronnie Adkins or if these two were not around, there would be plenty more and all were hitting hard.”
———————————–
Editor’s note: “Hitting hard” was definitely an understatement, as the Panthers’ defense held the Rams to only six first downs through the entire game and allowed only 76 all-purpose yards, each of which were gained with the team’s first-string players on the sidelines. 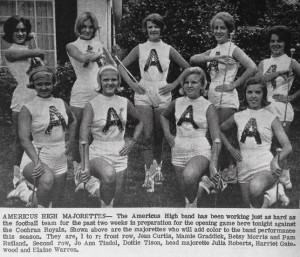 ATR File Photo:
No football game would be complete without talented half-time performers. This photo from August 1975, shows the the Americus High School majorettes, who accompanied the band to the field during half-time to entertain the crowd.

In contrast, the Panthers’ five regular attackers, Gary Reeves, Buck Shiver, Chambliss, Fennessy, and Horne, carried the ball 27 times to grind out 231 yards on the ground. With his spot-on passing, David Reeves tacked on another 90 yards through the air.
Be sure to visit us next week as we continue to explore the Panthers’ epic 1965 season, with the details of the Panthers’ sweeping victory over the Brooks County Tigers and input from members of the 1965 team.
———————————–
The Americus Times-Recorder has recently begun conducting interviews with members of the 1965 Panthers’ team. Unfortunately, however, we have not been able to track down contact information for all of the team’s players. If any of our readers were members of the AHS1965 team or coaching staff, we would like to hear from you. If you would like to participate, please cotact us by email at michael.murray@americustimesrecorder.com or call us during business hours at (229) 924-2751.