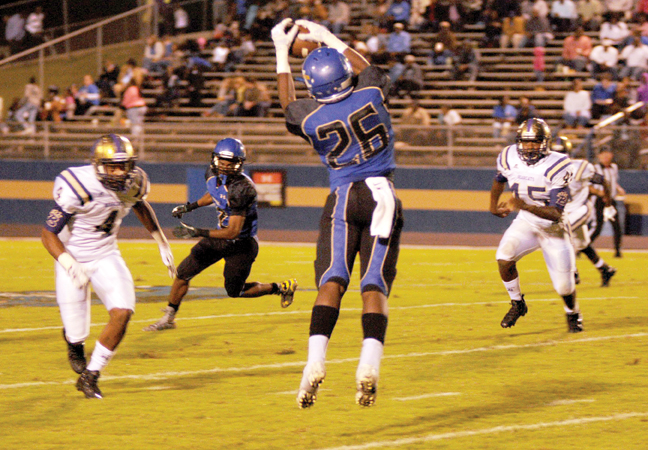 Photo by Jeff Findley: ASHS’ wide receiver, Braylen Williams, brings down a reception in the first half of the Panthers’ Oct. 2 contest against the Bainbridge Bearcats. 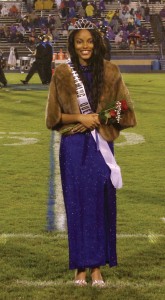 AMERICUS – The Americus-Sumter Panthers celebrated Homecoming on Oct. 2 at Finklea-Robinson Field in Americus, taking on the Bainbridge Bearcats. After a week of rest since their last match against the Albany High, in which the Panthers gained a significant 49-20 win over the Indians, the Americus squad hit the field determined to make their mark against their long-time rivals.
Coming into the match with a 5-0 overall record, the Bearcats quickly demonstrated how they have managed to stay at the top of region 1-AAAA, dealing a 38-0 loss to the Americus squad.
With the defeat, the Panthers drop to 2-3 overall and 1-1 in the region.
The Bearcats received the first kickoff and began a steady drive down the field that spanned 13 plays and 53 yards. A hard Panther defense, led by jarring tackles from Kobe Lewis and Jamorrian Johnson, coupled with an expertly broken-up pass attempt by Darion Tyson halted the team’s progress at the ASHS 17 near the 8:00 mark. Bainbridge opened the scoring for the game on fourth down with a successful field goal from the 17 yard-line to put them up 3-0 early in the game.
After holding the Panthers to three and out, Bainbridge struck again on their next drive, plowing 61 yards through Panther territory to cap off the action with an 18-yard completion into the end zone. Another successful PAT left the visiting team ahead 10-0.
The Panthers prepared to answer, with a long reception by wide receiver, Braylen Williams and another exciting run by Lewis, but the Bearcats forced a fumble on their own 20 that led gave Bainbridge running back Dameon Pierce the opportunity to take off on an 80-yard touchdown run before the first quarter ended.
The Panthers responded with a hard run by Eric Brown up the gut and a pair of receptions by Michael Terry and Jacquez Bartley that pushed the ball into Bearcat territory, but the drive was cut off by a determined Bainbridge squad.
The Bearcats scored again soon after, aided by a personal foul flag on the home team that netted the them 20 yards. Despite hard runs by quarterback, Mekall Yancey, Brown, and AJ Payne, the Bearcats’ defense held the Panthers to six downs. The Americus defense responded in kind, holding the Bearcats to one set of downs and forcing a punt, but a pair of injuries to Yancey and senior offensive lineman, Benjamin Walters on the return drive put two of the team’s more experienced players on the sidelines for the remainder of the game. Payne stepped in to handle quarterback duties in the second half, but the Panthers never managed to recover, taking a 38-0 loss at the final buzzer.
A Homecoming ceremony was held during half time in which the members of the homecoming court were recognized. At the conclusion of the ceremony, Grace Cato and Adam King were crowned the Homecoming King and Queen.
The Panthers return to action on Oct. 8, traveling to Albany to battle the Westover Patriots. The Panthers are 2-3 against the Patriots in the teams’ last five gridiron clashes.
The Americus squad will take a break the next week before returning to their home field to take on the Worth county Rams on Oct. 23. The Panthers have won four of the team’s last five games against Worth.