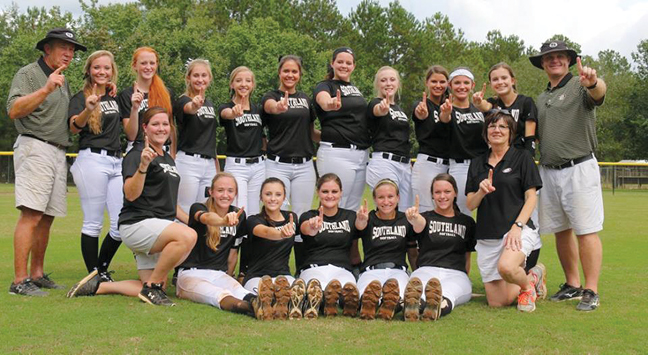 Photo by Sheri Bass: The Lady Raiders and members of the team’s coaching staff each hold up one finger to signify “number one” after the Sept. 29 victory over Valwood that ended regular season region play with Southland firmly in first place. 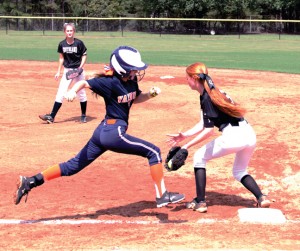 The Southland Academy Lady Raiders capped of their region 3-IAAA schedule this week with a pair of blowout wins over the Deerfield-Windsor Lady Knights and the Valwood Lady Valiants to solidify the team’s first-place finish in the region with a record of 13-1, falling only to the Tiftarea Lady Panthers on Sept. 22. Both of this week’s games were originally scheduled to be played earlier this season, but had been postponed due to poor weather conditions.
With their impressive region record, the Lady Raiders have the advantage of hosting the first round of the GISA playoffs, facing Griffin Christian on Oct. 6 in Americus. The winner of that match will go on to face the winner of a test between Trinity Christian Dublin and Westfield on Oct. 10.
The Lady Raiders shone in their final two region games of the regular season, shutting out Deerfield 15-0 on their home field before returning to Americus to deal a similar 12-0 defeat to Valwood.
The Southland girls pulled ahead early in the first match of the week, as the team’s fans have come to expect. The match was highlighted by a strong performance from Olivia Perry, who played what was arguably her best game of the season.
The Lady Raiders grabbed a quick four runs in the first inning. The second inning saw the Lady Raiders expand their lead 200 percent, as Perry continued her hitting streak accompanied by Christina Davis, Brittney Tyler, and Abby Dent to tack on eight more points. Another three runs in the third put the game out of reach for the Lady Knights and the game was called.
Megan Burke showcased her throwing skills in the contest, gaining nine strikeouts. In her three innings working from the mound, Burke gave up only two hits.
Perry’s bat was seemingly on fire during the contest, as she took advantage of three hits to bring in six RBIs, pacing the Lady Raiders’ offense. Davis and Tyler each contributed two hits to the win, with Davis pushing two runners across the plate. Dent brought in one RBI.
Upon returning to their home field on Sept. 30, the Lady Raiders continued their domination of the region diamond with another strong showing against Valwood, resulting in a 12-0 win.
The Southland squad got a slower start in this match, scoring only two runs in the first inning and being held to only three at-bats in the second.
The Lady Raiders built up steam in the third frame, with Savanna Swann, Davis, and Tyler each batting in runners to put Southland up 5-0 before heading into the fourth inning.
Early in the fourth, with two runners on base, Brandi Sellars nailed the first pitch tossed her way deep into left field, allowing Perry to come home. Sellars then proceeded to steal second before Swann reached first on an error, giving her the chance to cross the plate. With Dent up to bat, Swann stole second before the slugger blasted a grounder past second base, allowing Swann to come in. Tyler then stepped up for a first-pitch bash into centerfield and Burke followed with a hard drive down the first base line that brought in Mary Martin Sheely (pinch-running for Dent) and pushed Tyler to third.
Olivia Payne (pinch-running for Burke) then stole second before Kaitlyn Smith continued the hitting streak with a hard shot deep into centerfield that brought in Tyler and Payne, putting Southland up by 11. Perry capped off the game with another shot to centerfield, doubling on a missed catch. Running in place of the pitcher, Cassi Bass reached home on this play, cinching the region title for the Lady Raiders.
After the series of wins, Lady Raider head coach, John Brady spoke with the Times-Recorder, saying. “I am really excited for our team. We have a lot of new faces on the team this year and everyone has really worked hard for this. Coming into this season, We thought that we would be able to [win the region] again and we’ve been working on getting the pieces of this puzzle put together to make that happen.”
Brady went on to sing the praises of the team’s seniors, saying, “I would like to thank all of our seniors on the team, Megan Burke, Christina Davis, Brandi Sellars, Olivia Payne, and Farrah Sechrist for their efforts this season and for the leadership that they have shown our team. They are all great kids. We appreciate them and wish them all the best.”