Submitted by South Georgia Technical College: Shown above are all the individuals who participated in the SGTC Jets Booster Club Sparky Reeves Golf Classic.

AMERICUS – The first annual South Georgia Technical College (SGTC) Jets Booster Club Sparky Reeves Golf Tournament held at the Griffin Bell Golf and Conference Center in Americus, Georgia was a huge success, said South Georgia Technical College Athletic Director and Lady Jets head coach James Frey.
“We were extremely pleased with the turnout for the first Sparky Reeves Golf Tournament,” said Coach Frey. “This is the first time that the Jets Booster Club has hosted a golf tournament and it was very fitting that it be named in honor of retiring SGTC President Sparky Reeves, who has done so much for our athletic program.”
Reeves, who played in the tournament with his son and grandson, Kevin and Will Reeves, was humbled by the turnout and the well wishes offered to him by the individuals who participated in the three person scramble which featured a shotgun start, a putting contest, a free throw contest, longest drive, and closest to the pin contest in addition to prizes for the top three teams.
“I would like to thank everyone who participated today and I would also like to encourage each of you to come out and watch the Jets and the Lady Jets this season if you have not done so before. I think you will be tremendously impressed at the level of play by our athletes at SGTC and in the National Junior College Athletic Association,” said Reeves.
Prior to the Shotgun start, the Caterpillar team headed by Ring Power’s Chip Handley presented President Sparky Reeves with a red and black CAT golf bag with his name embroidered on the bag in Jets red. Handley thanked Reeves on behalf of all six CAT dealers from the Southeastern United States who participate in the Think Big Heavy Equipment Diesel Program at South Georgia Technical College. “We appreciate you and we wish you the best of luck in the future,” said Handley as he presented Reeves with the gift.
The Hooks Agency team of Rhett Simmons, Brian Simmons, and William Rambo took first place in the tournament with a score of 51. Second place was awarded to the Golf South Arborist Consultants which included: Karl Booker, Brey Bishop, and Jamie Ward. Both the second and third place teams tied with a score of 52, but the Golf South Arborist team edged out the Sumter Broadcasting Company for second place based on regression.
The Sumter Broadcasting Company team consisted of Steve Lashley, Emory Parker, and Greg Barfield. Emory Parker and Richard Wicker also took prizes for the Closet to the Hole and Chaz Fairbrother was awarded a prize for the longest drive on Hole 11. Rob Avery won the putting contest.
A total of 27 teams participated in the event and all the proceeds will be used to support the SGTC Jets and Lady Jets basketball programs. 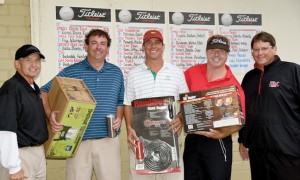