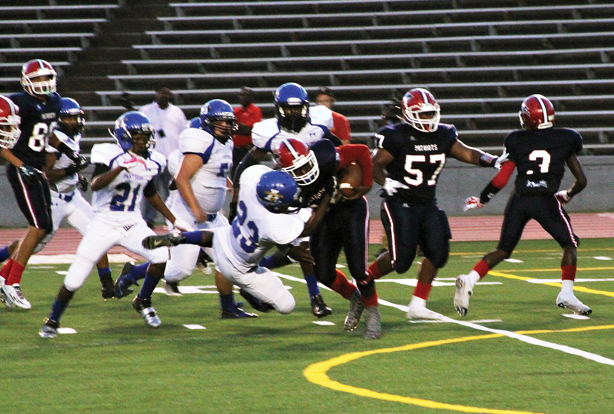 ALBANY – The Americus-Sumter Panthers hit the road on Oct. 8, traveling to Hugh Mills Stadium in Albany to take on the Westover Patriots.  It was a rough evening on the gridiron for the Panthers, though. Despite a spirited performance from the visiting team, the Panthers were dealt a 26-7 loss in the match.
Murphy’s law famously states that “If something can go wrong, it will.” It certainly seemed to work that way for the Panthers that evening as a series of unfortunate penalties  and luckless turnovers worked in tandem to contribute to the region 4-AAAA loss.
The first of this series of unfortunate events occurred before the Panthers even stepped onto the field, with veteran Panther quarterback, Mekall Yancie, sustaining an injury in the team’s Oct. 2 match against Bainbridge that kept him off the gridiron in Thursday’s game. With Yancie sidelined, passing and hand-off duties were left to sophomore, AJ Payne, who stepped up to the task with vigor. Payne connected on seven passes in the match, gaining around 40 yards through the air.
After receiving the opening kickoff, the Patriots capped off a seven-play drive with a 12-yard run by Emory McKenzie into the end zone. A successful PAT kick put the Patriots up three minutes into the contest.
The Panthers responded in kind, taking possession and plowing down the field on a 10-yard drive that stalled at Westover’s 18 yard-line. From there, Panther running back, Eric Brown made a pair of hard runs, one of which resulted in an apparent touchdown. Unfortunately for the visitors, however, both plays were called back due to penalties. The misfortune continued on the next play when an errant snap set the Panthers back 20-yards, leading to a turnover on downs.
Westover took over on the Americus 42 and steadily pushed down the field, making their way deep into the Americus red zone. The Panthers made a hard goal line stand, the team’s tough defensive line keeping the Patriots from breaking the plane for three downs. An illegal formation penalty set Westover back to the six, forcing them to kick a field goal on fourth down. The kick sailed true and the Patriots expanded their lead to ten points.
Westover struck again in the second quarter, after forcing a Panther fumble. A 31-yard drive spanning five plays gave Westover’s Quentez Carter a chance to score on a six-yard run. Another good PAT left the Panthers trailing by 17 at the half.
Americus opened the second half with a 13-play drive spanning 65 yards that was highlighted by pass completions to Kobe Lewis, Daveon Johnson, and Braylen Williams, as well as a series of keepers by Payne that left the Panthers within inches of the goal line. The visitors’ section of the stands erupted into applause as Eric Brown dodged tackles down the right side and dove into the end zone, putting the Panthers’ first touchdown on the board. Place kicker, Carlos Hernandez, then deftly split the uprights, narrowing the gap to 17-7.
The Panthers’ bad luck soon resumed, however, with 2:30 left in the third quarter as a snap got away from the quarterback, landing in the end zone. Payne and a Patriot defender scrambled for the ball, and the referee called a safety after it shot out of bounds, putting Westover up 19-7.
Opening the third quarter, Panther defender, Adam King, made a fantastic diving catch to pick off a Westover pass, but a hard defensive push by Westover forced the Panthers to return the ball at their opponents’ 23.
Westover then made a long run upon returning a punt halfway through the third before the runner was pushed out near the Panthers’ 16. McKenzie ran it in on the next play and the PAT was good, bringing the game’s final score to 26-9.
The Panthers will take a well-earned break next week, but will return to action in Americus on Oct. 23, facing Worth County and celebrating senior night. The festivities will also include a ceremony, honoring the fortieth and fiftieth anniversaries of the Panthers’ epic 1965, 1974, and 1975 teams. All Ppayers and coaches from these teams are invited to participate and are encouraged to contact the Times-Recorder for more information at michael.murray@americustimesrecorder.com or by phone at (229)924-2751 during business hours. 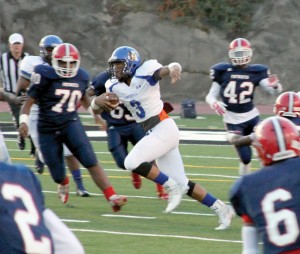 Michael Murray/Americus Times-Recorder:
ASHS quarterback, AJ Payne, plows his way through a sea of red helmets during the Panthers’ Oct. 8 contest against Westover.