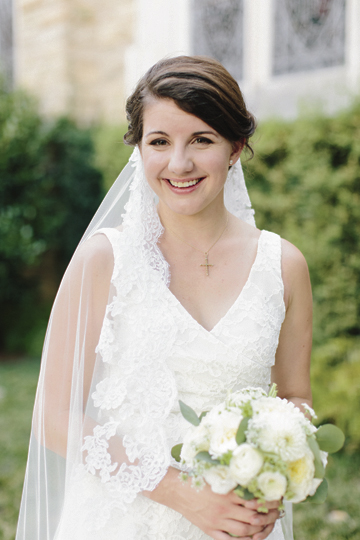 Hayden Blake Headley of Birmingham and George Bardin Hooks Jr. of Americus were united in marriage at 6 p.m. Sept. 12, 2015, at The Cathedral of St. Philip in Atlanta. The double-ring ceremony was officiated by the Rev. Canon Wallace Marsh of Atlanta.
The bride’s parents are Sally Blake Headley and Richard Lewis Headley, both of Birmingham. The groom’s parents are George Bardin Hooks and the late Gail Ann Goen Hooks of Americus.
The bride  wore an ivory lace ball gown and her mother’s veil of illusion with alencon lace trim and a pearl and diamond cross pendant necklace worn by brides in the Hooks family since 1885. She carried a hand-tied bouquet of white ranunculus, freesia and ivory garden roses accented by silver dollar eucalyptus.
Maids of honor were Sara Twardy of Birmingham and Katherine Traylo of St. Louis, Missouri. Bridesmaids were Mary Ann Hooks Hammack, sister of the groom, of Americus; Kendall Brooks of Austin, Texas; Patricia Arendall Daniel of Nashville, Tennessee; Susan Wells Parks of Nashville, Tennessee, and Alice Henderson Strachan of Atlanta.
Flower girls were Anna Gail Hammack, niece of the groom, of Americus; Sloan Arnold of Americus; Hallie Daniel of Nashville and Lucy Kinsinger of Atlanta.
George Bardin Hooks, father of the groom, served as best man.
Groomsmen were Cove Headley, brother of bride, Austin, Texas; Justin Arnold of Americus; Nathan Hammack of Americus, brother-in-law of the groom; Barton Black of Atlanta; William Buchanan of Columbus; Walker Entwistle of Atlanta, and William Reider of Chattanooga, Tennessee.
Program attendants were Cole Forbes, Eleanor Forbes, Samuel Trulove and Benjamin Trulove, all of Birmingham.
Scripture reader was Greer Horne of Atlanta.
The bridal party entered to the hymn “All People Who on Earth Do Dwell” and the organ was played by Dr. Patrick Scott.
A reception was held at Wimbish House.
The rehearsal dinner was held Sept. 11 at Cherokee Town Club, hosted by George and Kay Hooks.
The bridesmaids’ luncheon was held Sept. 12 at Swan Coach House, given by the bride’s cousins and friends of the mother of the bride.
Following a wedding trip to Europe, the couple is at home at 124 W.  Glessner St., Americus. She is an attorney with Perry & Walters in Albany and he is a partner at the Americus law firm of Arnold & Hooks.