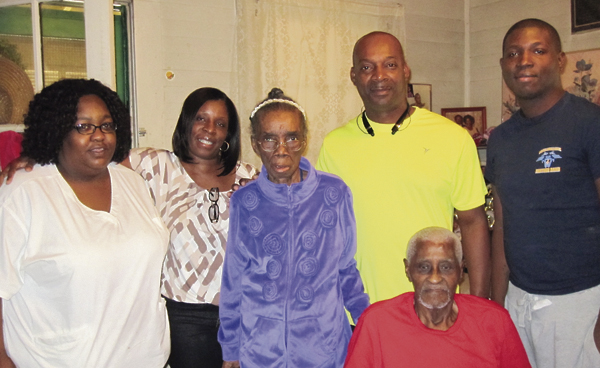 AMERICUS — Surviving breast cancer is no easy task. It takes an immeasurable toll on even the strongest individuals and families. Breast cancer is not picky when it comes to choosing its victims, and it certainly did not care that T. Liller Pless was 90 years old when she was first diagnosed.
Healthy most of her life, she had already raised eight children, more than 30 grandchildren, and an untold number of great- and great-great-grandchildren, “at least 100,” she said with a twinkle in her eye.
Pless describes her experience on that day in November 2010.
“I was sitting here one day, and felt this little bump, right here under my arm,” she said motioning to her right underarm. “It was itching like crazy and I just didn’t know what it was, and it wouldn’t go away,” she said. Pless said it was her daughter who passed the news along to other family members, and the next thing they all knew, the doctor was saying breast cancer.
“She was really strong,” her granddaughter Demetria Bridges said. “She never complained about anything.”
Pless’ youngest son, Kelvin Pless, agreed.
“Even when the doctor suggested the entire breast be removed, she still didn’t complain,” he said.
A mastectomy was ordered for the sprightly grandmother and she didn’t even bat an eye.
“That was the best option for her at her age. Treatment, chemo, that wouldn’t have been good for her,” Kelvin said.
Looking on her with fondness, Bridges and grandson Shernone Butts described the news as being harder for the family than it was for her.
“She was just amazing through the whole process,” Butts said.
Now 95, Liller Pless chuckles to herself. “It don’t bother me and I don’t bother it,” she said of her missing breast. “I guess it was just my time to have it (breast cancer),” she said.
Born in 1920, Pless shares a birth year with notable inventions such as the automobile, hair dryer and Q-Tips. Her age certainly has no bearing on her attitude or zest for life. Her family says she is up by 7 a.m. every day, getting around with only the aid of a walker. She enjoys spending each day with her husband Andrew Pless Sr., sitting in the cool autumn air on the front porch they have shared together in Americus since 1966. Remarkably, they have been married for 76 years. They still enjoy traveling together, and recently took a field trip to a place where they both grew up, the Old John Colbert Farm in Preston.
A member of Allen Chapel A.M.E. Church and having been ordained as a deaconess, Pless served as a missionary well into her 80s, out running even the youngest ministers and volunteers. When she isn’t serving in her church, she enjoys being a motherly patron to everyone in the community. Affectionately referred to as simply “grandma,” she is passionate when she says, “The Lord takes care of you as long as you treat people right.”
Being a cancer survivor, she says she cherishes every day. The secret to surviving, she said, is to take care of you, and take care of others. 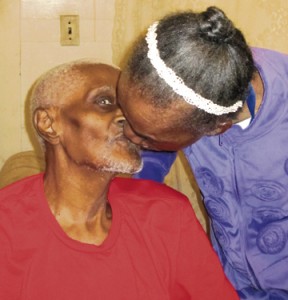 T. Liller Pless plants an affectionate kiss on her husband of 76 years.