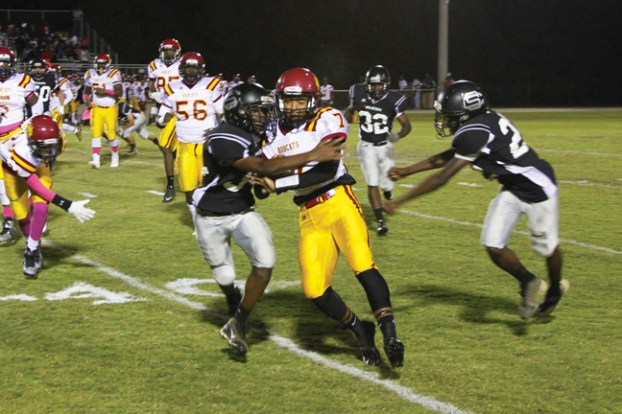 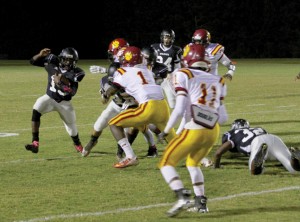 Michael Murray/Americus Times-Recorder:
Schley’s Calvin Sims dashes around the right side of Dooly’s defensive line in the Wildcats’ Oct.16 contest against the Bobcats.

By MICHAEL MURRAY and RONALD FORDHAM

ELLAVILLE – AS the 2015 football season draws ever closer to a conclusion there is no doubt that the competition is steadily becoming increasingly more intense. This certainly rang true as the Schley County Wildcats took the field once more on the evening of Oct. 16 to battle the Dooly County Bobcats in a heated Ellaville contest.
With the Wildcats having fallen in three out of four of the teams’ meetings since the two rivals began playing four years ago, Schley’s boys hit the gridiron with a vengeance, eager to tip the scales in their favor this time around. The Bobcats hit the field full of determination as well, with the sting of last season’s 26-21 loss to the Wildcats still gnawing at their memories. Only one team would come out on top, however, and Dooly took the night’s honors, dealing a 42-14 defeat to the Wildcats.
Soon after the action began, Dooly struck after stalling the Wildcats’ drive opening drive. Schley’s opener was highlighted by a play in which Glenn Pilcher pulled down a pass that was nearly intercepted  by a Bobcat defender to gain 30 yards. A hard defensive push by the visiting team held the team to four downs after that, and the ball was turned over to Dooly at their own 40.
Dooly put the first points on the board after a 70-yard drive was capped off by a two-yard run by Stevie Rhodes that landed in the end zone. Bo Lawson followed with a successful two-point conversion run to put the Bobcats up 8-0 with four minutes left in the first quarter.
Schley answered after picking up a muffed Dooly punt and commencing a drive that was propelled forward by a 32-yard run by Derric Tatum. Calvin Sims contributed a few short rushes before quarterback, Daniel Reese snuck in a one-yard TD run. Corey Tanner’s PAT attempt sailed true, narrowing the Bobcats’ lead to 8-7 early in the second frame.
Dooly responded five minutes later, with a drive marred by a pair of fumbles that the Bobcats managed to recover. John Clayton put the Bobcats within striking distance with a 10-yard run that Rhodes followed with another ten-yarder into the end zone. A two-point conversion pass was deflected by Schley’s Dartavious Napper to hold the team’s lead to seven points at 14-7.
After holding the Wildcats to three and out around midfield, Dooly widened the gap with a nearly 60-yard run by Bo Lawson on the drive’s opening play. The Bobcats scored on the play with 3:30 left before the break before adding two more on a conversion run in by Rhodes.
The Wildcats pressed forward on the return drive, fueled by hard runs by Alec Harrris, Sims, and Tatum before a flag-riddled 45-yard fumble recovery was picked up by the Bobcats’ Rotavious Billings, who ran it back to the end zone.
The play was called back on an illegal block penalty, but the Bobcats remained in possession at the Wildcats’ 33. A trio of penalties pushed the Bobcats back nearly 35 yards before Rhodes broke away for another touchdown run, spanning 65 yards with 45 seconds left in the half. Another two-pointer was stalled by the Wildcats’ defense, stalling the score at 28-7, where it would stay until the buzzer.
The Wildcats recovered a Dooly fumble early in the second half to take possession on their own 19, beginning a drive that runs by Tatum and Harris would push forward before Tanner was forced to punt to Dooly’s 37. Bo Lawson took off on the first play of Dooly’s possession for a 63-yarder that ended in the end zone. Antonio Laidler kicked a successful PAT to expand their lead to 35-7 five minutes into the half.
The Bobcats continued the scoring spree soon after with a touchdown run by John Clayton and another successful kick by Laidler, adding another seven to Dooly’s significant lead.
Schley recovered a fumble early in the final quarter on Dooly’s 20. The Wildcats pushed ahead on a pair of runs by Tra Sampson and a keeper by Reese to land them at the ten. Tatum then went off right tackle, pressing to the five before Sampson added another four yards on a hard run, dragging defenders every inch of the way. From the one, Sampson barreled through once more for the Wildcats’ second touchdown of the game, bringing the game’s final score to 42-14.
The Wildcats return to action on Oct. 23, facing the Hawkinsville Red Devils in Ellaville. The Bobcats host the Taylor County Vikings on Oct. 23 in Vienna.

By MICHAEL MURRAY CAMILLA – The Southland Academy Raiders traveled to Camila on Oct. 23 to face off against the Westwood... read more