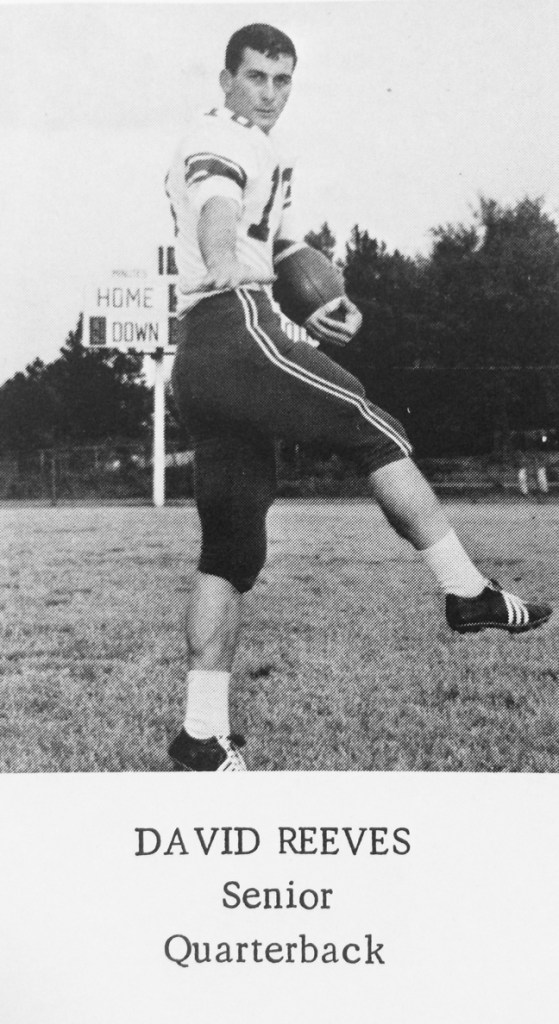 Submitted by Kellette Wade: This photo from the Americus High School Class of 1966 yearbook depicts David Reeves showing off his stiff-arm rushing stance.

Editor’s Note: Here at the Americus Times-Recorder, we’re very proud of our area’s rich history of sporting excellence. One of the area’s most celebrated historical periods of athletic prowess was the Americus High School Panthers’ 1965 season, in which the team went undefeated, rolling over opponent after opponent on their way to a sweep of the state championship series.
While delving through our back issues and expansive archives, we have uncovered a wealth of photographs and articles written by former Times-Recorder sports editor, the late Clarence Graddick, during that era.
In last week’s installment of the series, we read about the Panthers’ sixth shutout of the season, in which David Reeves landed three touchdown passes to lead the team to a 42-0 win.
Following this match, the Panthers immediately began their preparations to face a much tougher foe, the Cook County Hornets.
In anticipation of the upcoming match, Graddick penned one of his signature “Sportingly Yours” columns in the Oct. 15, 1965 edition of the Times-Recorder titled, “Cook Can Be Real Tough.”
“The Americus High Panthers may have a hard time tonight keeping their scoreless record intact when they meet the big and always tough Cook County Hornets on their home field in Adel…” wrote Graddick.
“This is one year the Panthers should have a bone to pick with the boys from Adel,” he continued, “After the way they beat them in Americus last year. Americus is a much stronger team this year and will certainly be shooting for a convincing win.”
Graddick went on to say that it was very likely that the teams might see other once again in the post-season, as the Hornets were on track to win region 1-A east and the Panthers were certainly barreling their way through the western half of the region.
Graddick concluded his analysis of the scenario that would lead the teams to meet again in the region championship by saying, “There are a lot of ‘ifs’ in that and so the fans and players alike had better concentrate on the game tonight and take the others as they come up.”
Of course, we all know how the season ended for the Panthers, but Graddick, at that time, would have had no idea just how right he was, as the remainder of the season played 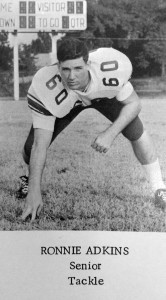 Submitted by Kellette Wade:
This photo from the Americus High School Class of 1966 yearbook shows Ronnie Adkins taking his three-point stance as a defensive tackle for the Panthers.

out exactly as he had speculated.
On the morning after the game, the Times-Recorder featured an article detailing how Sandy Koufax had been named MVP in the 1965 World Series despite refusing the pitch the series opener because it fell on Yom Kippur, an article about the ongoing confrontations between the California police and war protesters in Berkley, and an article about a four-game winning streak by the Sumter High School Tigers. The sports page was dominated, however, by a Graddick-penned article titled, “Panthers Prove Tougher Than Hornets by 13-0 Score”.
A portion of this article is shared below:
——————————————
Panthers Prove Tougher Than Hornets by 13-0 Score: Rock-Ribbed Defense Holds as Reeves & Reeves Tally

ADEL, Ga. – It was an affair of the survival of the fittest and the Americus High Panthers, despite giving up size to the larger Cook County Hornets, came out on the big end of a 13-0 score here on Friday night to keep its unbeaten and unscored on record in seven games.
At least four time-outs were called during the game as Cook County players remained down after a play and a total of at least seven were shaken up enough to leave the game at least temporarily. Only once was an Americus player favored with a time-out from the hard knocking and since it was David Reeves, the quarterback, a time-out was called for him to regain his composure before the next play was run.
ADKINS RETURNS
Ronnie Adkins was also hurt with a bruised shoulder, early in the second period, but he came out under his own power and later returned to the game to catch a tackle-eligible pass as the time was running out in the half. He… sat out about half of the third period, until the Hornets began moving the ball. After a third first-down in a row, Adkins returned to the game to bolster the middle defense. Three plays later, Cook was forced to punt on fourth down.
Grover Rogers gave the Panthers their chance about the end of the first-third of the second quarter as he intercepted the only first-half pass thrown by the Cook County quarterback, Abbey Bennett. He pulled the ball down… on the Americus 41-yard line and was dropped in his tracks.
TOUCHDOWN HEAVE
David Reeves, who had completed one pass in the first quarter, dropped back on first down and cut loose with the ball to cousin, Gary Reeves.
Gary had slipped behind the Cook defenders and took it over his shoulder on about the Hornet 30-yard line and simply outran the pair of pursuers the rest of the way for a score. David kicked the extra point with 8:53 left in the half…
——————————————
The article goes on to say that the Panthers continued to stand their ground, despite a fumbled punt later in the first half that the Hornets managed to push into the AHS red zone. Americus’ strong defense beat back the assault, retaking the ball on their own 20 before the break.
Throughout the first half, the Panthers had allowed the Hornets only two first downs, 36-yards net rushing, and no completed passes. In stark contrast to these figures, the Panthers had amassed 83 yards on the ground and 116 through the air for a total of 199 yards and eight first downs.
The Americus squad struck one more time late in the second half.
From Graddick’s article: “The fourth quarter marked the beginning of another touchdown drive for Americus and it was more or less like cutting through a stone wall. The drive consumed 74 yards in 18 plays not including an exchange of fumbles on successive plays before David rolled to his left and refused to let about four of the defenders stop him from crossing the goal line.”
A pair of interceptions by Bill Chambliss and David Reeves in the remaining minutes of the game dashed any hope that the Hornets might have had of making a comeback and the Panthers rolled on to take their seventh win of the season.
At the final buzzer, the Panthers had amassed 310 total yards, with 156 gained through the air and 154 on the ground. The Panthers’ powerful defense held the Hornets to only 107 total yards in the match. Americus pushed ahead for 16 first downs in the match, all the while giving up only eight to their Cook County opponents. David Reeves connected on nine passes in the match, while the Panthers’ defense pulled in three interceptions. Cook’s quarterback, Abbey Bennett, found only one receiver that wasn’t wearing blue and white through the duration of the game.
With one more shutout on the record books, the Panthers began their preparations for the team’s next contest against the Thomas County Central Yellowjackets, completely unaware that they had not seen the last of the Cook County Hornets. The Panthers would battle the Hornets once more three weeks later in a bid to claim the region title.
Gary and David Reeves recently spoke with the Times-Recorder. When the subject of the five state championship teams that the two had played on together (Both were on two state championship football teams in 1962 and 1965, as well as three state championship baseball teams), David said, “I always bragged about this when I go to another town like Adel. Adel didn’t like Americus because we’d beat them nearly every time we’d play.”
That was certainly true for the 1965 football season, when the Panthers would double down on Cook’s Hornets, defeating them on two separate occasions.
——————————————
Be sure to visit us next week as we continue to explore the Panthers’ epic 1965 season, with the details of yet another impressive victory over the Thomas County Central Yellowjackets and more excerpts from our interviews with members of the Panthers’ incredible 1965 team.