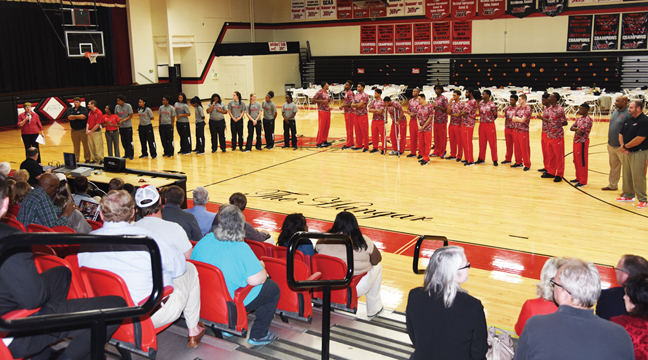 Submitted by South Georgia Technical College: South Georgia Technical College Acting President Janice Davis (far left) is shown above thanking everyone for coming out to support the 2015-16 Jets and Lady Jets basketball teams at the Jets Booster Club Tip-Off event held in conjunction with the Americus-Sumter County Chamber of Commerce. Also in the picture are the Jets’ and Lady Jets’ players and coaches, who were introduced to the crowd.

AMERICUS – Over 150 individuals attended the South Georgia Technical College (SGTC) Jets Booster Club 2015 Tip-Off banquet which was held in conjunction with the Americus and Sumter County Chamber of Commerce as a “Business After Hours” event in the James S. Peters Gymnasium (The Hangar) at SGTC in Americus.
All Jets Booster Club members, prospective members, guests and interested persons were invited to attend the “Tip-Off After Hours Event” which featured a low country boil dinner and door prizes.
Individuals had the opportunity to meet and greet with the Jets’ and Lady Jets’ coaches and basketball players, as well as watch a three point shooting exhibition.
SGTC acting president, Janice Davis, welcomed everyone to the college and challenged the members of the 2015-16 Jets and Lady Jets to exceed the accomplishments of the 2014-15 season. Both squads had over 20 wins last season and the Lady Jets captured the NJCAA Region XVII title, the NJCAA District J championship, and advanced to the National Junior College Athletic Association (NJCAA) National Tournament in Salina, Kansas.
The Lady Jets lost to Hutchinson, Kansas in the sweet sixteen round, but Hutchinson was later disqualified, which moved the Lady Jets into the Elite Eight in the nation.
SGTC Athletic Director and Lady Jets head coach, James Frey, thanked everyone for coming out to support the Jets and Lady Jets. He also introduced the members of the Lady Jets and then asked new Jets head coach, Travis Garrett, to introduce the Jets.
Lady Jets sophomore shooting guard, Cierra Bond, of Inkster, Michigan, was the overall three point shooting champion between the Jets and the Lady Jets.
Both teams are currently participating in exhibition scrimmages. The Lady Jets hosted Albany State in a scrimmage on Oct. 18 in the Hangar and the Jets traveled to Suwannee for a Junior College (JUCO) Jamboree.
The season officially opens on Oct. 30, when the Jets travel to Pensacola, FL, for the JPC Classic. They will play Pensacola and Gulf Coast.
The Lady Jets open up on Oct. 31 at the Darton State Classic in Albany with games against Southern Crescent and Summer Hill Prep.
The first home game for the Lady Jets will be held on Nov. 25, when they host Shelton State College at 2:00 p.m.
The Jets’ first home game is not until Dec. 5, when they compete in a double-header with the Lady Jets playing East Georgia State College at 1:00 p.m., followed by the Jets, who face East Georgia at 4:00 p.m.
For more information on joining the Jets Booster Club contact SGTC Athletic Director, James Frey, at 229-931-2039 or mail your membership fee to South Georgia Technical College, Attn: Jets Booster Club, 900 South Georgia Tech Parkway, Americus, GA 31709.