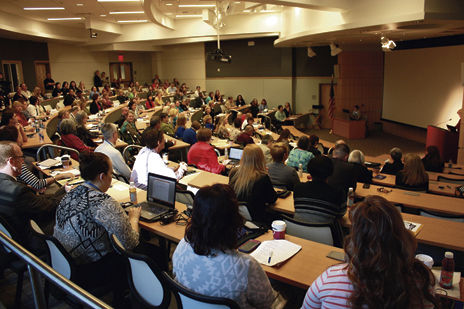 A shot of the crowd during the annual Rosalynn Carter Institute for Caregiving National Summit, 2015.

AMERICUS — At this time each year, the Rosalynn Carter Institute (RCI) for Caregiving at Georgia Southwestern State University (GSW) hosts its annual national summit. Nearly 150 caregivers, representatives from caregiving support agencies and speakers from around the country and the globe make their way to Americus. The theme this year was “Supporting Those Who Support Others.”
Following a day full of pre-conference workshops on Thursday, RCI Executive Director Leisa Easom, Ph.D., kicked off the program Friday welcoming the attendees followed by RCI namesake and former first lady Rosalynn Carter and Kandy Ferree, from the Johnson & Johnson Corporate Contributions Team.
In her introductory remarks, Carter touched on why she decided to establish the RCI in her home county (Sumter) on the campus of her alma mater (Georgia Southwestern) in 1987.
She said the Carter Center in Atlanta already had a strong program in place advocating for mental health. Having served as a caregiver in her immediate family in her early years, Carter had a desire to help serve the needs of all caregivers.
“When we saw that other people in the community were having problems caring for feeble, aging family members with physical problems, I became interested,” Carter said.
Now, more than 25 years later, the RCI is helping communities across the country provide programs proven effective to support caregivers of those with physical disability, traumatic brain injury, Alzheimer’s and other injuries. One of those programs, Operation Family Caregiver (OFC), has taken off after its pilot launch in 2012. Today, OFC serves military families at 12 sites across the U.S. and has partnerships with organizations like the Wounded Warrior Project, the Dole Foundation, Blue Star Families and the Bristol Myer Squibb Foundation.
Operation Family Caregiver is a major component of the National Summit each year, as well. Maj. Gen. Margaret Wilmoth, Ph.D., Deputy Surgeon General of the U.S. Army Reserve, was one of the featured speakers.
“It is not something you do for just eight hours, then go home,” Wilmoth said speaking on the critical role of caregivers in helping soldiers and veterans. “It really does transform the lives around them as well.” Also a military parent, Wilmoth said she knew what it was like to send a loved one off to war.
Col. David W. Sutherland (ret.), co-founder and chairman of Easter Seals Dixon Center, also served as a keynote during the summit. His remarks focused on “Mobilizing Communities for Caregiver Support.” Following his retirement from the military, Sutherland joined with Easter Seals to create Easter Seals Dixon Center.
“Easter Seals provides direct services to nearly 200,000 veterans or military families annually,” he said, “Through medical rehabilitation, workforce development, innovative technology solutions and caregiver support. The last few years, we have trained and supported nearly 35,000 military veteran caregivers.”
The Easter Seals Dixon Center works nationally and locally to break down barriers and connect individuals and organizations with easily accessible solutions veterans and military families need to access meaningful employment, education, and healthcare (www.dixon.easterseals.com).
The dummit agenda also included real-life testimonials from OFC participants and strategies for marketing and recruitment, caregiver resilience, leveraging resources for sustainability and compassion fatigue.
Johnson & Johnson is the primary sponsor for the summit. They are dedicated to supporting family caregivers across the nation, particularly through their partnership with RCI which was established in 2001. This valued partnership builds on the work accomplished by RCI as well as on the social responsibility credo of Johnson & Johnson to be “responsible to the communities in which we live and work,” and to “encourage … better health and education.”
The Rosalynn Carter Institute for Caregiving Awards Gala was scheduled for Friday evening.
For more details, visit www.RosalynnCarter.org