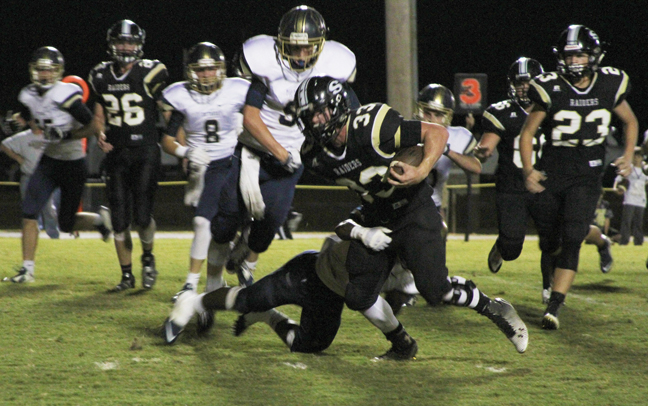 AMERICUS – After an exciting road victory against the Westwood Wildcats last weekend, the Southland Raiders returned home for an Oct. 23 night match-up against the Tiftarea Panthers. While the game was sloppy at times (both the Raiders and Wildcats combined for over ten turnovers), the Raiders showed exceptional strength and resiliency by pulling through for a hard-earned 26-14 win.
The game got off to a rough start as the Raiders attempted a trick passing play that wound up being intercepted by Tiftarea. The Raiders prevailed, though, with a strong defensive effort that was capped off by a forced fumble from Kurtis Andrews. The tough defense continued through the first quarter as Southland’s Townsend Ray hauled down an interception to end the first period at 0-0.
At the start of the second quarter, sophomore Jamal Rice broke loose for a sensational 40-yard dash into the Panthers’ end zone, giving the Raiders a 6-0 lead. On Tiftarea’s ensuing possession, Southland’s stout defense stepped up big and forced another fumble, this one recovered by senior Josiah Copland. The Raiders then took over the ball at their own 18, and Jamal Rice broke free for a dazzling 82-yard touchdown run.
With a solid 12-0 lead, the Raiders looked to be set for another blowout victory. However, the turnovers soon began to plague Southland as well.  After an excellent Tiftarea punt placed Southland at their own two-yard line, the Panther defense returned a Raider fumble for a touchdown to trim Southland’s lead to 12-7.
After a Raider three-and-out, Tiftarea blocked Southlands’ punt, giving them excellent field position on the Southland 17. Two plays later, the Panthers were back in business thanks to a five-yard touchdown run that gave them a 14-12 lead at halftime.
The second half began with the Panthers coughing up the opening kick-off, allowing the Raiders to capture yet another fumble. Junior running back, Stephen Turton, took off on this drive, wowing both the crowd and opponents with several gritty 10-yard runs. His two-yard touchdown run cemented the drive, and after a heads-up two-point conversion by freshman Parker Weldon, Southland reclaimed the lead at 20-14.
From there, the game became a showcase for Southland’s imposing defense (including two end zone interceptions by Rice). The Raiders’ final score for the game came over a long, 60-yard drive that was finished off by a 2-yard touchdown run by Turton.
The Harvey Simpson crowd was also electric and provided an excellent atmosphere for this fun contest. Overall, the night proved to be yet another dominant showing from a young Southland team that has made great strides over the past few weeks. Look for the 3-6 Raiders to build off of this performance as they take on the Memorial Day High Matadors at home next Friday night.

Panthers setback by Worth in final home game of…