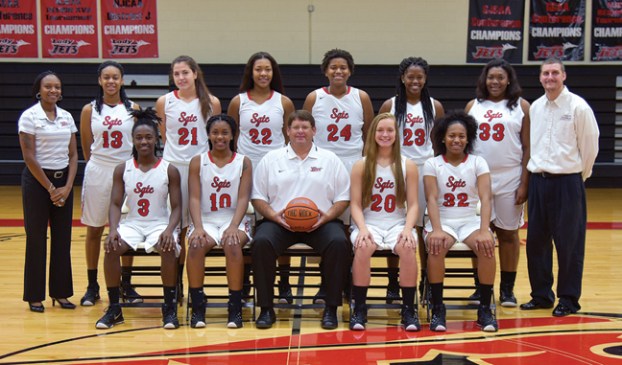 Lady Jets look ahead to another great season

They say, “the third time is the charm…”
South Georgia Technical College (SGTC) Athletic Director and Lady Jets head coach James Frey certainly hopes that the 2015-16 Lady Jets basketball team gets the opportunity to test out that theory this season. Their season officially kicks off on the road on Oct. 31 at the Darton State Classic Tournament at Darton in Albany. The Lady Jets play Southern Crescent on Oct. 31 and Summer Hill Prep on Nov. 1.
The Lady Jets captured the 2015 National Junior College Athletic Association (NJCAA) Region XVII tournament title and the NJCAA District J championship to earn their second consecutive trip to the NJCAA National Tournament in Salina, Kansas last season. That success would allow the Lady Jets to test “the third time is the charm” theory if they can put it all together and make it to the national tournament for their third straight year.
“We are excited to be in a position to defend our championship again,” said Frey. “Winning consistently is tough and it takes everyone buying into what we believe in as coaches for us to be successful. We have been working hard since late August and have seen some improvement but we still have a long way to go. We aren’t consistent day in and day out with our effort and, as a coach, I don’t want to teach intensity… they know that’s expected.”
The Lady Jets have five players returning from their 2014-15 season that ended with 28 wins and eight losses for a “Sweet 16” finish in the NJCAA National Tournament. They learned recently that their record is officially 29-8 after Hutchinson Community College had to forfeit all their games which included wins in the national tournament. That disqualification would move the Lady Jets to an “Elite Eight” finish in the NJCAA National tournament last year.
SGTC’s Lady Jets have three returning players, who started at different times last season, and two others who had significant playing time. Molly Brown, of Douglasville, a 5’10”  forward, and Cierra Bond, a 5’10” shooting guard from Inkster, MI, are both returning this season.
Both of them were selected to participate in the Top 40 NJCAA All-Star competition over the summer and Brown was awarded the NJCAA 3-D award at that event. The award was named for the late Patrick Harrington, former head coach of the Northwest Florida State Lady Raiders.
Brown started 17 of 28 games for the Lady Jets as a freshman. She averaged 9.3 points per game as well as 7.2 rebounds, 1.3 assists and 1.7 steals. She is a 46-percent shooter from the field and hit 37.7 percent of her three point shots and 73.2 percent of her free throws. She recently verbally committed to sign with Division I Southern Mississippi University for the 2016-17 season.
Bond started the last seven games for the Lady Jets in 2015 and started the NJCAA Region XVII championship game that the Lady Jets won that allowed them to advance to the NJCAA District J Championship and the NJCAA National Tournament. In the championship game, she scored nine points and had five rebounds. She averaged 8.6 points and 4.5 rebounds per game this past season as a freshman. Bond is talking with Southern Mississippi and a host of other Division I universities for the 2016-17 season.
Brown and Bond will be joined by returning point guard Brittney Delva from Tallahassee, FL, Asia Smith a 5’11” center from Irwinton, GA,  and Claudia Perez, a 6’0” power forward from Zaragoza, Spain.
The Lady Jets also secured another sophomore, Angela Thompkins, a 6’1” power forward from Punta Gorda, FL. Thompkins played her freshman at St. Petersburg Community College.
n addition to those sophomores, Coach Frey and Assistant Coach Kezia Conyers also signed four outstanding freshmen.
They are: Le’Deja James, a 5’8” point guard from Virginia Beach, VA,  Brook Burns, a  5’9” shooting guard from Hawthorne, FL, Mikaela Jones, a 6’1” power forward from Portsmouth, VA, and Kendra Green, a 5’11” power forward from Gray.
The Lady Jets went 29-8 last season, which is the second best record in the history of the women’s basketball program at SGTC.  They were 30-5 the previous season, which was the best record ever for the men’s and women’s program.
Frey has won over 20 games per year in each of his three previous years as head coach of the Lady Jets. Conyers is entering her third year as the assistant coach for Frey and has helped the Lady Jets secure their back-to-back national tournament appearances.