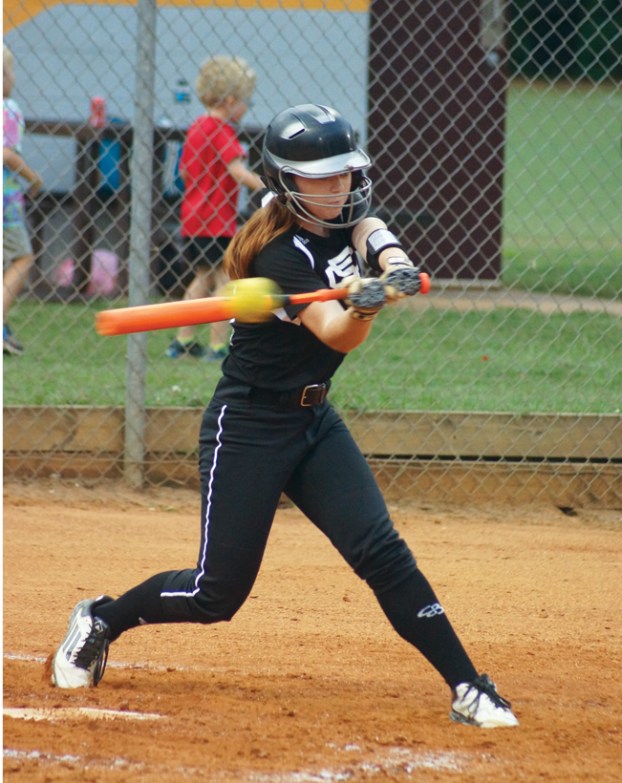 Lady Wildcats punch ticket to round two of Class A playoffs 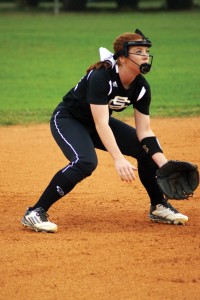 Photo by Tammy Satterfield
Schley shortstop, Bailey McClaine, prepares to scoop up a grounder in an early October match.

FOLKSTON, Ga. – The Schley County Lady Wildcats traveled to Folkston on Oct. 21 to begin the first round of the Class A state playoffs. Having plowed their way into the number-eight spot with an impressive series of wins at the end of the regular season, Schley’s ladies continued their fiery streak in the first round. In the series, the Lady Wildcats grabbed a pair of hard-fought come-from-behind victories over the Charlton County to punch their ticket to the second round of the playoffs.
The Lady Wildcats won the first game of the series 16-12 in an eighth-inning international tie breaker before besting the Lady Indians 8-7 in the afternoon’s nightcap.
With the loss, Charlton County finishes their season with a 20-9 overall record.
The Lady Wildcats will return to the diamond on Oct. 29, traveling to Columbus to take on the Baconton Charter Lady Blazers for round two of the playoffs. The Lady Blazers are currently the tournament’s overall number-one seed, entering the contest with a 20-2 overall record on the season.
The opening match of the first round was a metaphorical see-saw, with the Lady Indians and Lady Wildcats trading the lead back and forth for the majority of the game.
With the score tied 11-11 at the end of the seventh stanza, the game went into an international tiebreaker inning, in which each team started their at-bat with a runner on second.
Schley opened the inning, and the initial prognosis looked bleak for the Lady Wildcats, as Charlton grabbed two quick outs in the bottom of the frame. With a pair of outs against them and no runners on base, Schley’s girls sparked a rally that would end up sending five runs to the board before they relinquished the plate. Well into the rally, with the bases loaded, Schley’s half of the final inning was highlighted by a hard double that rocketed off the bat of pinch-hitter, Saylor Ann Cross, bringing in three RBIs and putting the game out of comeback range for the Lady Indians.
After taking the lead at the end of the frame, the Lady Wildcats played hard defense to hold off Charlton’s responding assault and clinch the victory.
Bethany Philips set the pace for Schley’s batters, hitting three for five and crossing the plate four times. Phillips stole three bases in the match.
Emily Campbell gained two hits in the match, bringing in two RBIs, and scoring once. Mindy Carol Register connected on two hits, as did Bailey McClaine, who brought in one RBI, one steal, and a pair of runs.  Register crossed the plate once.
Tosha Kirksey, Megan Cosby, Brandilyn Cromer, Taylor Norris, and Laine Frazier each contributed one RBI to the victory, with Cromer stealing one base.
Frazier pitched all eight innings, striking out three batters and giving up 15 hits. Schley’s girls connected for 12 hits in the contest.
Lady Wildcat head coach, Jody Sellars, spoke with the Times-Recorder after the win, saying, “That was a kind of sloppy game. Both teams made plenty of errors, but they made just a few more than we did. They’re a really good offensive team… one of the best teams we’ve faced this year. They really hit the ball well. Laine [Frazier] hadn’t given up a homerun all year, until this game.”
The Lady Wildcats got a slow start in the second match of the afternoon, steadily trickling in runs for the first five innings of the contest, to enter the bottom of the sixth stanza on the short end of a 7-5 gap.
Schley’s girls came back with a vengeance in the sixth frame, however, crossing the plate three times to take an 8-7 lead that they would hang onto until the game’s conclusion. With the win, the Lady Wildcats swept the series, propelling them to the second round of the playoffs.
Phillips and B. McClaine led the team’s batters in the contest, grabbing two hits apiece. Phillips contributed two steals to the win and crossed the plate twice, while B. McClaine knocked in two RBIs. Campbell, Cosby, and Cromer each connected once, with Cromer and Cosby bringing in one RBI apiece, and Campbell stealing one base.
Carley McClaine crossed the plate twice and Norris contributed two steals.
Again, Frazier pitched the duration of he match, striking out two batters and giving up 10 hits. The Lady Wildcats gained ten hits as well.
On the win, Sellars told the Times-Recorder, “We battled through some adversity in that game and had some big pinch hits. Though we didn’t play as well as we should have, defensively, we did play a scrappy game. We were just like South Georgia gnats… We just wouldn’t go away.”
On the team’s upcoming test against Baconton Charter, Sellars said, “We feel good going into it. I’m very confident that, if we play up to our expectations, we shouldn’t have any problems.”