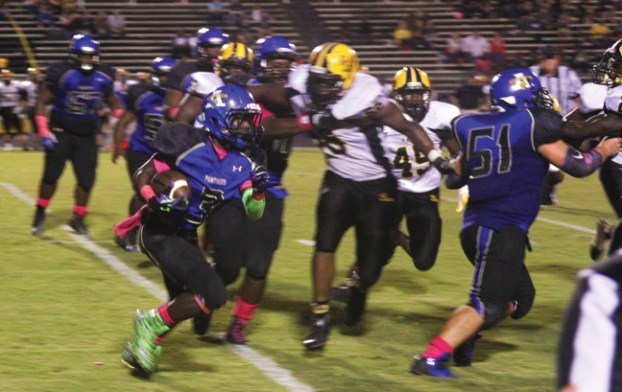 Michael Murray/Americus Times-Recorder: Eric Brown rushes down the right side of the field in the second quarter of the Panthers’ home match against Worth County on Oct. 23. 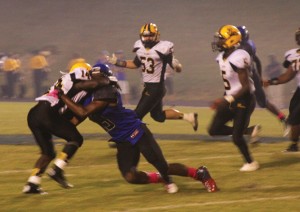 Michael Murray/Americus Times-Recorder:
Adam King drags down a Worth County opponent during the second half of the Panthers’ Oct. 23 match against the Worth County Rams in Americus.

AMERICUS – The Americus-Sumter Panthers hit their home gridiron on Oct. 23 at Finklea-Robinson Field for an action-packed night of football, and ceremonies honoring past players. Facing off against the Worth County Rams, ASHS touchdown club recognized members of the 1965, 1974, and 1975 football teams, each of which had an undefeated season that ended with a state championship win.
After keeping the first half of the match pretty close, the Panthers ran into trouble late in the game, as a series of turnovers in the fourth quarter helped propel Worth County to a 5-18 win.
The Worth squad wasted no time getting the scoring started when the action commenced. The Rams kicked off first and grabbed an early interception near the Panthers’ 33. The ensuing drive pushed the Worth County squad into the end zone three minutes into the action and a successful PAT kick put them ahead 7-0 at the eight minute mark.
The Panthers were not deterred, however, as they responded with an eight-play march that covered 52 yards. A pass from quarterback, AJ Payne, found Braylen Williams open before Eric Brown and Kobe Lewis added a pair of hard runs to push the ball into Ram territory. From Worth’s 30, Adam King made a diving catch at the four to put the Panthers in striking distance.
From there, Brown pushed his way up the gut to put the Panthers on the board with 4:49 left in the first frame. Carlos Hernandez’s PAT kick was blocked, however, leaving the visitors up 7-6.
Worth responded quickly, with a hard run that pressed deep into the ASHS red zone before adding their second touchdown of the game one minute later, putting the visitors up 14-6 early in the game.
The Panthers, once again, answered with a six-play drive that saw the team trek 65 yards for a score. The action was highlighted by a pass to Williams and another long completion by Darion Tyson that kept the drive alive when the ASHS squad was staring down fourth and eight in their own territory. Another Brown carry put the Panthers in striking distance before Williams pulled down a 27-yard pass for the Panthers’ second TD of the match. The team went for a two-point conversion but, unfortunately for the home fans, the play was broken up, holding the ASHS deficit at  14-12 with 11 minutes left in the half.
Worth used the remainder of the half to their advantage, scoring two more six-pointers and adding one PAT before the break.
The Panthers made tracks early in the second half, after putting a stop to Worth’s kickoff drive. Aided by a pass interference penalty, a pair of Payne keepers, and a completion to Williams, the Panthers pressed deep into Ram territory. Two carries by Brown landed the Americus crew at the 13 before a Ram defender went offside. Looking at first and goal from the eight, Payne bobbed and weaved through Worth’s line for the Panthers’ third touchdown five minutes into the half. The team’s two-point conversion attempt was, once again halted, stalling the Panthers’ progress at 27-18.
Worth would go on to score 28 more points on a series of unfortunate Panther turnovers in the fourth quarter to continue to expand their lead to 55-18 at the final buzzer.
The Panthers will return to action on Oct. 31, traveling to Albany to take on the Dougherty County Trojans. The Panthers have come out on top in four of the last five of the team’s tests against the Trojans.