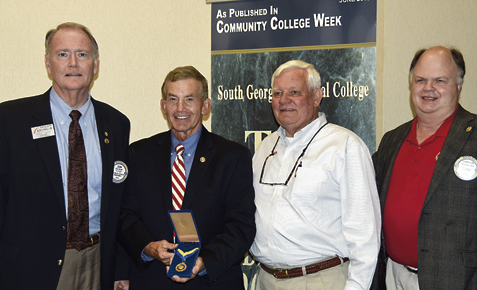 AMERICUS — South Georgia Technical College (SGTC) retiring President Sparky Reeves was honored as a “Paul Harris Fellow” at the Americus Rotary Club meeting recently. Rotary Club Past President Don Smith presented Reeves with the Paul Harris Fellow certificate, medallion, and Rotary pin on behalf of the local club.
“The Paul Harris Fellow is one of the highest honors given by Rotary and it was established in 1957. It is given in recognition of outstanding commitment to the Club or to the community,” said Smith.  “The motto for Rotary is ‘Service Above Self,’ and President Sparky Reeves has certainly exemplified this motto through every phase of his life. He is an example of the spirit of Rotary and I am honored to present this medallion on behalf of the Americus Rotary Club.”
Smith went on to thank Reeves for his contribution to education, economic development and workforce development, especially through the training of individuals entering the health care fields.  These are all major initiatives of Rotary and Rotary International and the Rotary Club Foundation.
Many notable figures have been named as Paul Harris Fellows, including U.S. President Jimmy Carter, Russian President Boris Yelstin, U.S. Astronaut James Lovell, UN Secretary-General Javier Perez de Cuellar and Jonas Salk.
Reeves accepted the medallion and said, “I am truly humbled by this recognition. I thank you for those kind words, but everything that I have been able to accomplish at South Georgia Technical College is a direct testament to the faculty, staff and students at this great college. Thank you again for this tremendous honor.”
Rotary Club President Mary Ann Crowley congratulated Reeves and also invited him to join the club each Tuesday at lunch since he might have some free time now that he is retiring.
Reeves was the featured speaker at the regular meeting of the Americus Rotary Club which agreed to meet on the campus of SGTC for his special presentation. Reeves talked with club members about the proud past of the two year technical college, the national recognition that the college was enjoying and also talked about the future of the institution.
During part of his presentation, Reeves talked about the new unmanned aerial vehicle (drone) maintenance repair technician program that the college was planning to implement. Video shot from the college’s drone was projected onto a presentation screen and then a live demonstration of a flying drone was given to club members.
“Your support is crucial to our college,” said Reeves. “Rotary has had a tremendous impact on the lives of thousands of our students through your generous donations to the SGTC foundation and to the GED program. By providing an affordable education that gives individuals the skills needed to enter the workplace, we helping families and the communities we serve.”
Reeves also mentioned that the SGTC nursing students had partnered with Rotary to help dispense flu shots throughout the community.
“That type of partnership between educational entities like South Georgia Tech and Georgia Southwestern State University and our area’s clubs and organizations is key to the success of the community. Thank you for allowing us to partner with you to make Americus and Sumter County a better place to live and to grow,” said Reeves.