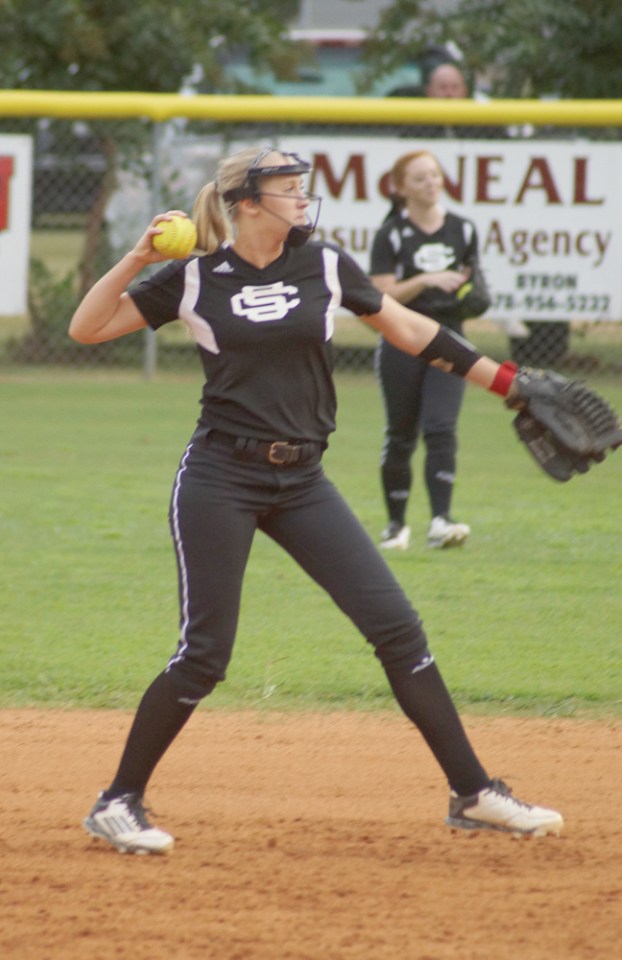 Photo by Tammy Satterfield: Schley’s Jessica Reese winds up to throw out an opponent during an early October contest.

Schley out of playoffs after tough losses to Baconton, ECI

COLUMBUS – Schley County’s Lady Wildcats know a little something about staging a comeback. In fact, looking at this year’s progression, one could easily say that they are quite knowledgeable on the subject. Having began this year’s season with a dreary 2-7 record nine games in, Schley’s girls found their footing midway through the season to drastically improve their record and progress to the GHSA Class A state playoffs.
After continuing the comeback streak a pair of solid victories last week over Charlton County in round one of the playoffs, the Lady Wildcats traveled to Columbus on Oct. 29 for the elite-eight round. Schley’s girls were pitted in a round-two morning match against the Baconton Charter School Lady Blazers, who entered the tournament ranked as the number-one seed.
The Lady Wildcats put up a hard fight in the game, barely falling short of what would have been a very exciting come-from-behind win. Ultimately, however, the Schley squad suffered a 5-4 loss.
Still licking their wounds from the defeat, the Lady Wildcats returned to the diamond the next morning to take on the Emmanuel County Institute (ECI) Lady Bulldogs. ECI took advantage of Schley’s fatigue and disappointment after the previous day’s results to push for a 10-2 win and bring Schley’s softball season to a close.
The Lady Wildcats left the field with an overall record of 13-14 on Oct. 30.
When they took the diamond to battle Baconton in the first match of the series, the Lady Wildcats got off to a slow start. The Lady Blazers steadily pulled ahead, racking up a 3-0 lead before the teams went into the sixth inning. Schley began making progress in the top of the sixth as Brandilyn Cromer knocked a drive deep into the outfield, giving Bethany Phillips a chance to cross the plate and narrow the gap to 3-1 before the Lady Wildcats relinquished the plate.
Baconton responded at the bottom of the frame, pushing across one more  runner to maintain the margin as the teams headed into the final stanza.
Back at the plate, the Lady Wildcats sparked a rally, this one also off Cromer’s bat, that would net the team three more runs, equalizing the score at 4-4 and forcing an overtime inning.
The Lady Blazers held Schley scoreless in the top of the appended frame and bought a runner in when they returned to the dugout, snagging the win.
Cromer paced the Lady Wildcats’ batters in the match, hitting an impressive 3-4 and bringing in three of the team’s four scorers. Phillips batted in the remaining run on her sole hit of the match. Phillips contributed one steal to the team as well, and crossed the plate twice. The second opportunity came after she was hit by an errant pitch.
Emily Campbell contributed two hits while Tosha Kirksey and Sailor Ann Cross each scored after drawing walks.
Laine Frazier pitched the entirety of the game, giving up eight hits and striking out three batters.
“We just didn’t hit the ball well,” said Lady Wildcat head coach, Jody Sellars. “We didn’t make the needed adjustments until late in the game.”
The next morning, the Lady Wildcats returned to action, taking on ECI in a bid to keep the team’s championship hopes alive. ECI quickly showed Schley’s girls that they meant business as a pair of homeruns gave them a large lead in the match, dashing the Lady Wildcats’ chances at a comeback after the sixth inning with a 10-2 win.
Emily Campbell and Sailor Ann Cross each crossed the plate for Schley in the test, while Phillips contributed one steal.
After the games’ conclusions, Sellars discussed the future of the Lady Wildcats program, saying, “We will be losing eight seniors this year. We have some rebuilding to do. We’ll need to replace our entire outfield, as well as the shortstop position and the second and third basemen.”
Sellars went on to say, “We will have a lot of experienced players still on the field and some promising players coming up from the middle school. I call it a rebuilding year, but I think that we can return to be just as good next year.” 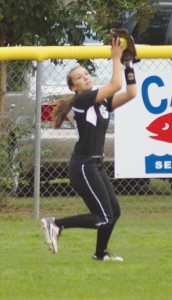 Photo by Tammy Satterfield:
Schley’s Bethany Phillips pulls down an opponents’ fly ball deep in the outfield during an early October contest.

By MICHAEL MURRAY and RONALD FORDHAM AMERICUS – Fresh off of a pair of well-earned wins over the Westwood Wildcats... read more