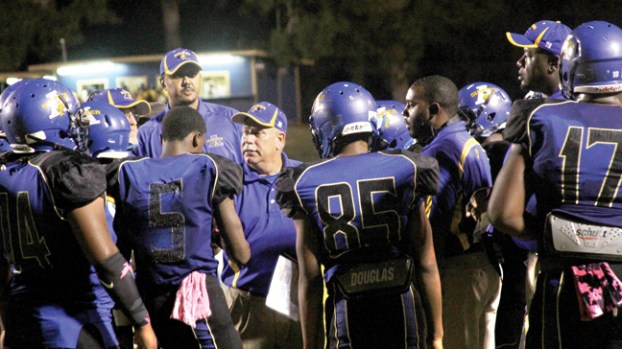 Panthers claw their way to 34-14 win over Trojans

By MICHAEL MURRAY
and DOUG GOODIN

ALBANY – The Americus-Sumter High School (ASHS) Panthers geared up and hit the road for Albany on Oct. 31, taking on the Dougherty County Trojans in a region 4-AAAA match-up. Spectators at the Halloween night test got to see the Americus crew bare their fangs as the team clawed their way to a significant 34-14 region win.
The Panthers took the opening kick off and proceeded to push their way down the field on a six-play march that was highlighted by a 71-yard run by Eric Brown, landing the team in their opponents’ end zone. Panther place kicker, Carlos Hernandez, booted one between the posts to give the visitors a 7-0 lead two minutes into the action.
Halfway through the second frame, the Panthers took off on another scoring drive that spanned eight plays and 62 yards. The trek concluded when quarterback, AJ Payne, found receiver, Adam King, open in the end zone. King pulled down a 27-yard pass to add another six-pointer to the Panthers’ lead. Hernandez then split the uprights, putting the Americus team up 14-0.
On the Trojans’ answering drive, the Panthers snagged an interception on the outskirts of the Dougherty red zone. Two plays later, Payne saw another scoring opportunity when he hurled an 18-yarder that was deftly caught by Braylen Williams for another touchdown. Hernandez, once again, showcased his kicking skills to pad the Panthers’ advantage by 21 points before going into the break.
The teams traded possession several times when the action resumed before Dougherty took the ball at their own 40 and began a hard push to narrow the gap. The Trojans broke the plane six plays later, but their PAT attempt fell short, holding the comeback drive to only six points as the possession-trading resumed.
The Panthers saw the window of opportunity open again late in the third quarter when Kobe Lewis returned a punt to Dougherty’s 24. Brown proceeded to add another 23 yards to the Panthers’ progress on the next play before Lewis ended the march with a one-yarder that expanded the gap by another six points. Hernandez missed his first kick of the night, leaving the Panthers up 27-6 as the teams headed into the final frame.
The Panthers struck once more 2:30 into the fourth period on an exciting play that had the visitors section of Hugh Mills Stadium cheering. With 9:30 left in the contest, Panther defensive lineman, Michael Bridges, pulled in a Dougherty pass and showed his Trojan pursuers the back of his jersey as he sped his way 76 yards into the end zone. Hernandez made up for the earlier missed point by firing the ball straight through the goalposts, to give the Panthers 34 points.
Unwilling to give up, the Trojans added another touchdown 10 plays into their return drive and pulled off a successful two-point conversion to bring the game’s final score to 34-14.
The win marks the second region win for the Panthers this season and leaves the team with a 3-6 overall record on the season. Americus-Sumter will return to the gridiron for their final test of the regular season on Nov. 5, traveling to Albany to take on the Monroe Tornadoes. The Tornadoes currently have an overall record of 5-4.

AMERICUS – Forward Silvio Polly scored with 2:02 left in the second half to lift Georgia Southwestern to a 1-0... read more