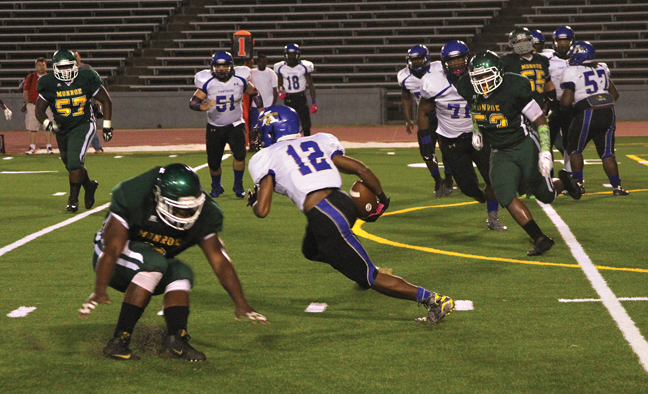 Michael Murray/ Americus Times-Recorder: Michael Terry weaves around a Monroe defender after pulling down a reception during the first quarter of the ASHS Panthers’ Nov. 5 match against the Tornadoes in Albany.

ALBANY – The Americus-Sumter (ASHS) Panthers wrapped up their 2015 season on Nov. 5, fighting to the very last second against the Monroe Tornadoes in Albany. Despite the Panthers putting forth one of the hardest efforts that the team’s fans have seen this season, the ASHS crew fell 25-19 in the season closer. Following the defeat, the Panthers returned to the locker room with a 3-7 record on the season.
Both teams got a slow start in the match, trading possession eight times during the first quarter before any points were sent to the board. There were several highlights in the first quarter, from the Panthers’ perspective. On Monroe’s first possession, the Tornadoes pressed forward towards the goal and, eventually the Panthers were defending their goal line from their own six with four downs to go. After an apparent touchdown was called back due to a Monroe holding penalty, Panther sophomore, Jakhari White, managed to turn the tables on the Tornadoes by grabbing an interception.
On the Panthers’ return drive, a long pass from quarterback, AJ Payne, was pulled down by Daveon Johnson to push the ball to midfield, but the drive was halted soon after.
Near the end of the first frame, Michael Terry expertly caught another of Payne’s tosses for significant gain, but the play was flagged and called back.
Eventually, with 30 seconds left in the first frame, the Tornadoes took possession on the ASHS 38 and took off on a 13-yard run that was abruptly brought to a halt by a jarring hit by Johnson. The Tornadoes found a chink in the Panthers’ armor on the next play, however, as Monroe’s quarterback found a receiver in the end zone for a 25-yard touchdown. The extra-point kick was good and the Tornadoes took a 7-0 lead with six seconds left in the first.
The Panthers responded on their return, with an 11-play march that spanned 71 yards and ate up four minutes of clock time.
Three plays into the drive, Payne connected with Eric Brown on a 20-yard pass. As Brown jumped to make the catch, a Monroe defender jumped up and got a hand on it as well. The pair battled for control as they fell, with Brown coming out on top when the referee made the decision in favor of the Panthers. Two plays later, Johnson made an exciting diving catch to put the Panthers in Monroe’s red zone. A trio of handoffs to Brown pushed the Panthers to their opponents’ five before Payne broke the plane with a keeper up the gut, narrowing the gap to 7-6. Carlos Hernandez split the uprights on the PAT, but the play was called back on a holding penalty. Hernandez’s second attempt was blocked, leaving the Panthers down by one when they turned the ball over to their hosts.
The Tornadoes wasted no time on their return, picking up the Panthers’ bouncy kickoff and taking it all the way back with 7:30 left in the half to add six more points to their lead.
One minute later, the Panthers tied the score after Brown capped off a five-play drive with a 32-yard touchdown run. Receptions by Johnson and Jacquez Bartley brought the ball across the field to the 32, before Brown zigged and zagged through Monroe’s defenses to score another six for the Panthers. Hernandez’s accurate kick was not called back this time around, equalizing the score at 13-13.
The ball changed hands twice before the scoreboard saw any more action. A long run by a Monroe back was eventually stopped by Douglas, but not before the rusher had plowed his way to the ASHS 20. Two plays later, The Tornadoes’ quarterback found a receiver across the goal line. The team’s PAT attempt fell short, halting their progress at a 19-13 lead. before the half-time break.
Americus struck again seven minutes into the third quarter on a nine-play trek that tied up the score once more. Douglas contributed 15 yards from the starting point at the 10, with a reception before a hard run by Kobe Lewis added another seven. A completion by Braylen Williams, aided by a roughing penalty, landed the Panthers at their opponents’ 40. Payne added 13 more yards to the stats before Lewis took a pair of rushes up the gut for the score to the cheers of the Panthers’ fans. Hernandez lined up for the kick and the crowd watched expectantly, anticipating the Panthers taking their first lead of the game. The fans’ hopes were dashed, however, when the ball bounced off of the right pole in a heartbreaking turn that left the teams tied 19-19.
As Monroe mounted their comeback, their progress was brought to an abrupt stop when Darion Tyson intercepted a pass and bulldozed his way back to the ASHS 26. Not to be outdone, the Tornadoes held the Panthers to three and out on their return, retaking possession at their own 32.
The teams traded the ball twice more, with the Panthers pulling off an exciting goal-line stand on Monroe’s first attempt. Monroe put the game’s final points on the board with a six-play drive that ended with a pass into the Panthers’ end zone. Monroe’s extra point fell short, holding their lead at 25-19.
The Panthers received their last possession of the game with 30 seconds left on the clock and began to stage an exciting series of plays, mounting their comeback. From their own seven-yard line, the Panthers completed two long passes to make it to the fifty. On the third pass attempt, with 17 seconds left, Payne’s pass was broken up by a diving Monroe defender, who bobbled the ball and caught it as he fell, dashing Americus’ hopes of a comeback.
The intense match saw the Panthers at their fiercest and showcased the talents of many of the team’s senior players.
With a young, talented crew set to return next year and the direction of Head Coach, Erik Soliday as well as the rest of the coaching staff, the Panthers will certainly be ready to return to the gridiron next year for an exciting season. 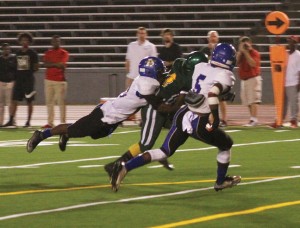 Michael Murray/ Americus Times-Recorder:
Mikal Douglas makes a leaping tackle on a Monroe running back as Kobe Lewis approaches for the assist in the first quarter of the ASHS Panthers’ Nov. 5 match against the Monroe Tornadoes in Albany.