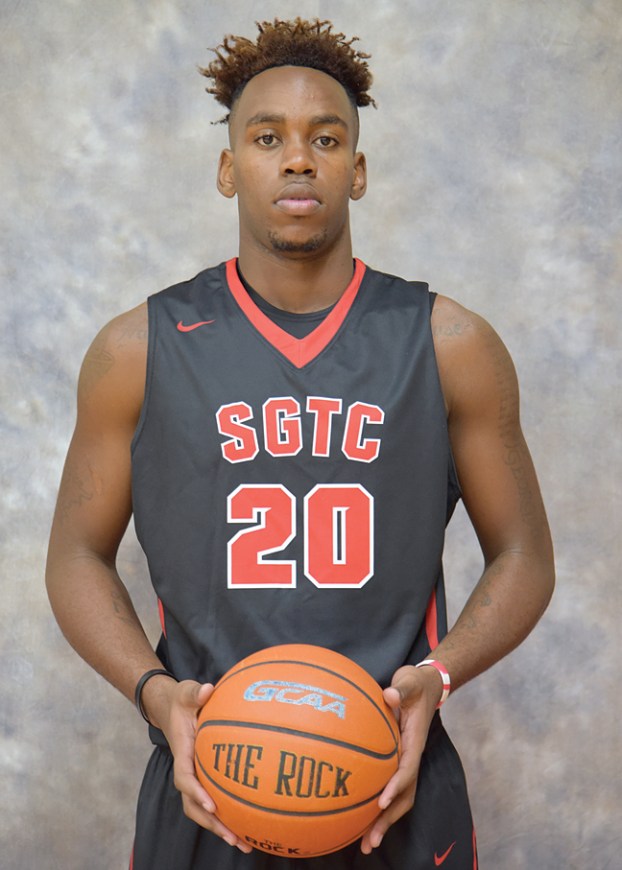 Submitted by South Georgia Technical College: Demario Beck (20) was the top scorer for the Jets in both contests this past weekend.

South Georgia Technical College’s new men’s head basketball coach, Travis Garrett, and the Jets opened the 2015-16 intercollegiate basketball season with back-to-back impressive wins over Pensacola State College and Gulf Coast State College in the Pensacola Classic in Pensacola, FL. this past weekend.
The Jets defeated Pensacola State College 69–63 on Oct. 30 night and then came back on Nov. 1 to defeat Gulf Coast State College 71–68 to give Coach Garrett his first wins as the Jets head basketball coach.
“This was a great start for us and we were certainly the underdogs,” said Coach Garrett. “All of the critics doubted that we would go in and be able to compete much less compete and win both games against two really good teams in Pensacola and Gulf Coast. But that’s why you put on the uniform and compete.”
Garrett also said that he was “very proud of my young men. They handled some adversity and we were able to win two games on the road. We are pleased with this win, but we want sustained success so we will continue to work and get better.  It was also great to have Vice President of Academic Affairs Dr. John Watford’s support during Friday’s game.”
Demario Beck, a sophomore forward from Cochran, was the leading scorer for the Jets in the 69-63 win over Pensacola. He had 11 points, eight rebounds, and two blocked shots.
Sophomore forwards, Amir Warnok and Corbyn Jackson, were the only two other players in double-figures for the Jets in that game with 10 points each.  Jackson had eight rebounds and Warnok had four.
Freshman guard, Rico Simmons from Wilkinson County, added nine points, three assists, and three rebounds. Freshman guard, Patrick Welch, and sophomore guard, Jamal Norman, both added seven points.
The Jets were up 39-34 at the end of the first half and continued to outscore Pensacola State 30-29 in the second half to capture the 69-63 victory.  South Georgia Tech led by as many as 14 points in the first half.
In the second game of the tournament, the Jets were able to build on that momentum from the first victory and take a narrow 71-68 win over Gulf Coast State. The Jets had an impressive 40-28 lead at the end of the first half, but Gulf Coast roared back in the second half to close that gap to within three points.
Warnock and Beck from Cochran were the top scorers in that game as well, with 12 points each. Beck also had 11 rebounds. Jackson was the only other player in double figures with 10 points. Clarence Smith, a sophomore from Valdosta had nine points and freshmen guards Torico Simmons and Patrick Welch both tossed in eight points each.  Simmons also had five assists.
The Jets will host Faith Prep on Nov. 11 at 7:00 p.m. in the Hangar and then travel to the Hillsborough Community College Classic on Nov. 13-14 in Tampa, FL.
They will take on Dayton State and TAAG Academy. The Jets will play Chipola College in Marianna, FL on Nov. 18 and then participate in the South Georgia State Classic in Waycross on November 20-21. They will host Combine Academy on Nov. 23 in the Hangar at 7:00 p.m.