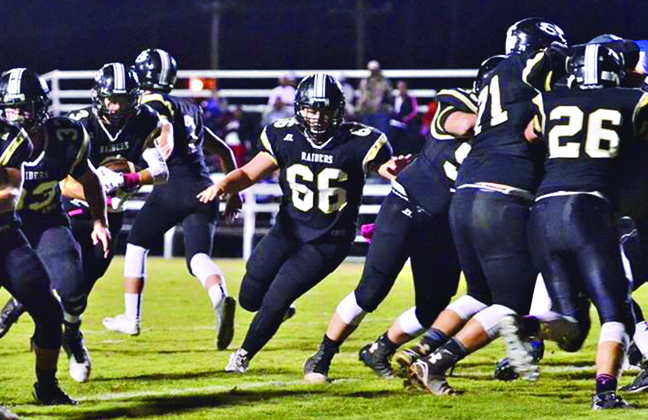 Photo by Dawn Shattles: Townsend Ray (3) carries the ball up the middle as his teammates, Mitchell Goodin (66), Dylan Lopez (71), and Josiah Copland (26) block during the Raiders’ final home match of the regular season against Memorial Day.

LOGANVILLE – With the team’s regular season now firmly in their rear view mirrors, the Southland Academy Raiders set their sites on much larger competition on Nov. 6; the GISA AAA state playoffs. That evening, the Raiders traveled to Loganville to take on the previously undefeated Loganville Christian Academy Lions.
Field conditions were muddy on the gridiron that night, as the teams battled mightily in the drizzling rain. In spite of a very strong effort from the visiting Raiders, the Lions prevailed in overtime 27-20 as the two teams duked it out for the right to proceed to round two.
With the loss, the Raiders close the curtain on the 2015 season with a 3-8 overall record. Loganville’s record improved to 10-0.
Five minutes after the initial kickoff, the Raiders lit up the scoreboard with a defensive touchdown, sparked by an interception by Jamaal Rice, who ran the ball back 45 yards into the end zone.
Raider place kicker, Stephen Barnes then precisely split the uprights to give Southland a 7-0 edge.
Both teams stubbornly refused to give up enough ground to change the score in the second frame and Southland held on tightly to their seven-point lead until the half-time break.
The Lions made their move in the third quarter, steadily pressing towards Southland’s goal before Loganville’s John Heart broke the plane on a one-yard run with four minutes left in the stanza. Heart then added an extra point with an accurate boot through the goalposts to equalize the score, 7-7.
Halfway through the final quarter, the Raiders scored on a one-yard touchdown rush by Stephen Turton that capped off a seven-play, 33 yard drive. Another good kick by Barnes put the Raiders up 14-7.
Four minutes later, Loganville pressed into Southland’s red zone before quarterback, Donovan Taite completed a pass into the end zone. The PAT was good, leaving the score tied 14-14 at the game’s conclusion as the teams prepared for an overtime period.
The Raiders struck first in overtime, with another touchdown run by Turton. This time, Turton came in from the six yard line after the Raiders had pressed 19 yards on four plays. Barnes’ kick fell short, stalling the Raiders’ advantage at 20-14.
When the ball was returned to Loganville, the Lions answered promptly, rushing for a touchdown of their own. Loganville missed their PAT attempt as well, and the score remained tied 20-20.
The Lions made a hard defensive push after relinquishing the ball to the Raiders and kept the visitors from pulling ahead on their next possession.
Despite the best efforts of Southland’s defense, the Lions added another six-pointer on their next drive, pulling ahead for the final time to take the 27-20 win.
Southland gained 144 total yards in the match, with the team’s determined defense holding the Lions to only 178. Quarterback, Alex Roach, connected on one 14-yard pass to Parker Weldon.
Turton was the main ground-gainer for the Raiders, contributing 124 yards on 24 rushes. The Raiders gained 10 first downs in the match, while holding Loganville to only seven.
The Raiders will lose five seniors to graduation this season; Kurtis Andrews, Brandon Revell, Bo Moore, Josiah Copland, and Taylor Weldon. With a great deal of young talent on the team, the Southland crew will certainly be rested and experienced when they return next year and should show some great gridiron action to the school’s fans.