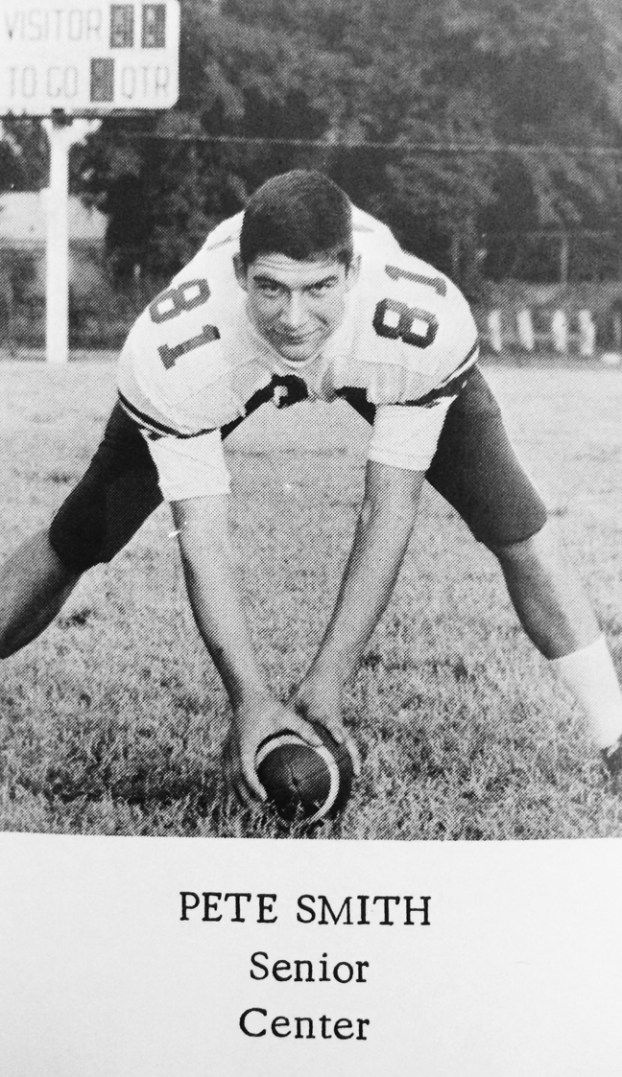 Submitted by Kellette Wade: In this photo, taken from the Americus High School Class of 1966 yearbook, Panther center, Pete Smith, shows off his pre-snap stance.

Editor’s Note: Here at the Americus Times-Recorder, we’re very proud of our area’s rich history of sporting excellence. One of the area’s most celebrated historical periods of athletic prowess was the Americus High School Panthers’ 1965 season, in which the team went undefeated, rolling over opponent after opponent on their way to a sweep of the state championship series.
While delving through our back issues and expansive archives, we have uncovered a wealth of photographs and articles written by former Times-Recorder sports editor, the late Clarence Graddick, during that era.
After dealing the 34-6 defeat to Mitchell County and giving up the team’s first touchdown of the season, the Americus Panthers licked their wounds and took a well-earned break the next Friday night. With their ticket already punched for the region championship against Cook County, who had dealt an upset to Fitzgerald, the Panthers took the time to rest and prepare for the upcoming match.
Before the region championship game, however, the Panthers were scheduled to compete one more time. This time, the team would take on Class AA challengers, the Thomasville Bulldogs.
With Thomasville’s undefeated record (which we are all aware would be spoiled soon enough), the Bulldogs were solid contenders for the region 1-AA title. Thomasville’s head coach reportedly decided that, rather than risk an injury to one of the Bulldogs’ starters at the hands of the mighty Panthers, he would give the first string the night off and allow the team’s subs to gain some valuable experience. This decision was made at the risk of the Bulldogs acquiring an unsightly blemish on the team’s season-long winning streak.
According to Graddick in a Nov. 11, 1965 article titled, “Healthy Panther Squad Set To Clash With Thomasville”, Panther head coach Jimmy Hightower stated that, “He would start his regular team against Thomasville since the players need action after an open date last week. Americus is also concerned with a play-off which comes up Friday of next week.”
Undoubtedly, there was talk around town that Thomasville’s helmsman didn’t want to run the risk of having the team’s Class AA starters’ streak spoiled by the Class A Panthers, but that is a question whose answer is long lost to the ages. What is certain, however, is that the Panthers would have showed up prepared to face whatever team stepped onto the field that night and, had Thomasville brought their most talented players to the gridiron, the outcome likely would not have changed very much.
When game day finally arrived, the Panthers, of course, dealt a savage blow to Thomasville’s second string players.
The day after the game, as the nation anxiously awaited news on Dwight D. Eisenhower, who had recently suffered a heart attack, the Times-Recorder published an article about an upcoming visit by “The world’s strongest man,” Paul Anderson, who was scheduled as a guest speaker at the Lee St. United Methodist Church. The edition’s also included an article on Sumter County High School’s upcoming region championship match.
Also in the Nov. 13, 1965 edition of the Americus Times-Recorder, Graddick gave local readers a detailed account of the previous day’s Panther gridiron action in an article titled, “Panthers Finish Undefeated Season With 27-0 Win”.
A portion of this article is shared below:

Panthers Finish Undefeated Season With 27-0 Win: Starters In Only 12 Plays On Offense In Entire Game

ATR File Photo:
In this ‘Sportingly Yours’ column from the Nov. 12, 1965 edition of the Times-Recorder, Graddick details the Panthers’ upcoming match against Class AA, Thomasville. 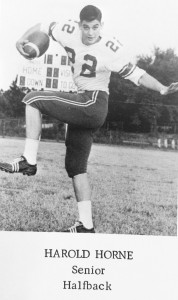 Submitted by Kellette Wade:
In this photo, taken from the Americus High School Class of 1966 yearbook, Panther fullback, Harold Horne, shows off his rushing stance.

AMERICUS, Ga., – The Thomasville Bulldogs were definitely no match for the Americus High Panthers here Friday night as the Panthers rolled to a 27-0 win to wind up the season undefeated in 10 games but with a 0-0 tie on the record.
The approximately 1,500 fans watched a strange sight in a steady drizzle during the first half as a group of Thomasville subs managed as well as they could against the Americus first string for 15 minutes then subs of both teams battled it out the rest of the way. Thomasville head coach, Joe Summerall, withheld his top 15 players as he had announced he would do before the game. The Bulldogs have a date with Tift County in Albany Monday night for the championship of Region 1-AA West and the winner will meet Wayne County on Saturday night for the region championship. This is the reason for the decision by Sumerall to hold out his first string and sacrifice a possible unbeaten season in hopes of gaining a shot at the state [Class AA] title.
Coach Jimmy Hightower needed to play his first string since, after an off week last week and a Region 1-A title game with Cook County coming up next week, also in Albany, there was a danger his starters would go stale. The Americus first-stringers used only 12 offensive plays, 10 running and two David Reeves passes, and a defensive touchdown, to account for the scores and then took a rest.
Mike Fennessy started a two-play touchdown with a 13-yard gallop and David hit cousin Gary with a 32-yard pass for the score. On the next play, David’s kick for the PAT was wide.
Harold Horne, right halfback, went in from the 10-yard line to score on the fourth play of a 25-yard drive the next time Americus had the ball. David made his kick good on this point-after try for a 13-0 lead.
A 65-yard bomb by the Reeves cousins accounted for the next score and the Americus regulars called it a night after David kicked the extra point. Only twice more did they enter the game and only for long enough to bail out the subs. Gary scored two touchdowns and also set up the chance with a pass interception.
A defensive stint that lasted only two plays wound up in a 98-yard touchdown run by Bill Chambliss with an intercepted pass. David added the final point with a line-drive kick. Horne threw a key block for Chambliss at the Americus 45 and no one else was even close.
A clipping penalty against the youngsters on a punt return left Americus in trouble early in the fourth quarter and, since it was obvious Americus wanted no scoring by the Thomasville subs, the first string came back. It almost netted a touchdown as on third and five, David rolled o his right, turned the corner, and began weaving goalward. He stopped to change direction, however, and was caught from behind for only a 59-yard gain.
That was the last of the starters and the subs handled the situation easily from there on out. They even managed an apparent score late in the last quarter as Jimmy Sanders moved in with his B-team buddies, at fullback, and circled left on a nice run with good blocking and went 42 yards across the goal…
———————————–
Graddick went on to describe how the Panthers’ “ stingy” first-string defense and held the Thomasville boys to only one yard in the first quarter. As a matter of fact, the Panthers’ starters gave up only four yards the entire time they were on the field.
Throughout the match, the Panthers’ starters and subs amassed 225 yards gained, with 112 coming on the ground and 113 through the air on four completions. All the while, Thomasville picked up 83 yards rushing and 24 yards passing for a total of 107.
Following the win, the Panthers set their sights on much larger prey as they prepared to face Cook county once more for the region 1-A title. As Cook County had given the Panthers a very tough game just three weeks before, the Americus High squad must have known that they would be in for another very tough match.
———————————–
Former Panther center, Pete Smith, recently spoke with the Times-Recorder about the 1965 team. Asked to what he would attribute the team’s success, Smith said, “I just think that the camaraderie that we had and the leadership among the team [was a major factor] … Our seniors really got out there and hustled and made the game go fast and made practice go fast.”
Smith continued to ascribe the team’s series of triumphs to the friendship shared between the players. “If you saw one of the football players after practice or after a Friday night game, the rest were close behind,” he said. “We were always together. We were a pretty good nucleus. We did things together. Coach Finklea always had a dance after the football game out at the rec. department. It was a lot of fun. There were a lot of things to do. We got to meet people and dance and have fun…”
“We just were very successful,” he concluded. “I mean, I’m not bragging about the scores, but no other team was doing that… We just had a great bunch of guys that liked to hit, liked to block, liked to tackle… I think that had a lot to do with [why we were so successful].”
———————————–
Be sure to visit us next week as we continue to explore the Panthers’ epic 1965 season, with the details of the team’s exciting rematch against the Cook County Hornets as Americus battled for the Region 1-A title. We will also include excerpts from ATR interviews with even more former Panther members.

From STAFF REPORTS americustimesrecorder.com AMERICUS – Georgia Southwestern’s Hurricanes scored 53 points in the second half to pull away from... read more