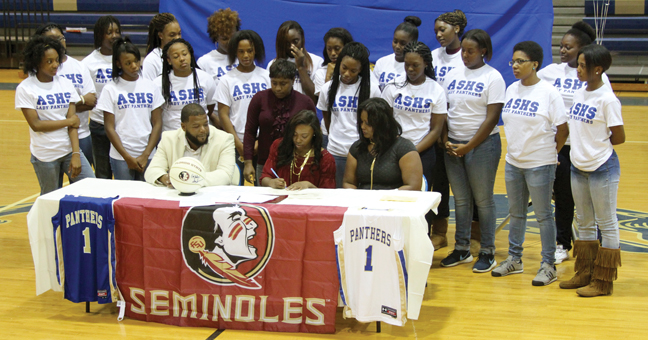 Michael Murray/Americus Times-Recorder: Gaulden, center, signs her national letter of intent to play basketball for FSU as her parents, on either side, look on. Lady Panther head coach, Sherri Harris, looks over Gaulden’s shoulder as her Lady Panther teammates stand in the background.

AMERICUS – Lady Panther point guard, Atyanna Gaulden, inked a national letter of intent to play basketball for Florida State University (FSU) on Nov. 11 in a signing ceremony at the Americus-Sumter High School (ASHS) gym. The ceremony was attended by dozens of supporters of both Gaulden and the Lady Panthers
Prior to Gaulden signing the acceptance letter for a full scholarship to FSU, the crowd heard from Lady Panther head coach, Sherri Harris, and Rick Jones, coach of the Georgia Sparks.
Each of these individuals had wonderful things to say about the talented senior athlete. During his introductory speech, Jones described Gaulden as a very hardworking individual who has shown real dedication since he began coaching her as a member of the Georgia Sparks many years ago.
Harris then discussed Gaulden’s high school basketball career, saying that Gaulden has scored just short of 1,000 points for the Lady Panthers. Gaulden has also contributed over 600 assists and over 700 steals to the team’s impressive seasons. “She’s quite exciting to watch,” Harris told the crowd. Harris described Gaulden as a team leader who cares deeply for her teammates and helps to ensure that the team’s players work as a unit. “Over the last three years… she has gotten [much better],” Harris added. “When she first started playing for me in the eighth grade, we went [down to Florida to play basketball]… She was turning heads left and right… As we moved on, she continued to improve and the girls started gelling.”
Harris went on to say that Gaulden has silenced her share of detractors on the basketball court, who would often criticize her aggressive style of play. “As she’s progressed into a true point guard, I think, she has shut down a lot of her critics,” Harris stated. “That’s why we have seen, in the last three or four years, her national ranking [improve]. She has gone from, probably, 120-something to the top 20. We have come a long way. Me personally, I might be biased, but I think we may have one of the best point guards in the country.”
ASHS principal, Kimothy Hadley, then spoke to the crowd, saying, “The last person that [ASHS] had sign to a division-1 school for ladies’ basketball was in 1996. That was Niya Butts, who is the current head coach at the University of Arizona…” Hadley went on to express his gratitude for all that Gaulden has done for the Lady Panthers and wish her the best of luck before Harris gave her the papers to sign.
As the ink was drying, Gaulden addressed the crowd. “I’d like to thank God first, because this wouldn’t be possible without him,” she said before thanking her family and coaches for their un-ending support. She also thanked her teammates and the Lady Panthers’ supporters.
After the signing, Gaulden spoke briefly with the Times-Recorder. “I started going to camp at FSU] in the fifth grade,” she said. “Coach Sue [Semrau] wasn’t there at the time… She was coaching the USA girls’ basketball team, but I met the assistant head coach, Lance White, and fell in love with the whole coaching staff. The staff is very energetic… I met Coach Sue the next year. When I met her, I was like, ‘There’s no better place to go but there.’”
Gaulden said that she had received offers from many other schools but, aside from FSU, had only given the University of South Carolina any serious consideration. “I went with Florida State because it’s like a second home to me,” she said.
Asked if she has been playing basketball her whole life, her face lit up as she answered, “Oh yeah. Since I was seven… My uncles [got me interested in basketball]… One of them [played for] Liberty University. They used to take me out to play basketball all the time.”
Gaulden went on to say that she would like to study information technology and web design while attending college.
During the Lady Panthers’ 2014-15 season, Gaulden led the team to a 29-2 record, culminating in an elite-eight appearance in the state playoffs. She averaged 21 points, seven assists, five rebounds, and four steals per game.
Gaulden was named Player of the Year during that season, as well as Atlanta Journal-Constitution first-team region four, and Albany Herald first-team. She has also been nominated to participate in the McDonald’s All-American Game in Chicago in March.