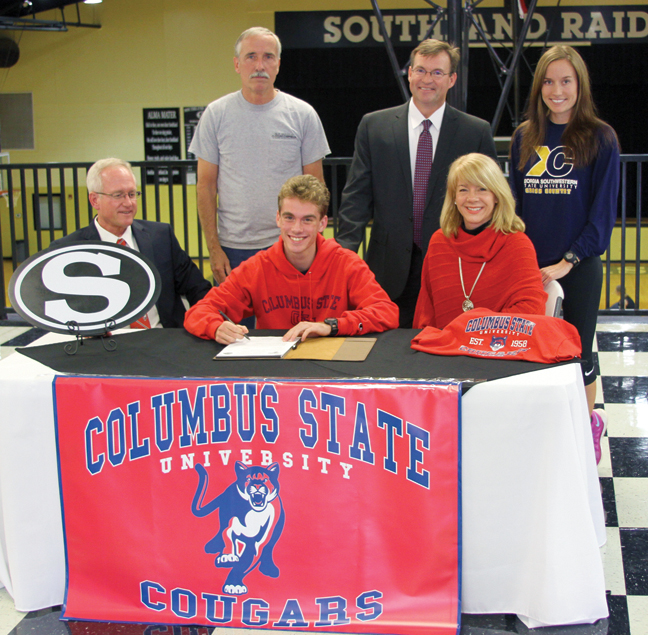 AMERICUS – Southland Academy cross country runner, Wright Calhoun, signed a letter of intent on Nov. 11 to run for the Columbus State Cougars after graduation.
Calhoun finished the 2015 cross country season as a state runner-up and helped lead the Raiders to their third consecutive state championship this year.
“I started running in the summer of my eighth grade year,” Calhoun told the Times-Recorder after the ceremony. “I really fell in love with the sport. Ever since my freshman year, I’ve been wanting to run in college.
Asked what initially sparked his interest in competitive distance running, Calhoun said, “It’s mainly the people. I like talking to everyone that I compete with. I like [winning races] (or, sometimes, [losing races]). You never know. Everybody races differently… It’s just such a fun competitive sport. Everybody’s happy because, while you’re out there on the course, you’re sharing the pain with each other. Then, after the race, you talk about it and meet new people. You make new friends and meet girls. The community is just great. I love cross country.”
Calhoun said that he, initially, was not interested in attending Columbus until he actually visited the campus. “I’d visited several colleges before,” he said. “I was kind of like, ‘Oh. This is cool…’ I was expecting Columbus state to not be as good as [my friend described it], but it lived up to her description, and I fell in love with the program there. I really like the coach there. He’s great friends with my current coach (Bruce Skiles), so I’ll be able to stay in touch with both of them.”
“I also like the people on the team,” he continued. “I got to meet them. I love the campus. It’s just a great school and it’s fairly close to home, but it has that faraway feel…”
Calhoun said that he has not decided which course of study to follow in his college career, stating, “I’m going to see what I’m interested in once I get there.”
Calhoun is also a member of the Raiders’ track and field team.
Asked about his achievements on the cross country course over the last several years, Calhoun humbly stated, “’Goals’ is a better way to say it. My main goal was to get, at least, in the [fifteen-minute range] by my senior year. My sophomore and junior years, I barely achieved anything. I didn’t do very well. It was my last year, this year, that I finally broke back into it and started training really hard again. I rapidly improved and actually got my goal.
I’m a national athlete,” he added. “When I broke [a time of 16:30], I think I was a second-team national athlete. I think that, once you break either 16:00 or 15:45, you get put on first team. I got a 15:54, so I may or may not be on the first team. I have two more races. We’ll do the Junior Olympics in Fayetteville and a Foot Locker race in Charlotte, NC. and I hope to break 15:30 by then… or 15:40 at least.”
Calhoun has helped lead the Raiders to a first-place finish in the state tournament for three consecutive years. “We’re a family,” he said. We work together. Every year, we’ve had some sort of obstacle that we’ve had to overcome. We have not been expected to win any of the years except this year… [The Raiders’ cross country runners] all work with each other. We all get along great and I’m going to miss them in college.”
Calhoun went on to say that he is looking forward to figuring out what he wants to do later in life. “My main goal later in life is for these to not be my best days,” he said. “I want to have better days in the future and for my life to continue improving… [I want to] find a job that I love and enjoy and have fun with my new career. I’m excited to get started.”
Asked if there was anything else that he’d like to add, Calhoun exclaimed, Go Cougars and Raiders!”
Southland cross country coach, Patrick Calcutt spoke with the Times-Recorder after the ceremony as well, saying, “Wright was a kid who had been a swimmer and had dabbled in tennis. He came out as a middle school runner and really showed some flashes. He started working on the side with Bruce Skiles and working in our distance program. He broke our school’s 5K record on his first race as a freshman in cross country and he just never looked back.”
Calcutt continued to praise Calhoun’s prowess on the cross country course. “He is a four-time region champion and has rarely lost on [the Southland] course,” he stated. “While he’s been here, our team has dominated the region. I know that cross country is a team sport. It takes five or six guys to do well, but it helps when we can pencil in a guy near the front of the race every time. That’s Wright Calhoun. I get to see Columbus State’s team run in the area often and I’m looking forward to seeing Wright running on Fridays ad Saturdays for Columbus State.”