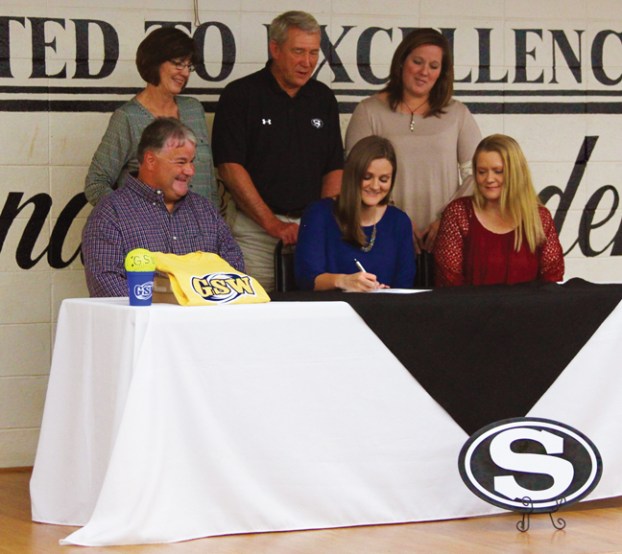 AMERICUS – On Nov. 18, the Southland Academy Lady Raiders’ third baseman, Christina Davis, signed a scholarship and letter of intent to take her softball career to the collegiate level with the Georgia Southwestern Lady Hurricanes during the 2015-16 season. The signing ceremony, held on the Southland Academy campus, was attended by dozens of Davis’ teammates and fans, who extended their well-wishes to the talented young athlete.
After inking the paperwork and receiving congratulations from many of her supporters, Davis sat down for a brief interview with the Times-Recorder.
Asked how she came to the decision to attend GSW, Davis said, “It’s local, so I like that about it. A lot of [former] Southland players play on the GSW team… people that I played with last year, so that will be familiar for me.
Davis joined the Lady Raiders in the 2014-15 season as a junior. She has been named All-Region as well as All-State for her role in her two seasons with the Lady Raiders.
Davis has helped lead the Lady Raiders to back-to-back GISA region 3-IAAA titles in her two seasons with the team. “Last year, we were third in the state,” she said. “This year, we made it to the second round of the playoffs… I was an All-Star this year.”
Davis stated that she is looking forward to meeting new people and having new experiences in her upcoming college career. She also said that she would like to study pre-pharmacy while at GSW.
Asked how she spends her free time when not dominating the softball diamond, Davis said, “I mostly do schoolwork. I play travel ball on the weekends year-round, so that takes up a lot of my time.”
Davis finished her 2015 season as a Lady Raider with a .565 batting average. She hit one homerun during her senior year and brought in 29 RBIs. Davis struck out only once during the season in nearly 70 plate appearances.
After the ceremony, Lady Raider head Coach John Brady told the Times-Recorder, “Christina is the heart and soul of our team. She was the third hitter in our batting order and played great defense at first and third base. We are really proud of her and know that she will do well.”