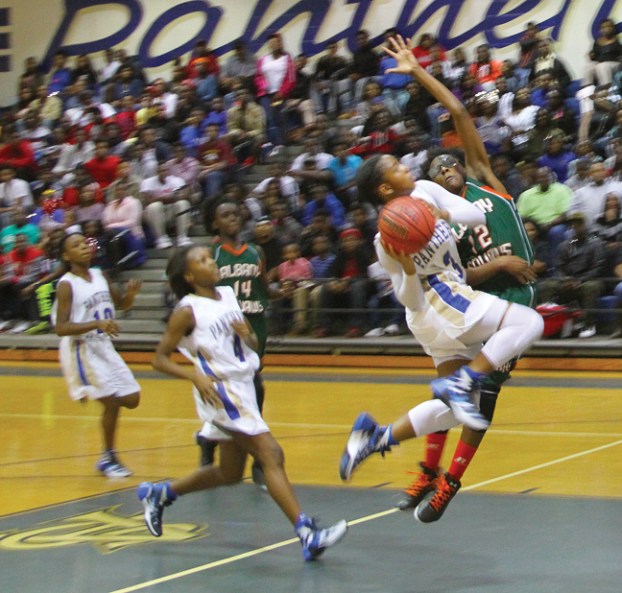 Michael Murray/Americus Times-Recorder: Jykiera Long leaps up to take a shot during the final quarter of the Lady Panthers’ home opener against Albany High School in Americus.

AMERICUS – All of the hard work and training is beginning to pay off for the Americus-Sumter Panthers and Lady Panthers. Both teams seem poised for another exciting season, as any spectator at Friday’s matches in Americus can confirm. For their first home games of the season, and the teams’ second region match-ups, ASHS fans filled up the Panther den on the school’s campus to cheer on the teams as they fought their way to a pair of huge wins over longtime rivals, Albany High School.
The Lady Panthers showed their vast array of talents as they kicked off the action by dealing a devastating defeat to Albany’s girls team. The Americus girls took down the Albany High Lady Indians by a whopping 84-9 margin in a match that can only be described as a complete blowout.
The Lady Panthers went on to grab another substantial 80-47 win the next evening over Southwest Atlanta Christian Academy (SWACA).
When the girls retired to the locker room after Friday’s test, the Panthers came out fighting, with the sting of last year’s 55-40 defeat at the hands of the Indians in the region tournament finals still fresh in their minds. Their determination and grit paid off this time around, as the ASHS boys took a 79-40 victory over Albany High.
The girls kicked off Friday’s action and the Lady Panthers began the weekend in style with Kayla Howard earning a double-double in the contest, leading the team’s shooters with 22 points ad 11 rebounds.
Atyanna Gaulden threw in 19 points to aid the team in the win. Gaulden also added eight assists and five steals to her already impressive stats.
Zari Mays reached double figures as well for the Lady Panthers, scoring 11 points and bringing down five rebounds. Ja’Kala Stephenson added another eight points and Shidajah Johnson contributed seven.
The girls’ Saturday match went just about as well as the night before for the Lady Panthers. In the team’s win over SWACA, Timia Swanson paced the team with an impressive double-double built from 30 points scored and 13 rebounds. Swanson also contributed five steals.
Gaulden hit a double-double as well, scoring 10 points, gaining 11 assists, and bringing down four rebounds. Jykiera Long followed close behind, with eight points and three steals. Howard, Mays, and Stevenson each added six points.
When the boys took the court on Nov. 20, the Panthers looked like they might be in for a very tough game, as the Indians had brought a very tall team to the Panther Den. Albany had five players on the court that measured over 6’4”, with two of them reaching 6’6”.
Though the Panthers were slightly outsized by their opponents, the team used their expert passing skills and spot-on shooting to push ahead for the win.
The Indians opened the scoring in the match, tossing in the first two-pointer shortly after the tip-off. Mere seconds later, ASHS guard, Daylon Leary dialed in from beyond the arch to put the Panthers up 3-2. Albany responded with another lay-up before Leary drained his second three-pointer, sparking a 9-0 run and giving the home team a lead that would continue to grow for the remainder of the contest. The Panthers held a 24-8 advantage over the Indians at the conclusion of the first quarter.
The visitors doubled their efforts in the second frame, scoring 16 points, but could not slow down the Americus boys’ quick passing and precise shooting. The Panthers took a 43-24 lead into the second half.
The Americus crew continued the offensive onslaught throughout the second half, with their strong defense shutting down Albany’s efforts at narrowing the gap. The Panthers held Albany to only 16 points in the final 16 minutes of play, while adding 36 points to their already substantial cushion.
Leary paced the Panthers’ shooters in the game, nailing all four of his attempted three-pointers and one free throw to lead the team with 13 points. Jerrell Jones and Fred Bryant followed close behind, with each player contributing nine points. Bryant tacked on three steals and two assists, while Jones grabbed three rebounds.
Scottie Sheffield tossed in eight points for the Panthers and brought down six rebounds. Eddie Brown contributed eight points as well.
Throughout the contest, the Panthers stayed accurate from the floor, connecting on 56.2 percent of their two-pointers. The team landed 64.3 percent of their shots from three-point range and shot 64 percent from the charity stripe.
The Panthers returned to action on Nov. 4, traveling to Acworth to take on the Alatoona Buccaneers. The results of this non-region match were not available at press time.
The Panthers and Lady Panthers will take the floor again on Dec. 4, in Cook County, battling the Cook County Hornets and Lady Hornets. 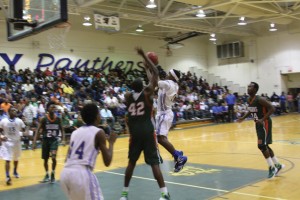 Michael Murray/Americus Times-Recorder:
James Baker takes a shot over an Albany opponent in the first half of the Panthers’ home opener.

Lady ‘Canes on fire with fourth win against undefeated Southeastern

Michael Murray/Americus Times-Recorder:Ja’Quasha Sesler follows a steal with a fast-break lay-up during the first half of the Lady ‘Canes’ Nov.... read more