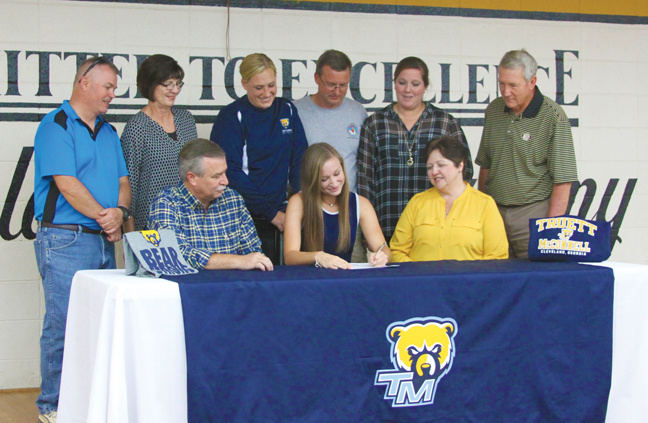 Michael Murray/Americus Times-Recorder: Burke, surrounded by her parents and softball coaches, signs her national letter of intent and scholarship agreement. Burke will be playing softball for the Truett-McConnell Lady Bears during the 2016-17 season.

AMERICUS – The Southland Academy Lady Raiders’ go-to pitcher for the 2015 season, Megan Burke, signed a scholarship agreement and national letter of intent with Truett-McConnell College on Nov. 20 in Americus. The ceremony, held on the Southland campus, saw dozens of Burke’s friends and fans come to show their support to the talented pitcher as she signed on with the Lady Bears for the 2016-17 season.
After the papers were inked, Burke gave a brief interview to the Times-Recorder, saying that she has been occupying the pitchers’ circle for six years as a Lady Raider. She went on to say that she ran track while in middle school as well, and intends on joining the Lady Raiders on the track again this season.
Burke has been playing travel ball since she was 14 years-old. “I’ve been playing all year round ever since then,” she said.
Asked how she decided to attend Truett-McConnell, Burke said, “They gave me the best offer… They just seemed to be the best fit for me. When I toured [the campus], that was definitely my choice.”
“I’m just glad that I get to continue playing softball,” Burke answered when asked what she is looking forward to in her upcoming college experience. “That’s what I love.”
“It’s also very pretty up there,” Burke added, referring to the college’s North Georgia campus.
Asked what course of study she would like to follow while in college, Burke said that she has not made any definite choices. “I know what I want to minor in,” she said. “I’m going to minor in psychology and business, but I don’t know what I’ll be majoring in yet.”
Aside from softball, Burke enjoys spending time with her friends at restaurants and watching movies.
Lady Raider head coach, John Brady, recently told the Times-Recorder that Burke pitched in every game of the 2015 season and amassed a 1.25 ERA. Since beginning her pitching career with the Lady Raiders, Burke has struck out 108 batters. “She has had a great career with us and has gotten better each year,” Brady said. “We’re very excited for her and we know that she will do very well at Truett-McConnell. She has very good control. She’ll do good things.”
After the signing, Truett-McConnell assistant softball coach, Colette Rollins, told the Times-Recorder, “We’re very excited about what Megan brings to the table. She’s a very strong left-handed pitcher that we feel is going to make a huge impact on our program. With her speed and her movement and the fact that she’s used to being the person in the circle that you rely on, we’re really excited that she will be joining us. [We hope to] be able to rely on her in pressure situations and for her to come in as a freshman and do a lot of work for us.”