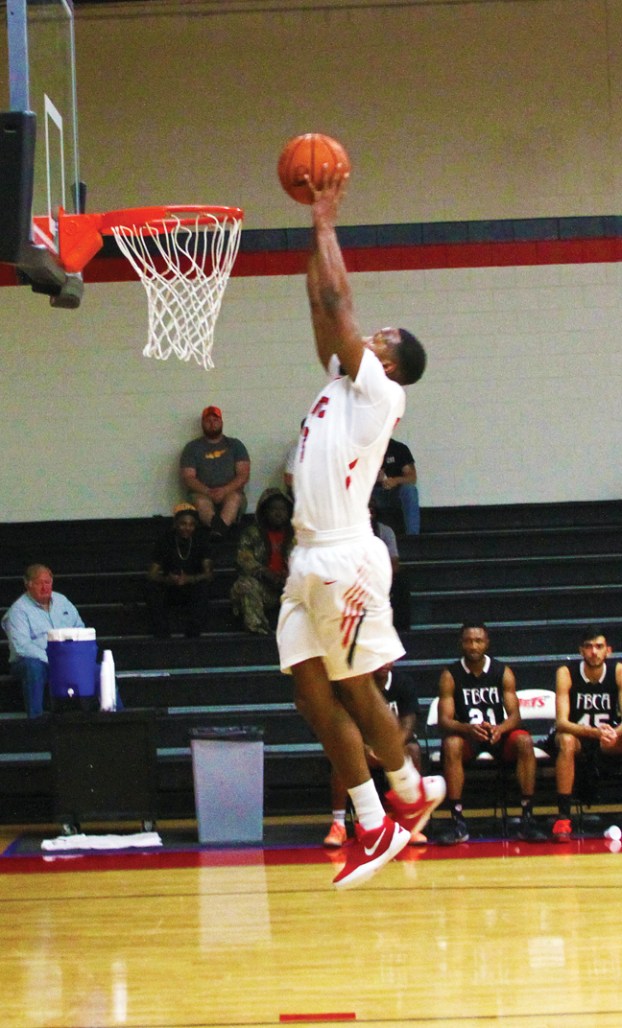 Michael Murray/Americus Times-Recorder: Jamal Norman (3) takes to the air for a dunk in a mid-November contest in Americus. Norman contributed 26 total points to the Jets’ pair of wins over Combine.

AMERICUS – The South Georgia Technical College (SGTC) Jets were able to overcome two tough losses to Chipola and Eastern Florida with back to back wins over Combine Academy from North Carolina and Atlanta recently to move to 6-3 on the season.
The Jets’ head coach, James Garrett, and his team lost an 85-77 decision to Chipola College in Tampa last week and then fell to Eastern Florida in a 77-62 match-up before getting back on the winning track with a 103-89 win over Combine Academy of North Carolina and a 92-55 win over Combine Academy of Atlanta on Nov. 23 night at the Hangar in Americus.
The Jets dominated Combine Academy from the opening whistle Monday night despite losing two key players to injuries over the past two weeks. Pat Welch, a freshman guard from Manchester, NH, went down with knee issues earlier this month and then Corbyn Jackson, a sophomore forward, injured the ligaments in his fingers in the match-up with Chipola.
Despite those injuries, the Jets rolled to the 92-55 victory over Combine of Georgia behind the scoring of sophomore Demario Beck, freshman Matt McMorris, and sophomores Jamal Norman, Clarence Smith, and Amir Warnock, who were all in double-figures.
Beck, the 6’8” forward from Cochran, led the Jets in scoring with 18 points and 10 rebounds. He was followed by McMorris, the 6’1” freshman guard from Buford. McMorris had 15 points, two rebounds and four assists.
Norman and Smith both chipped in 12 points each and then Warnock closed out the double-digit scoring with 10 points and nine rebounds.
The Jets had defeated Combine Academy of North Carolina 103-89 two days earlier in the South Georgia State Classic Tournament in Waycross. In that contest, Smith led the Jets in scoring with 22 points.  Norman and Torico Simmons, a freshman from Wilkerson, County, followed with 14 points each and then Jalen Mitchell, a freshman from Suwannee, added 13 points.
Prior to those two victories, the Jets had suffered a 77-62 loss to Eastern Florida State College in the first round of play in the South Georgia State Classic Tournament. The Jets were within three points of Eastern Florida at the end of the first half, but then Eastern Florida pulled away for the 15-point victory.
Warnock was the top scorer for the Jets in that game with 13 points. Norman and Beck each added 12 points.
In the 85-77 loss to Chipola College, the Jets were led in scoring by Beck with 17 points. Smith was the only other Jet in double-figures with 10 points.
The Jets took a few days off for the Thanksgiving break before traveling to Hanceville, AL to participate in the Hampton Inn Thanksgiving Bash on November 27-28. They faced Wallace State at 8 p.m.  on Friday and are scheduled to play Gadsden State at 2:00 p.m. on Saturday. The results of these matches were not available at press time.
The Jets and the Lady Jets open up their Georgia Athletic Association Conference (GAAC) play on Dec. 2 when they travel to Macon to take on Central Georgia Tech. The Lady Jets play at 5:30 followed by the men at 7:30 p.m. Then both teams host East Georgia State College in the Hangar on Dec. 5 at 1 p.m. and 3 p.m.