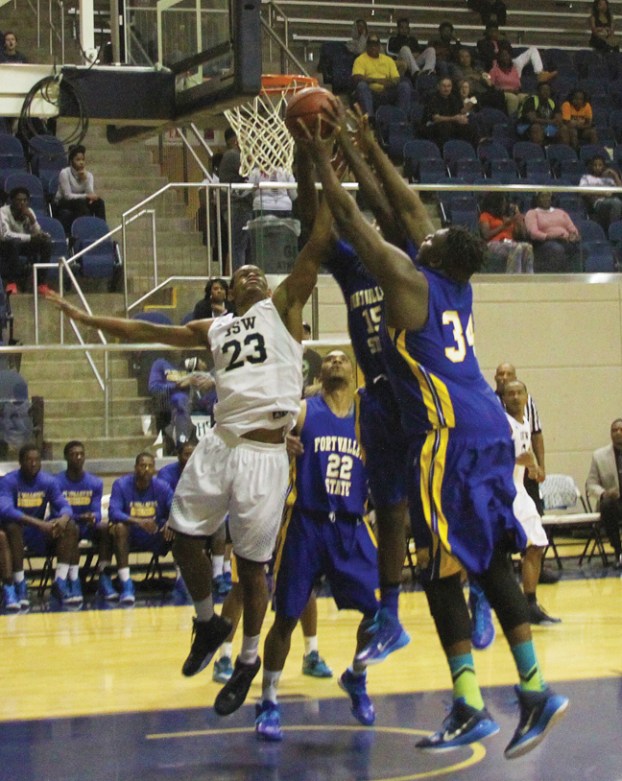 AMERICUS – Georgia Southwestern forward, Chandler Thomas, scored a game-high 28 points on the evening of Nov. 23 to lead the GSW men’s basketball team past Albany State, 83-75, in the Storm Dome.
With the win, GSW improved its record to 2-1 while handing Albany State (1-1) its first loss of the season.
Thomas, a graduate student from Indianapolis, Ind., was near perfect from the floor as he sank eight of nine shots in the contest. He made 12 of 15 attempts from the free throw line and added eight rebounds, two steals and a pair of blocks.
It was Albany State, however, that opened the evening with a quick puff of steam. A lay-up by Michael Green with 16:38 left in the first half gave the Golden Rams their largest lead of the night at 5-2.
GSW Freshman, Devin Watson, answered with a 3-pointer on the ensuing ‘Canes’ possession to even the score at 5-5.
The Hurricanes slowly built a cushion and led by eight points, 28-20, when Watson stuck again with 3-pointer at the 8:24 mark. GSW led at the half, 38-33.
Albany State scored six unanswered points to open the second half and regained the lead, 39-38.
The two sides stayed within a basket of each other over the following five minutes until a 14-2 GSW run capped by a Jure Gunjina jumper finally gave the Hurricanes a little breathing room and a 63-51 lead with 9:53 remaining.
Thomas sank a pair of free throws at the 6:06 mark and gave GSW its largest lead of the night, 70-55.
ASU rattled off eight straight points to cut the Hurricane advantage to seven points, but that’s as close as the Golden Rams would get the rest of the way.
GSW finished with a higher shooting percentage (46 percent) than ASU (42 percent), dominated the glass (47-33), dished out five more assists (16-11) and made 16 more free throws (30-14).
Gunjina came off the bench to add 15 points and a game-high nine rebounds. Watson sank 3 of 5 from beyond the arc to finish with nine points.
Earl Farnum scored 20 points and grabbed a team-best six rebounds to lead ASU. Dominique Pollard added 15 points off the bench and Khaliq Hughes chipped in 10.
Southwestern traveled to Melbourne, Fla., on Nov. 27 for a 4:30 p.m. matchup against North Greenville University in the semifinals of the Florida Tech Thanksgiving Tournament. The results of this match were not available as of press time.