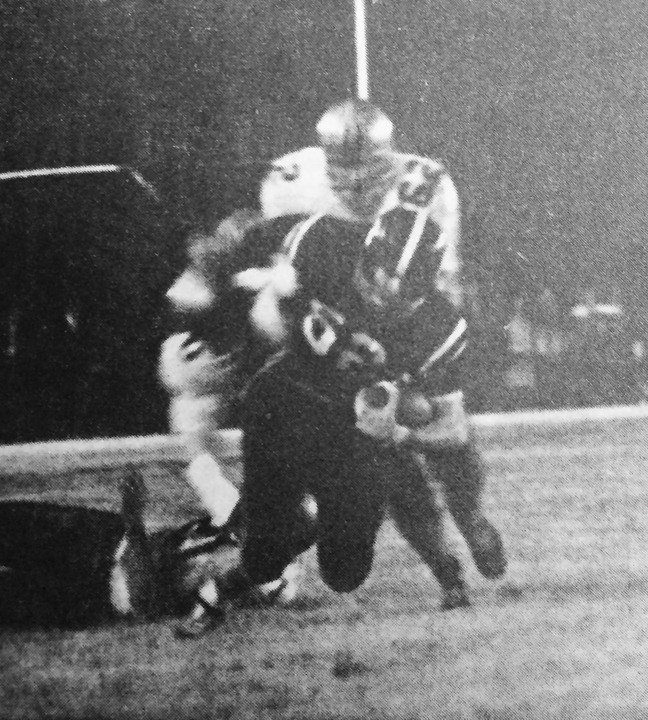 ATR File Photo: This photo, from the Nov. 27, 1965 edition of the Times-Recorder shows AHS’ Bob McKinnon taking off with the ball as a pair of Thomson defenders follow in hot pursuit. The original caption reads: “Bob McKinnon makes 8-yard gain for Americus Panthers. Run came in the fourth quarter of action-packed game here.” 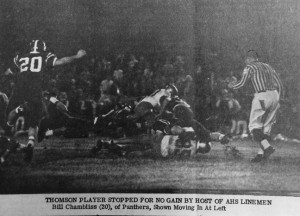 ATR File Photo:
This photo, from the Nov. 27, 1965 edition of the Times-Recorder shows a Thomson player getting tackled by several Panthers.The original caption reads: “Thomson player stopped for no gain by host of AHS linemen. Bill Chambliss (20), of Panthers, shown moving in at left.” 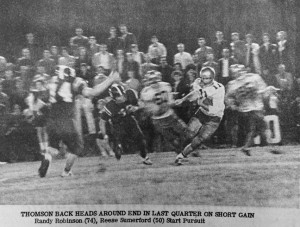 ATR File Photo:
This photo, from the Nov. 27, 1965 edition of the Times-Recorder shows a Thomson running back attempting to slip past the Panthers’ defensive line. The original caption reads: “Thomson back heads around end in last quarter on short gain. Randy Robinson (74), Reese Summerford (50) start pursuit.”

Editor’s Note: Here at the Americus Times-Recorder, we’re very proud of our area’s rich history of sporting excellence. One of the area’s most celebrated historical periods of athletic prowess was the Americus High School Panthers’ 1965 season, in which the team went undefeated, rolling over opponent after opponent on their way to a sweep of the state championship series.
While delving through our back issues and expansive archives, we have uncovered a wealth of photographs and articles written by former Times-Recorder sports editor, the late Clarence Graddick, during that era.
In our last installment of the series, we read all about the Panthers’ rematch against the Cook County Hornets for the Region 1-A championship. The Panthers won another solid victory in the contest and immediately set their sights on a much larger prize, the South Georgia title.
With their ticket punched to the South Georgia championship game, AHS began busily preparing for their next match-up against Region 2-A champions, the Thomson Bulldogs. By all accounts, the Bulldogs were an incredibly tough team with a hard-nosed offense and a defensive line that would often leave their opponents stunned.
In an article preceding the match, Graddick wrote “Thomson is one of the highest-scoring teams in the state if not the highest with more than 400 points scored over the season.”
On the Panthers’ preparedness for the match, Graddick wrote, “Coach Jimmy Hightower said he was pleased with the way the Americus boys had gone through drills this week… The big problem of the week was finding an offensive guard to replace Danny McGowan.” McGowan had sustained a knee injury in the previous week’s match and Hightower eventually decided to alternate three players to fill the void that his absence had left in the team.
In the Nov. 24, 1965 edition of the Times-Recorder, Graddick went into further detail on the upcoming contest in one of is signature “Sportingly Yours” columns titled, “Panthers Near Home Stretch”.
In the column, he discussed the fact that Thomson had never before won a South Georgia championship and, that the Panthers certainly did not want them to win their first in Americus. He discussed the upcoming battle between Commerce and Cochran for the North Georgia championship as well, hinting that he favored Carrolton for the win.
When the speculation about the other side of the state was concluded, Graddick got down to brass tacks. “This Thomson team should be an interesting one to watch since it has run rough-shod over all of its opponents this year…,” he wrote. You might hear fans remark that they haven’t played a very tough schedule. This might be so, but even if they were playing everybody’s B-Team, they would have to be good to score that many points.”
“We do feel, however, that the Bulldogs have not run into a defense as tough as that of Americus,” he continued. “In fact, a Thomson scout was heard to remark at the Americus-Cook County game last Friday, ‘They sure hit hard.’ …In fact I surely doubt that you could get two teams that hit harder on defense than the two that were on the field that night.”
Graddick went on to say that he believes that, despite the unknown capabilities of Thomson’s defense, the Panthers would likely be able to score because of the team’s balanced offense. He also said that, even though the visiting team was known for its high-scoring offense, he doubted that they had five backs that could compare to those of the Americus team.
————————————————-
The front page of the Nov. 27, 1965 edition of the Times-Recorder included an article on the “Marchers for Peace in Vietnam’s” protests in Washington, D. C. alongside another detailing U. S. Secretary of State, Dean Rusk’s frustration that attempted peace talks with Hanoi had been stalled.
These articles were dwarfed, however, by two pictures of the Panthers in action and a lengthy article titled, “Americus Defeats Thomson 20-14 for S. Georgia Crown” that detailed the action in the previous evening’s game.
A portion of this article is shared here: