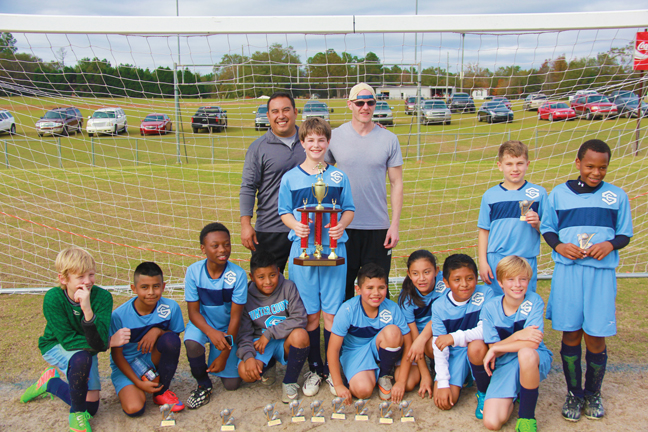 AMERICUS – The Sumter County Parks and Recreation Department’s (SCPRD) 12-and-under All-Star soccer team has been making waves this fall, winning the district championship in Americus and punching their ticket to the state championship in Dalton.
The team, composed of 10 and 11-year olds from Sumter County, has been dutifully practicing in preparation for the upcoming tournament.
The state tournament will begin at 7:30 on Dec. 4 in Dalton. The Sumter County boys will battle Walton County in the first round of competition. The tournament will include eight teams in three rounds of competition. If the Sumter County wins the first match, they will progress to the next round, scheduled to take place at 1:00 the next afternoon. The championship game is scheduled to be played at 4:00 on Dec. 5.
The district tournament was held at the Sumter County Recreation Complex on the weekend of Nov. 21-22.
SCPRD recreation manager, Jeff Fussell, recently spoke with the Times-Recorder about the department’s district-champion soccer team. “They won three games and came out in the championship game for a very, very good match with Grady County,” Fussell said. “That game could’ve gone either way, but we were fortunate enough to win 3-2.”
The Sumter County team also played Fitzgerald on Nov. 20 in the district tournament, defeating them 4-0 before taking down Thomasville YMCA 4-2 the next morning.
“Some of these same players went to the state tournament last year,” Fussell added. “Obviously, we lost a few of them that were there last year… Of course, we’ve replaced them with some other good players. Last year’s team went to the final-four.”
On the league’s regular season, Fussell said, “Our season went very well. We had four teams in our regular season and the All-Stars were selected from those four teams. We also had Schley County come in and play interleague soccer with us. Our 10-and-under All-Star team wound up runners-up at the district, so we almost had two teams going to the state tournament. They lost in the finals to Grady County 5-2.”
We’ve had a very successful season of soccer,” he concluded. “We started playing the Thursday after Labor Day and we wrapped up [the regular season] on Oct. 22. The All-Star team practiced for about three weeks before going to district. They played eight regular season games and they each had a playoff game. The two teams that won the playoff games got an extra game, so they all played between nine and ten games.”
On the team’s success,  assistant coach, Greg Fowler, said, “The U12 team is a very powerful team this year. Many of these players have played with each other in previous seasons, and many of them have a few years of state playoff experience. I think these factors are going to help us later on. Head Coach Juan Abarca, Coach Jonathon Abarca, and myself have spent countless hours training and watching these players, and after winning some tough matches in the district playoffs and overcoming big obstacles, we think this team is ready to compete at a high level.”