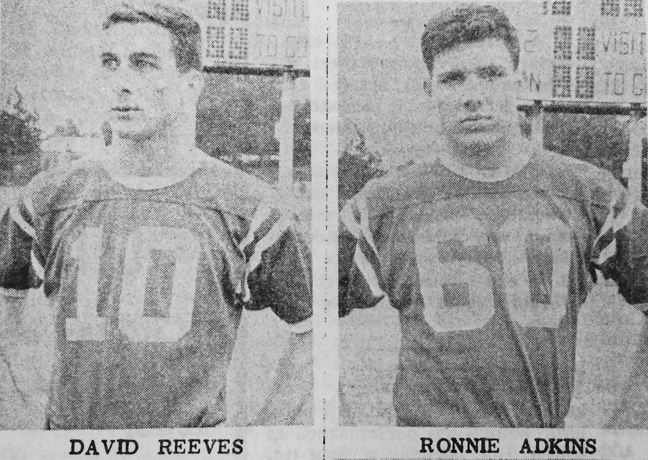 ATR File Photo: David Reeves and Ronnie Adkins, depicted in this photo from the Dec. 6, 1965 edition of the Times-Recorder, were named players of the year by the Atlanta Journal-Constitution following the Panthers’ victory in Commerce.

Editor’s Note: Here at the Americus Times-Recorder, we’re very proud of our area’s rich history of sporting excellence. One of the area’s most celebrated historical periods of athletic prowess was the Americus High School Panthers’ 1965 season, in which the team went undefeated, rolling over opponent after opponent on their way to a sweep of the state championship series.
While delving through our back issues and expansive archives, we have uncovered a wealth of photographs and articles written by former Times-Recorder sports editor, the late Clarence Graddick, during that era.
In our last installment of the series, we read all about the Panthers’ hard-fought victory over the Thomson Bulldogs, which culminated in the team leaving the field as the South Georgia champions.
With yet another win under their belts, the Panthers began their preparations for the upcoming state championship, to be played against the Commerce Tigers.
As the team prepared to take on the North Georgia champions, Graddick published a series of Times-Recorder articles detailing the team’s condition. According to Graddick’s writings, several of the Panthers’ key team members were plagued with injuries in the week leading up to the game. Danny McGowan had twisted his knee during the region championship and would join Pete Smith on the sidelines during practice, as Smith was suffering with a sprained ankle. Ronnie Adkins and Phil Saunders were also banged up during the South Georgia Championship, both suffering knee injuries. In the days leading up to the match, it was also unclear whether or not Harold Horne would be able to participate, as he was troubled with a shoulder injury.
Fortunately for the Panthers, each of these players, with the exception of McGowan, would be cleared to play by game time.
Graddick went on to discuss the Commerce crew’s potential to bring serious competition to the match, saying, “During the season, the Tigers gave up only five touchdowns to opponents in running up a record of 10 wins and no defeats. In the two playoff games, only six points have been scored on the team’s defense.”
He said that Commerce would be bringing 17 senior players to the match, including talented quarterback, Johnny Nix, and Commerce’s leading ground-gainer, Steve Gary. Gary, Graddick said, had racked up 843 rushing yards up to that point in the season and, would surely be looking to add more in the championship game.
All signs pointed to the upcoming game being quite a test for the Panthers.
When the big day arrived, the Panthers loaded up their gear and headed up to Commerce, determined to return home victorious.
The December 6, 1965 edition of the Times-Recorder’ sports page included an article on three of the Panthers’ team members, Gary Reeves, David Reeves, and Ronnie Adkins, who had just been named “Players of the Year” in their respective positions by the Atlanta Journal-Constitution.
The main focus of the sports page, however, was the previous Saturday’s action-packed game in Commerce. Graddick described the game in vivid detail in an article titled, “Panthers Win Class A Football Crown”. A portion of this article is shared below 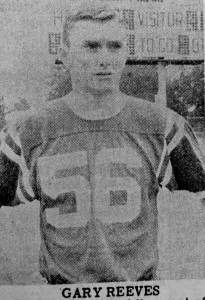 ATR File Photo:
This photo, from the Dec. 6, 1965 edition of the Times-Recorder depicts Gary Reeves, who had just been named a player of the year by the Atlanta Journal-Constitution.

Michael Murray/Americus Times-Recorder:
The 1965 Class A state championship trophy, won by the Panthers after their defeat of the Comerce Tigers, is currently on display on the campus of Americus-Sumter High School. Inscribed on the front of the trophy are the names of each member of the 1965 Panthers football team.