Jets slide to 8-4 after wins in Thanksgiving Bash, loss to CGTC 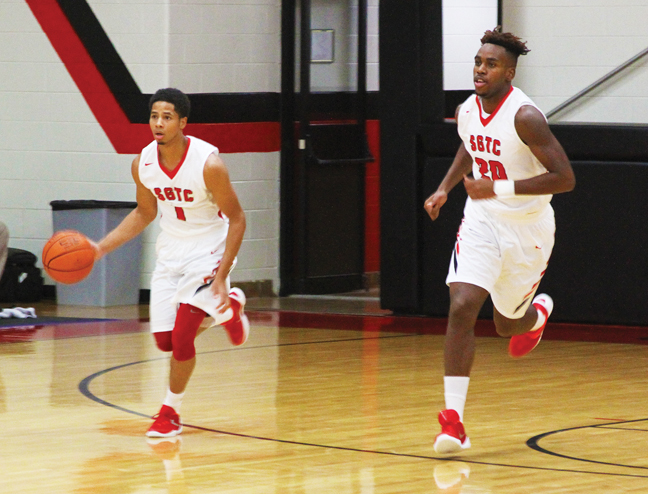 Michael Murray/Americus Times-Recorder: Point guard, Matt McMorris (left), and forward, Demario Beck (right), take off down the court in an early season contest in Americus. Beck and McMorris each scored double figures in the Jets’ win over Gadsden in the Hampton Inn Thanksgiving Bash.

After a pair of wins last week, coupled with one devastating last-second loss, the South Georgia Technical College (SGTC) Jets have improved their overall record to 8-4 on the 2015-16 season.
The Jets were able to snag two wins in the Hampton Inn Thanksgiving Bash in Hanceville, AL to begin the series before staging a comeback in the team’s Dec. 2 match against Central Georgia Technical College (CGTC), only to have it spoiled by a last-second three-pointer from the Jets’ opponents. CGCT took a 60-57 victory in the match.
At the Hampton Inn Thanksgiving Bash, the Jets came away with a 67-53 victory over Wallace State-Hanceville in the opening game of the tournament on Nov. 27. They then came back the next day to defeat Gadsden State Community College 74-67.
Three Jets wound up in double-figures in the 67-53 victory over  Wallace State.  Clarence Smith led the team with 15 points in that win. He also had four assists, four steals and two rebounds. Demario Beck was next in line with 13 points and 12 rebounds. Corbyn Jackson came off the bench to toss in 11 points to round out the double-digit scoring.
The Jets were up 32-29 at the end of the first half and then took control in the second half to outscore Wallace State 35-24 and walk away with the 14-point victory.
In the second game of the Thanksgiving Bash, the Jets continued their winning ways with their fourth consecutive victory. Beck led the Jets to that 74-67 win over Gadsden with a total of 22 points. He also had 15 rebounds, three assists, two steals and three blocked shots.
Freshman, Matt McMorris, tossed in 12 points and then Jamal Norman, a sophomore guard, added 10 points to close out the double-digit scoring for the Jets. Smith and Amir Warnock added seven points each.
The Jets were up 30-23 at the end of the first half. Gadsden State matched the Jets point-for-point in the second half with 44 each and that allowed the Jets to secure the 74-67 win.
The Jets saw their luck wear thin when they opened up their Georgia Athletic Association Conference (GAAC) play on Dec. 2, facing CGTC in Macon.
SGTC struggled in the first half before rallying in the final frame to take the Titans to the wire. The Jets battled their way back from a 14-point deficit to tie the score 57-57 with 31 seconds remaining on the clock, The Titans hit a three-pointer with 1.7 seconds remaining to grab the narrow 60-57 win.
“We did not give up. We had a chance to win at the end and I think that the more we play together as a team, the better we will be. I can see some improvement but we still have a ways to go,” said the Jets’ head coach, Travis Garrett, who is in his first year as head coach and had to rebuild the program from scratch.
Torico Simmons led the Jets in scoring with 18 points including back to back shots in the final seconds to help the team tie the game in the eleventh hour. He sank five of nine from the field, two of four from the three-point arc and six of six on the free throw line.
Jackson added 15 points for the Jets to close out the double-digit scoring. He also had five rebounds.
The Jets are now 8-4 overall and tied for last place in the GCAA with a 0-1 record in the conference.
The Jets return to action on Dec. 5, facing East Georgia State in Americus.