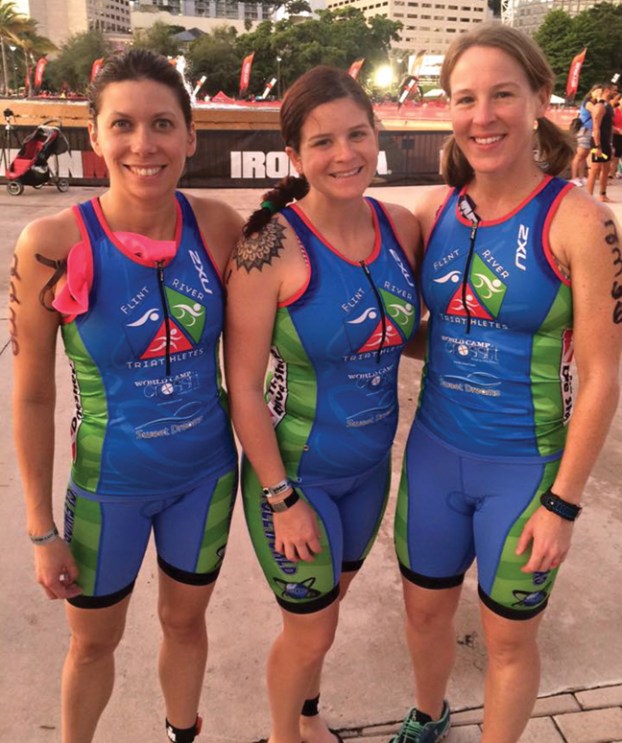 Submitted Photo: Champion, at right, is pictured with two fellow members of Flint River Athletes, Madye Carter (left) and Beth Crain (center), prior to the start of Ironman 70.3 Miami.

AMERICUS – Anna Champion, assistant director of Campus Recreation and director of Fitness and Wellness at Georgia Southwestern State University, recently completed Ironman 70.3 Miami on Oct. 25.
Ironman 70.3, also known as a Half Ironman, is a triathlon race consisting of a 1.2-mile swim, a 56-mile bike ride and a 13.1-mile run, totaling 70.3 miles. The mileage for each segment of the Ironman 70.3 is equal to half the mileage of the corresponding segment in a full Ironman.
Champion completed the swim in just over 35 minutes, the bike ride in roughly two hours 49 minutes, and the run in about two hours 28 minutes. She completed the entire triathlon in just over 6 hours.
Ironman 70.3 Miami was Champion’s third Half Ironman. Though she previously completed Ironman 70.3 Augusta in 2013 and 2014, Champion said this is the toughest Half Ironman, both physically and mentally, that she has ever experienced.
“Miami was very different than anything I have ever endured. I was stung by jellyfish during the swim, witnessed three bike crashes while I was on the bike course and tackled a bridge four times for a 6-mile loop we did twice,” she said. “I would say it was an emotionally challenging race. I overcame many mental obstacles during the entire time I was out on the course. When I reached the finish line, I sobbed when I found my husband. I was emotional about the difficulty of the race, and I was so thankful to be done safely.”
In preparation for the Ironman, Champion went through extensive training. She swims, bikes and runs three days a week and does strength training twice a week. She also attends Power Yoga, one of GSW’s weekly group exercise courses.
Champion was supported and helped along the way by her husband and friends in Americus and the Leesburg/Albany area, who train along with her, and by Tim DeMott, coach of the local swim team Americus Blue Tide.
Champion participated in Ironman 70.3 Miami along with two other members of Flint River Triathletes in Albany. The three were the only members of the group to participate in the Miami event.
Champion sees a full Ironman in her future after completing a few more goals. She plans to train for and race a full marathon as well as ride a 100-mile century bike ride.

From STAFF REPORTS AMERICUS – With a rally in the fourth quarter on Dec. 1, the Georgia Southwestern women’s basketball... read more