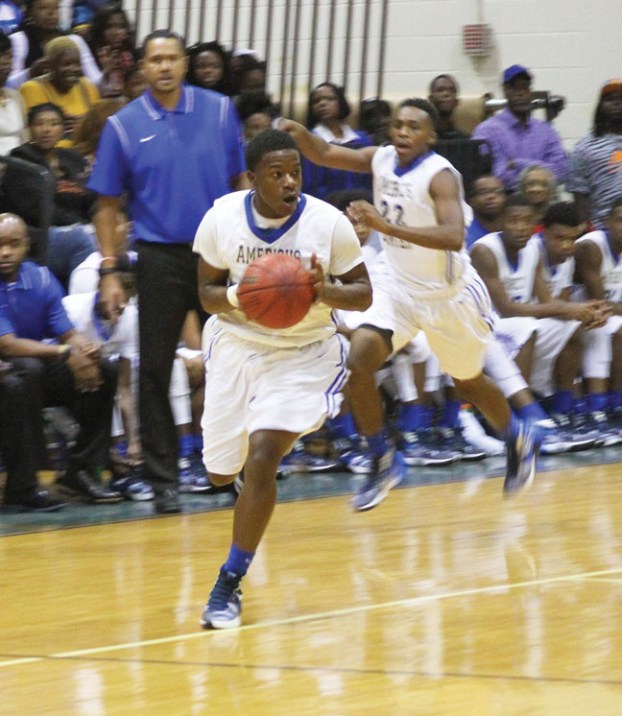 Michael Murray/Americus Times-Recorder: ASHS’ Stephon Luster takes off down the court in an early-season cotest in Americus against Albany High. Running behind Luster, at right, is Dorion Bateman. At left, Panther head coach, Michael Hoffpauir, watches the action intently.

The Americus-Sumter Panthers and Lady Panthers continued their strong season play last weekend, facing non-region foes, Cook County and Macon County on Dec. 4 and 5, respectively.
The Lady Panthers kicked off the action on Friday in Cook County, dominating the court in the match against the Lady Hornets to return home with an  impressive 83-37 win. The Lady Panthers traveled to Montezuma the next afternoon to take down the Lady Bulldogs in a similar fashion, 77-49.
The Panthers began the weekend strong, defeating Cook County 63-33 in the Friday nightcap. The ASHS boys met their match, however, the next day as the Macon County Bulldogs fought their way to a 59-53 defeat of the visiting Panthers.
With the pair of wins, the Lady Panthers expand their undefeated streak to five games on the 2015-16 season. The ASHS girls have played three region matches as of press time and hosted the Dougherty County Lady Trojans in the Panther Den in Americus on Dec. 8. The results of this contest were not available at press time.
With one win and one loss over the weekend, the Panthers slide to 3-2 overall on the 2015-16 season thus far and have won both of their Region 1-AAAA tests. The Panthers hosted region foes, Dougherty County, on Dec. 8. The results of this contest were not available at press time.
In the Lady Panthers’ second match of the weekend in Macon County, senior point guard Atyanna Gaulden, put her skills on full display as she led the team with a whopping 31 points in the 77-49 victory. In addition to her impressive shooting, Gaulden contributed eight rebounds, 10 assists, and five steals to the win.
Fellow senior, Myia Crawford, joined Gaulden in the double-digit scoring club with 18 points. Crawford added eight rebounds and three steals to the team’s significant stats in the contest.
Jakala Stevenson added seven points and seven steals to the team’s total while Zari Mays brought down seven rebounds for the Lady Panthers.
The Lady Panthers held a 42-24 lead at the half and continued to expand their advantage over the final two quarters to take the win. The ASHS girls hit just under 50 percent of their attempted field goals in this contest.
In ASHS’ weekend opener against Cook County in Adel, the visiting Panthers came out fighting and grabbed an early 20-8 lead after the first quarter. The Panthers tacked on another 21 points in the second frame, while holding the Hornets to only 12 to take a 41-20 advantage into half time. ASHS continued the shooting streak in the third quarter, outscoring the Hornets 18-4. Cook attempted to stage their comeback over the final eight minutes, tossing in nine points to the Panthers’ four, but couldn’t overcome the gap and suffered a 63-33 loss on their home court
Fred Bryant paced the Panthers as the only player score double figures, with 14 points, two assists, and two steals. 12 of Bryant’s points were tossed in from beyond the arc.
Scottie Sheffield and Kiante Sims each tossed in nine points, with Sims adding four rebounds and two assists. Sheffield brought down three rebounds. Eric Hall contributed seven points and Aiden Sanford added another six. In total, ten Panthers managed to contribute points to the win.
From the field, the Panthers connected on 48 percent of their shots.  The ASHS boys also honed in on 41.7 percent of their attempts from the three-point line and 70.6 percent from the charity stripe.
Both the Panthers and Lady Panthers travel to Albany on Dec. 11 to take on region opponents, the Monroe Tornadoes and Lady Tornadoes. The ASHS teams will return to Americus on Dec. 12 to battle Westover in another region test.

Michael Murray/Americus Times-Recorder:Jamarcus Scott takes a shot from the lane during the Wildcats’ Dec. 4 match in Ellaville. By MICHAEL MURRAY... read more