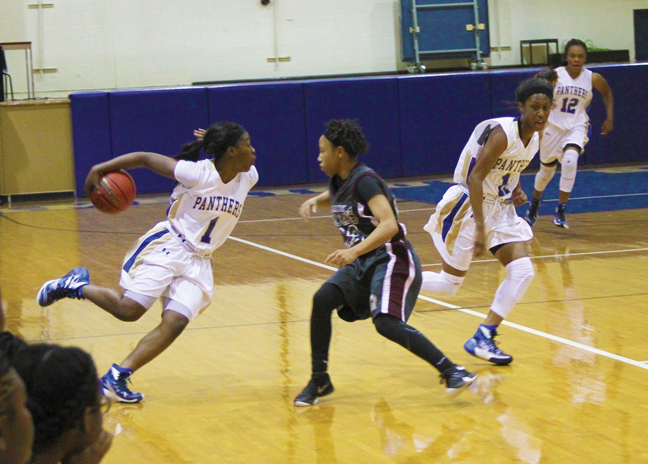 Michael Murray/Americus Times-Recorder: Atyanna Gaulden executes an evasive maneuver to push past a Dougherty defender after stealing the ball during the first half of the Lady Panthers’ Dec. 8 contest in Americus. Gaulden helped propel the Lady Panthers to victory with 18 points in the match.

AMERICUS – The Americus-Sumter High School Lady Panthers continued their exciting winning streak on Dec. 8 in Americus, dealing an 80-29 defeat to the visiting Dougherty County Lady Trojans. The win marks the ASHS girls’ sixth overall victory and the team’s fourth region 1-AAAA win of the 2015-16 season.
So far, during the 2015-16 season, the Lady Panthers have not had any opponent come within 25 points of their final score.
The Dougherty girls came out fighting in the match, taking first possession and grabbing an early lead. The Lady Panthers quickly equalized the score before the Lady Trojans added another lay-up.
Soon, however, ASHS’ Atyanna Gaulden saw her opportunity to make a steal and, with a little creative footwork, pushed past her defender and tossed the ball to Amber Hicks, waiting under the basket. Hicks deftly put the ball up to even the score 5-5.
Less than a minute later Dougherty added another two before Gaulden tossed Hicks another assist to tie the game 7-7.
Gaulden then made a fast break lay-up to put the Lady Panthers ahead for the first time in the contest, 9-7.
The teams continued to battle, with Timia Swanson adding another lay-up and Ariel West assisting Myia Crawford in another two-pointer as the Lady Panthers grabbed a 15-14 lead with seconds remaining in the initial frame. A Dougherty shooter sank a perimeter shot at the buzzer to put the Lady Trojans up 16-15 going into the second stanza.
Gaulden opened the second quarter with another steal and an assist to Jykiera Long, who laid the ball up and sparked an 11-0 run for the Lady Panthers. A’braylor Mercer and Hicks each added a pair of free throws, while Gaulden contributed a fast break lay-up. Swanson capped off the run with one from the free throw line to put ASHS ahead 26-16 before the Lady Trojans broke their silence halfway through the second quarter.
The Lady Panthers continued to expand their lead through the remainder of the game as the Americus shooters heated up and the team’s powerful defense shut down their visiting opponents.
The ASHS girls took a 34-20 lead into half-time and outscored the Lady Trojans  46-9 in the second half of the competition to take the significant 80-29 region win.
Swanson led the Lady Panthers’ shooters in the contest with 21 points, followed closely by Gaulden, who contributed 18. Senior, Kayla Howard, joined these two 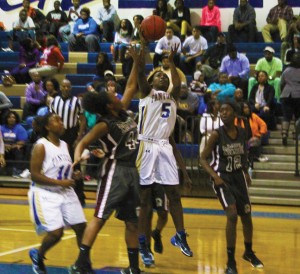 Michael Murray/Americus Times-Recorder:
Timia Swanson takes a shot over a Dougherty defender during the Lady Panthers’ Dec. 8 contest in Americus. Swanson paced the ASHS girls in the victory with 21 points.

in double digits with 14 points as did Hicks, who scored 11. Long brought up the rear for the Lady Panthers’ top shooters with eight points while Mercer contributed four.
The Lady Panthers shot an impressive 57 percent from the floor and connected on 74 percent of their free throws.
Swanson and Gaulden each posted double doubles in the contest, with Swanson bringing down 12 rebounds and Gaulden dishing out 10 assists and six steals.
The Lady Panthers traveled to Albany on Dec. 11 to face the Monroe Lady Tornadoes. The results of this contest were not available at press time. The ASHS girls will return to action in the Panther Den in Americus on Dec. 12, as they defend their undefeated record against the Westover Lady Patriots.