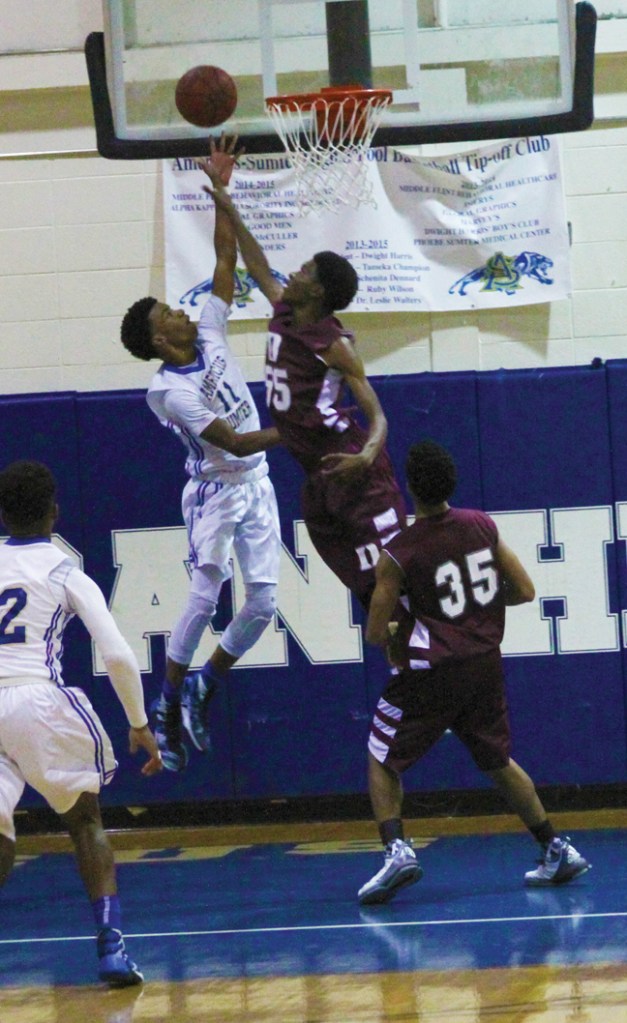 Michael Murray/Americus Times-Recorder: ASHS’ Eric Hall (11) shoots past a Dougherty player during the Panthers’ Dec. 8 contest at the Panther den in Americus. 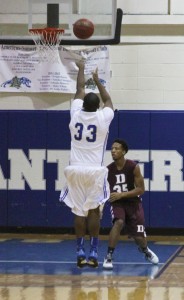 AMERICUS – The Americus-Sumter Panthers returned to action this week on Dec. 8, hosting region 1-AAAA foes, the Dougherty County Trojans in Americus.
After a hard-fought but, unfortunately for Panther fans, uphill battle, the Panthers were bested by the Trojans 69-53 in the home contest.
With the loss, the Panthers drop to 3-3 overall and 2-1 in region 1-AAAA.
The Trojans came out fiercely in the contest and, though the Panthers received first possession, opened the scoring 40 seconds into the action. Dougherty continued to rack up points against the Panthers over the next two minutes before Panther head coach, Michael Hoffpauir, decided to make some adjustments to the line-up to better counter the Trojans’ aggressive style of play.
With Eric Hall, Eric Brown, Ben Walters, Stephon Luster, and Aiden Sanford now on the court, the Panthers began making moves. Halfway through the initial quarter, Hall put the Panthers on the board with a lay-up moments before Brown executed a steal and made a fast break for another two-pointer, sparking a 12-4 scoring run that would last the remainder of the first frame.
Near the 1:30 mark, the Panthers struck again when Walters grabbed a rebound and put it back up. Dorion Bateman came off the bench to add a jump shot from the perimeter and Sanford tossed in a lay-up with 30 seconds left on the clock. With the Panthers down by eight and five seconds left in the frame, Kiante Sims threw up a buzzer-beater to bring the Panthers within six at 18-12.
The Americus boys opened the second frame with Hall adding a Sims-assisted lay-up and continued this streak through the beginning of the stanza. At the 5:45 mark, Sanford grabbed a rebound and put it back up to put the Panthers ahead 20-19 and give the home team their first lead of the game.
The opposing teams traded the lead three times over the next two minutes before Dougherty finally pulled ahead for good. The Trojans continued to pad their lead for the next minute before the Panthers began clawing their way back out of the hole. Over the last minute before the half, Sims executed an exciting dunk and Daylon Leary assisted Sanford in a lay-up to put the Panthers back within three. ASHS took a 30-27 deficit into the locker room at half-time.
The Trojans continued their onslaught when the action resumed, however, and would not give the Panthers any opportunity to stage a comeback, taking a 49-38 lead into the final frame.
The ASHS boys came within five points twice during the latter portion of the second half, but were unable to pull any closer. At the game’s conclusion, the Trojans returned to Albany with the 69-56 win.
Sanford was the only Panther to score double figures in the match, with 16 points. Sims and Hall followed with six points each.
The Panthers traveled to Albany on Dec. 11 to take on region 1-AAAA opponents, the Monroe County Tornadoes. The results of this match were not available at press time.
The ASHS boys will return to the Panther den in Americus on Dec. 12 to battle another region challenger, the Westover Patriots.