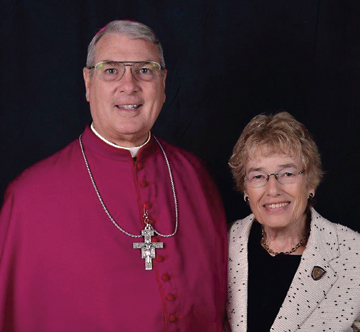 SAVANNAH — Seventy-eight residents in South Georgia are recipients of a 2015 Bishop Gartland Award for outstanding service to the Catholic Church in the Diocese of Savannah.
Bishop Gregory J. Hartmayer, OFM Conv. conferred the Bishop Gartland Service Awards on Sunday, Nov. 22 at the Cathedral of St. John the Baptist in Savannah on the Feast of Christ the King.
The award recipient from the Albany Deanery is Charlene Hanson, Ed.D., a member of St. Mary Catholic Church, Americus.
Hansen was nominated  by  Father Fran Gillespie, SJ  Pastor. IN his nominating letter, he had the following to say of Hansen.
“Mrs. Charlene ‘Chuckie’ Hanson exemplifies Pope Francis’ directive to go to the margins. After retiring as a well published professor at Georgia Southern University, where she was founding Director of its Nursing Practitioner Program, Mrs. Hanson has been working at Bread of Life Soup Kitchen and Health Clinic in Montezuma, a small rural community in southeast Georgia. The soup kitchen serves meals and spiritual offerings to 40 to 70 persons twice a week and at holiday time. Drawing on her expertise as a Registered Nurse, Mrs. Hanson has served for the past eight years as a volunteer family nurse  providing health care to patients who have no insurance — poor  African Americans, Vietnamese, Hispanics and Anglos. As a hands-on nurse practitioner who also holds a doctorate from the University of Georgia, she is able to diagnose, monitor and treat the primary care and stable chronic illnesses of these poor where doctors are de facto inaccessible to them. She also takes part in interfaith spiritual programs offered within that community. She currently serves as Chairlady of St. Mary’s Parish Council, and over the past ten years served as Lector, Communion Minister to the Sick and Homebound, and Extraordinary Eucharistic minister.
“Charlene Hansen, or as she prefers to be called, Chuckie, is an exemplary parishioner. In her going to the margins – beyond our parish to Montezuma,  she demonstrably practices several of the works of mercy Pope Francis has in mind for the impending Year of Mercy. Her unassuming, selfless, longstanding medical care of the poor in Montezuma is a credit to her faith and to her Catholic Church. Though her health now is diminishing fast, she continues to extend herself laboriously and caringly for the poor. Thus,  I enthusiastically recommend her as St. Mary’s Gartland Award designate. “
Named for Francis X. Gartland, the first Bishop of Savannah, the award is given for distinguished service to the Catholic Church in South Georgia. The award was instituted in 2000 to coincide with the 150th anniversary of the Diocese of Savannah.
Bishop Gartland, born in 1805 in Dublin, Ireland, was named Bishop of the newly erected Diocese of Savannah in July 1850. A true missionary bishop, he traveled the expanse of the diocese, which at that time included all of Georgia and part of northern Florida.
When a yellow fever epidemic struck the city of Savannah, he visited the sick tirelessly, administering the sacraments, until he, himself, contracted the fever and died in 1854.
The Bishop Gartland Service Award is an honor bestowed by the Diocese of Savannah on persons who have given distinguished service to the Church in the tradition of its first bishop.
The gold and blue award pin combines elements of Bishop Gartland’s episcopal coat of arms with elements from the shield of the Diocese of Savannah. His motto, Vincit Veritas,” or “Truth conquers,” is inscribed on the pin.
The Catholic Diocese of Savannah includes 79 parishes and missions in 90 counties of South Georgia.