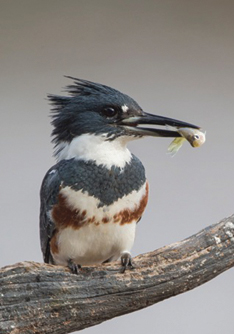 A Belted Kingfisher that Hardy captured with his camera just after it had snagged a bite from Lake Jennifer.

Even as a child walking home from school I knew the rattling sound of the Belted Kingfisher. Its loud call announced the bird’s presence long before he flew into view. As he patrolled up and down the creek he would suddenly stop on a snag that often overhung the water where he would look for small fish and crayfish lurking just below the surface. Once the kingfisher locked onto his next meal he would launch himself from his perch with a straight-as-a-string flight and dive, head first, into the water. With an enormous dagger-like beak, the tiny fish would be held like pincers. The bird would then fly back to a perch to enjoy his meal.
One of our most widely distributed birds, Belted Kingfishers are found throughout North and Central America. Always associated with water, the kingfishers make a living as their name implies — they “fish” for their meals. Watch for them perched on utility wires and poles, on bridges and trees anywhere near fresh or salt water. At times the Belted Kingfisher will hover up to 40 feet over the water like a kestrel or a helicopter before making his dive.
The bird’s food source has caused it to be persecuted (shot) by man and viewed as a significant predator of fish, especially at fish farms. According to Birds of North America, online, over 400 birds were shot or trapped at a private fish farm near Lake Michigan during one spring migration. Fortunately, migratory bird laws have since been enacted thus affording the birds some protection. There still may be some illegal shooting of birds at some fish hatcheries.
For these reasons Belted Kingfishers will not allow close approach by man. They are a naturally skittish species and I don’t blame them. The birds coloration appears a slate blue above and mostly white below. Oddly enough in this species, the female bird is the most colorful with a rusty red band around her lower belly. Their size is somewhere between a Blue Jay and a crow in size.
Because I live on a neighborhood lake I see and hear Belted Kingfishers almost anytime I am outside. As a bird photographer I longed for a nature photographer’s dream trifecta. I wanted a three-pronged miracle photograph: first was a kingfisher at very close range (25 feet or less); secondly I wanted to photograph the female for the added color she has; and thirdly, I wanted the bird to have a fish in it’s beak. I wasn’t asking much, was I?
After years of observing patterns of behavior and photographing them I finally got my wish. On Saturday, Nov.  21, 2015, a female landed on my perch with a small fry clutched tightly in her beak. She proceeded to beat the tiny fish against the tree limb perch to subdue the fish before she swallowed it head first. As I watched the sequence of events unfold through the camera’s viewfinder I knew this was special because all three of my requirements were met in this one moment. Perhaps I should have purchased a lottery ticket afterwards because I felt like  the luckiest man in Americus, or at least at Lake Jennifer!

Keith Wishum: At home in the funeral home

Jesus of Nazareth was accused of many things — blasphemy, treason, and fraud to name a few of the minor... read more