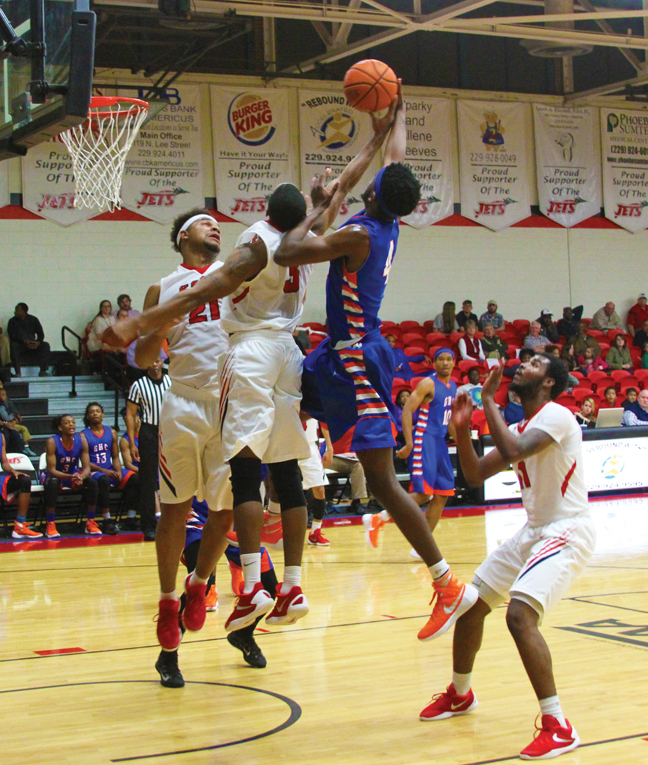 Michael Murray/Americus Times-Recorder: Corbyn Jackson (21) and Jamal Norman (3) battle for the rebound against a Georgia Highlands defender during the Jets’ Dec. 10 contest in Americus. 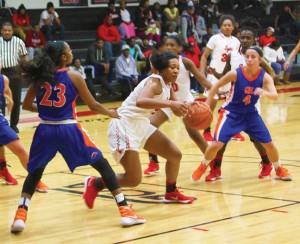 Michael Murray/Americus Times-Recorder:
Mikaela Jones (23) makes her way through a host of Georgia Highlands defenders on her way to the basket during the Lady Jets’ Dec. 10 contest in Americus. 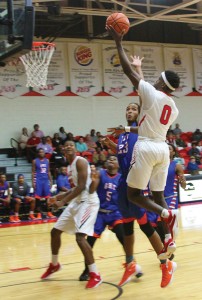 Michael Murray/Americus Times-Recorder:
Shaq Athie (0), is shown above tossing in a jump shot from the lane during the Jets’ Dec. 10 contest at the Hangar in Americus.Athie was the leading scorer for the Jets in the match, with 16 points.

“A very big conference win,” was the way South Georgia Technical College (SGTC) Athletic Director and Lady Jets head coach James Frey described the Lady Jets’ 60-52 victory over the Georgia Highlands Lady Chargers and former SGTC Lady Jets head coach, Brandon Harrell, on Dec. 10 at the SGTC campus in Americus.
The Lady Jets continued the excitement on Dec. 12, taking down the Andrew College Lady Tigers 54-37 in a Cuthbert road match.
The Lady Jets’ exciting Dec. 10 come-from-behind win was almost duplicated by the Jets and head coach, Travis Garrett, that same evening. The Jets overcame a 26-point deficit to pull ahead of the Chargers 68–67 in the final five minutes of the contest. The National Junior College Athletic Association (NJCAA) number-four nationally ranked Chargers came back and captured the 84-79 win, however, in the final seconds of the game.
The Jets made up for the loss on Dec. 12, however, traveling to Barnesville to take down the Gordon Fighting Scots 76-71 in an overtime nail-biter.
The pair of wins by the Lady Jets leaves the team in second place in the Georgia Collegiate Athletic Association (GCAA) with an overall record of 9-3 and a conference record of 4-1.
The Jets’ 10-5 overall record and 2-2 conference record leaves them currently in fourth place in the GCAA.
On the Lady Jets’ Dec. 10 comeback victory, Frey stated, “I thought our team played with a lot of emotion in the second half and kept their composure when we got down by 10 points. They really fought hard to get back in it and this was a true team win. This allows us to stay in the race and hopefully get on a roll and build some momentum going into Christmas break. We have said all along the sky is the limit for this team and we are just starting to show glimpses of how good we could be.”
Sophomore guard, Cierra Bond, was the top scorer for the Lady Jets with 20 points. Bond hit six of eight three pointers, three in the first half and three in the second half. She was followed by sophomore forward, Angela Tompkins, with 16 points, freshman guard, Le’Deja James, with 11 points and sophomore forward, Molly Brown, with 10 points.  Sophomore point guard, Brittney Delva, had only one point but her ball handling and five assists were key to the victory as well.
In the Dec. 12 contest against Andrew College, the Lady Jets managed to pull ahead 21–13 at the half, but Andrew battled back in the third quarter to close the gap to 31–28. The Lady Jets finally came alive in the fourth quarter and outscored Andrew 23 – 9 to capture the 54–37 win.
The pace was set for the Lady Jets by Bond, who threw in 15 points, followed by Brown, who contributed 12. Brown also led the team’s rebounders alongside teammate, Kendra Green. Both players grabbed seven as they helped to propel the team to victory.
On the Jets’ Dec. 10 comeback attempt that was callously thwarted by the visiting Georgia Highlands Chargers, Coach Garrett said, “We got off to a rocky start. We had six straight turnovers at the beginning of the game and then Georgia Highlands made 10 threes in the first half. However, we were able to get back into the game because we starting taking care of the ball and played better defense which allowed us to get back in the game and actually take the lead.”
The Jets held Georgia Highlands scoreless for over five minutes in the second half to stage a comeback, but a few turnovers late in the game allowed the Chargers to capture their 13th consecutive win.
“If we play with the energy [that we had] in the second half all of the time, then we will get the results we can all be happy about. Until then, we are back to work…  It is a long race to the finish line and we will be there in the end,” added Garrett.
The Jets were led in this match by freshman guard, Shaq Athie, who had 16 points and four assists. Freshman guard, Rico Simmons, added 14 points while Clarence Smith tossed in 12 and Jamal Norman had 11 to close out the double-digit scoring for the Jets. Amir Warnock added seven points and had 10 rebounds. Jalen Mitchell also tossed in seven points.
Two days later, the Jets licked their wounds and returned to the court in Barnesville to grab an overtime win over Gordon College.
“This may have been a turning point for our team,” said Garrett. “The second half against Georgia Highlands and then in the overtime period, we came to play basketball and it showed.”
The Jets were down 32–33 at the end of the first half and then battled back to tie the game 61–61 at the end of regulation play. The SGTC men outscored Gordon 1  10 in overtime to take the 76–71 win.
Corbyn Jackson sprung into action during this match to tie Simmons for highest score, with each player contributing 18 points. Smith joined his teammates in double figures with 12 points in the road match. Demario Beck followed close behind with nine points and Warnock added another seven to the team’s total.
Jackson led the team on the boards, bringing down 11 rebounds in the contest while Beck contributed nine. Norman and Warnock each added seven.
Simmons dished out six assists, while Norman and Smith each dished out four.
With three consecutive wins under their belts, the Lady Jets will look to keep the streak alive on Dec. 17 as they travel to Mariana, FL. to take on Snead State Commnity College in a Chipola College tournament. The SGTC ladies will return to the court in Americus on Dec. 28 for their annual Christmas Classic tournament.
The Jets will battle Chipola College in Americus on Dec. 17. The team will then hit the road for Panama City, FL. to take on Northwest Florida State College in the Gulf Coast Classic on Dec. 29.