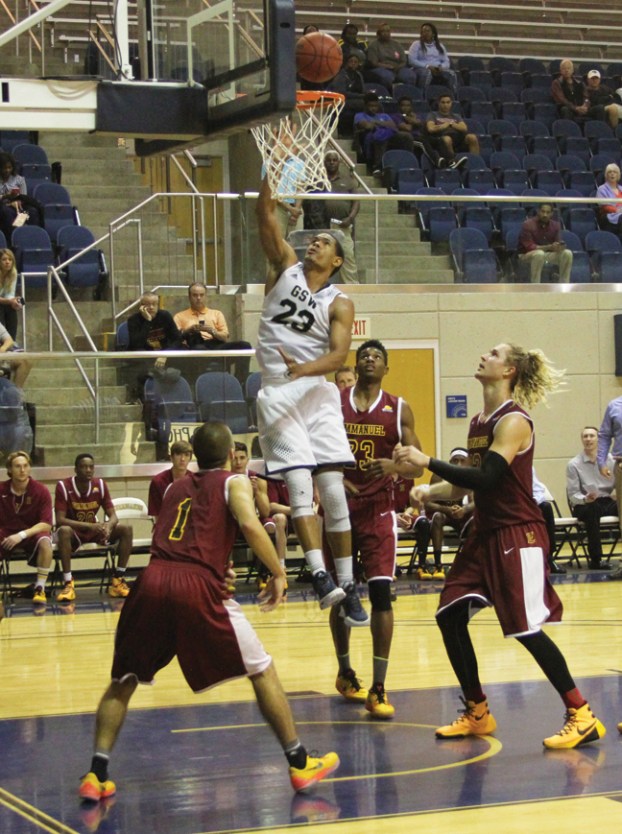 Michael Murray/Americus Times-Recorder: Chandler Thomas tosses in a lay-up during the ‘Canes’ Dec. 14 game against Emmanuel College. Thomas and Damien Leonard led GSW in the match with 14 points apiece.

AMERICUS – The Georgia Southwestern State University (GSW) Hurricanes basketball team has seen some serious action this week. The ‘Canes kicked off the week with a non-conference match against Emmanuel College at the Storm Dome in Americus on Dec. 14 before hosting Augusta University on Dec. 17 in both teams’ Peach Belt Conference (PBC) openers.
The ‘Canes fell to Emmanuel 95-68 before grabbing a 68-64 PBC win over Augusta. The series leaves GSW with a 4-3 overall record and a 1-0 record in the PBC.
The Dec. 14 contest also marked Sumter County Schools Education Day at the Storm Dome. The arena was packed with visiting third and fourth-graders from Sumter County Elementary School, who had made signs to show their support as they cheered on the ‘Canes. A group of students performed a dance routing during half-time to entertain the packed house.
When the ‘Canes hit the court, a 16-4 run by Emmanuel to open the match put GSW in a double-digit hole early and set the tone for the 95-68 loss.
The visiting Lions shot 57.6 percent in the first half, including five of 10 from beyond the arc, and pulled down 11 more rebounds (20-9) than GSW to take a 52-28 lead into the half-time break.
The Hurricanes trailed by more than 20 points the rest of the way.
Chandler Thomas and Damien Leonard led GSW with 14 points apiece. Thomas made all five of his field goal attempts and pulled down a team-best five rebounds. Leonard made four of nine from beyond the arc to work towards his 14 points.
Elijah Robinson knocked down 8 of 12 shots and finished with a game-high 19 points to lead Emmanuel. Austin Greene drained all three of his attempts from beyond the arc and chipped in 17 points. Zach Lillie scored 13. Willy Akasson grabbed a game-high seven rebounds.
The tough loss left the Hurricanes down, but certainly not out.
It was a second half of runs on the evening of Dec. 17 as the ‘Canes faced Augusta University, but every time Augusta pulled close to GSW, the Hurricanes had an answer. GSW eventually held off the Jaguars, 68-64.
The match saw the ‘Canes snap a 10-game losing streak to Augusta during which the Jaguars have won by an average of 12 points per game.
On Thursday, the Hurricanes led wire-to-wire.
GSW jumped out to a 7-0 lead, but, as would be a trend throughout the evening, Augusta fought back. Tommy Williams’ lay-up with 13:01 left before the half pulled the Jaguars within a point, 12-11.
However, for every Augusta run, GSW had an answer. This time the Hurricanes went on a 15-2 run to open their largest lead of the game (14 points) with 7:21 remaining in the first half. GSW managed to keep the advantage near double digits for the rest of the opening session and led 37-26 at the break.
Following a pair of Thomas free throws for GSW at the 16:50 mark of the second half that stretched the Hurricanes lead to 41-29, the Jaguars went on a 12-3 streak to pull within three.
Leonard drained a three-pointer out of a GSW time-out on the ensuing possession to temporarily stop the bleeding for the Hurricanes.
GSW eventually pushed its lead back to eight points when Jure Gunjina sank another three-pointer with 6:49 to play to put the Hurricanes ahead, 54-46.
Two quick steals by Augusta and scores on the other end pulled the Jaguars within a point, 54-53, with 6:19 remaining.
Again, the Hurricanes had an answer. GSW rattled off eight unanswered points, capped by a pair of Leonard threes, to lead by nine with 3:59 to go.
Augusta had one last run left, but the Jaguars would only pull within a basket. A pair of Keshun Sherrill free throws had Augusta at 62-60 with 1:34 left. Sherrill returned to the line a minute later and had the Jaguars within two again, 64-62, but Adam Thoseby made three of his final four from the charity stripe to help seal the win for GSW.
The Hurricanes finished with a slight edge in rebounding, 40-38, and dished out six more assists (14-8).
Gunjina connected on six of seven shots, including all four of his attempts from beyond the arc, and finished with 18 points. He added five rebounds and five assists. Leonard made five of 11 shots from three-point range and all four of his free throws in 29 minutes of action to finish with a team-best 21 points. Thomas chipped in 12 points and three steals.
Sherrill led all scorers with 23 points, 19 of which came in the second half. Tamyrik Fields added 12 points and a game-high seven rebounds. Keith Crump scored 10. Williams matched Fields with seven boards.
The Hurricanes return to the hardwood on Dec. 19 when they host Lander at 3:30 p.m. 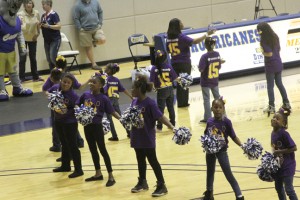 From STAFF REPORTS After suffering their first defeat of the season (85-72) to Emmanuel College in Franklin Springs on Dec.... read more