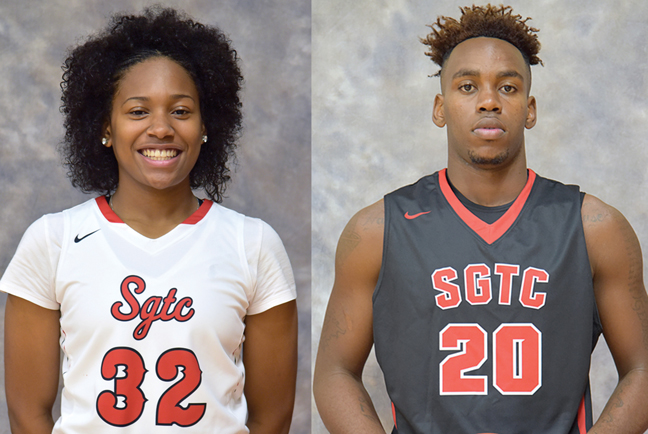 Submitted by South Georgia Technical College: SGTC’s Cierra Bond (32), at left, and DeMario Beck (20), at right, were recently selected ‘Players of the Week’ in the GCAA.

AMERICUS – Sophomore guard, Cierra Bond from Inkster, Michigan, has been selected as the Division I Player of the Week for the Georgia Collegiate Athletic Association (GCAA) for her recent performance in the South Georgia Technical College (SGTC) Lady Jets’ wins over Georgia Highlands State College and Andrew College.
Demario Beck, a sophomore forward from Cochran, had been selected to represent the SGTC Jets as the Division I GCAA Player of the Week prior to Thanksgiving for his efforts in the Jets’ three games that week.
Bond, who helped lead the Lady Jets to National Junior College Athletic Association (NJCAA) Division I women’s national tournament last season, averaged 17.5 points and 6.5 rebounds in the Lady Jets’ back to back conference wins. She was 11–16 from the three point line in those two performances.
Her efforts that week helped move the Lady Jets to 4–1 in the conference and 9–3 overall. The Lady Jets are currently ranked first in the conference ahead of Darton, in second place and Georgia Highlands, in third place. Central Georgia has dealt the only loss in the conference to the Lady Jets this season.
Beck was selected as the Player of the Week for the men in Division I for the week of November 24th. He averaged 12.3 points, 16 rebounds and 3.6 blocks in the Jets’ games against Eastern Florida and Combine Academy.
With their 2-2 GCAA record, the Jets are currently situated in fourth place in the conference, behind Georgia Highlands, Chattahoochee Tech, and Atlanta Metro.
One other SGTC player has been named as the Player of the Week this season. Sophomore, Angela Thompkins, was the first Division I women’s Player of the Week. She scored 30 points and 14 rebounds in that first week of the 2015-2016 season. She is from Punta Gorda, FL.