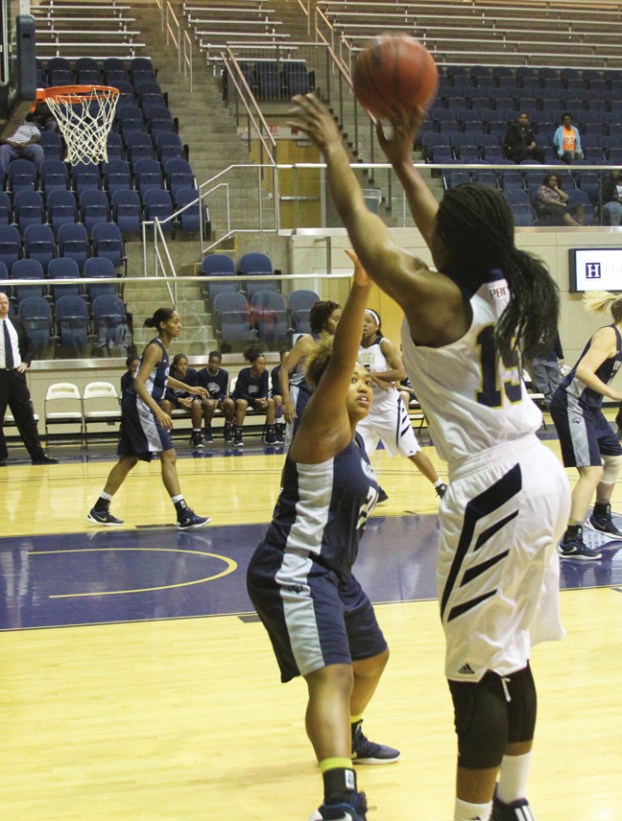 Michael Murray/Americus Times-Recorder: Yvonna Dunkley (15) drops in a shot from beyond the arch during the Lady ‘Canes’ Dec. 17 contest against Augusta.

After suffering their first defeat of the season (85-72) to Emmanuel College in Franklin Springs on Dec. 12, the Georgia Southwestern (GSW) Lady Hurricanes returned to the court with a vengeance as they fought their way to a 59-57 comeback win on Dec. 14 over Fort Valley State (FVS). The GSW ladies capped off the week’s action at the Storm Dome in Americus as they took their second loss of the season (81-71) to Augusta University on Dec. 17 in the team’s Peach Belt Conference (PBC) opener.
With the win and the two losses, the Lady ‘Canes drop to 6-2 overall.
The Dec. 12 contest saw Emmanuel take control of the game early, leading 10-0 until Ja’Quasha Sesler put in a three-pointer to break the Lady ‘Canes’ silence.
Emmanuel soon went on another scoring bender, steadily increasing the margin as they cruised to a 24-13 lead at the end of the initial frame.
The Lady ‘Canes found their groove at the onset of the second stanza, and continued to keep the scoring tight throughout the remainder of the contest, but their first quarter fall sentenced them to the 85-72 loss.
GSW scored 13 points in the first, 18 in the second, 22 in the third and 19 in the fourth.
Ja’Quasha Sesler led the Lady ‘Canes with 17 points and four rebounds, Jasmine McSwain had 14 points. Va’Quashia Hall and Yvonna Dunkley both had 10 points while Khayla Owens recorded seven rebounds.
The team made up for lost ground when they traveled to Fort Valley State to take on the Lady Wildcats on Dec. 14, staging a fourth-quarter comeback that saw the team fight their way back from a 10-point deficit to grab the win in the last second with a Dunkley basket.
Fort Valley came out early and climbed to an 8-16 lead with 3:16 left in the first.
Aleah Holden made two free throws followed by a free throw and lay-up from McSwain to cut their lead by three going into the second quarter.
GSW struggled in the second stanza, only scoring seven points, compared to Fort Valley’s 16 to head into half-time down 32-12.
The Lady ‘Canes fell behind by 20 with 7:21 remaining in the third. With two minutes of no scoring, Chanice Whitton made a lay-up that started a scoring streak for GSW.
Kenyona Armstrong and Dunkley both made three-pointers followed by two free throws from Whitney Young and two more from Sesler to cut Fort Valley’s lead to 10.
GSW out-scored The Wildcats in the third quarter 16-14.
Lay-ups by Dunkley and Whitten coupled with a free throw by Sesler cut Fort Valley’s lead to four at the 7:03 mark.
With four minutes left, GSW was down by seven. Holden made a free throw, followed by two three-pointers from McSwain to tie the game 55-55 with 2:20 remaining.
Fort Valley took a two point lead with a pair of free throws, but Sesler tied it up with a lay-up at the 1:35 mark.
After a foul on GSW and two missed free throws from Fort Valley, the pressure was high. With 15 seconds left, both teams used their final time-out. Fort Valley had a turn over with three seconds remaining. Dunkley took possession and put in the winning basket with one second left.
Fort Valley out-rebounded GSW 49-47 and had more bench points 28-21, but The Lady ‘Canes were able to come from a 20 point disadvantage to win by two.
McSwain led GSW with 17 points and Hall captured six rebounds. Dunkley put up 10 points and had four rebounds.
The Lady ‘Canes returned to their home court on Dec. 17 to open PBC play against Augusta University.
The Lady Jaguars came out strong in the initial frame, grabbing a 21-14 lead over the home team. GSW narrowed the gap to six points before the half, taking a 34-28 deficit into the locker room at the break. The Lady ‘Canes steadily clawed their way back in the second half, but a fourth-quarter surge by the Lady Jaguars ensured that GSW would not manage to overcome the deficit before the final buzzer.
Dunkley led GSW with 22 points and seven rebounds. McSwain tossed in 19 points while Emili Russ and Holden each brought down five rebounds.
The Lady ‘Canes are back in action in Americus on Dec. 19, hosting Lander University at 1:30 p.m.

From STAFF REPORTS AMERICUS – Sophomore guard, Cierra Bond from Inkster, Michigan, has been selected as the Division I Player... read more