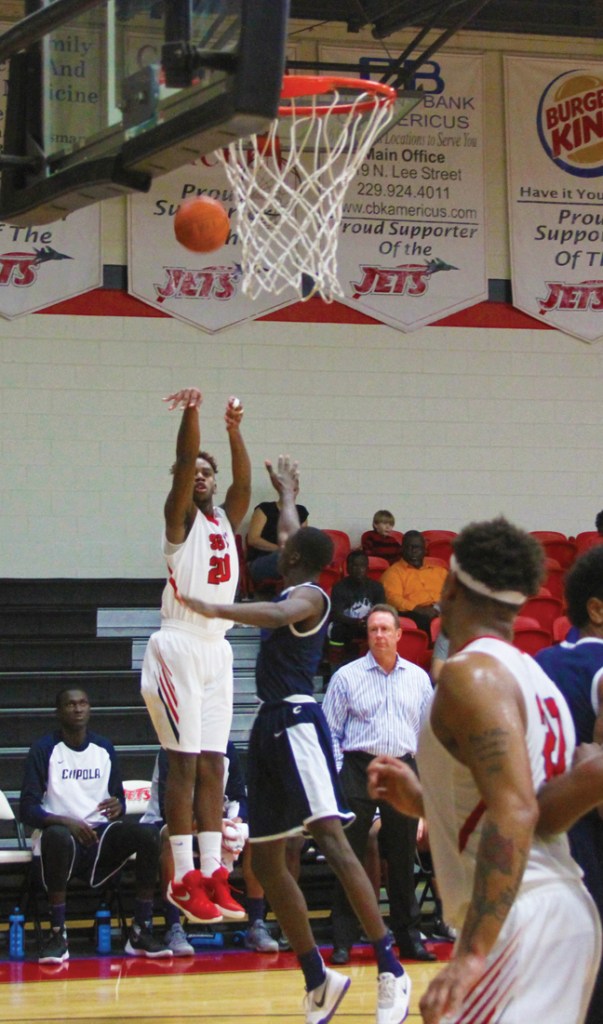 Michael Murray/Americus Times-Recorder: SGTC’s Demario Beck (20) drains a three-pointer during the first half of the Jets’ Dec. 17 contest against Chipola in Americus. 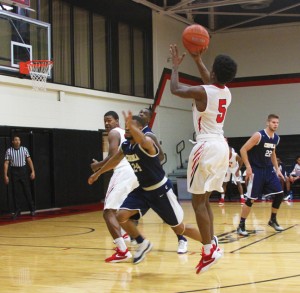 Michael Murray/Americus Times-Recorder:
SGTC’s Torico Simmons (5) takes a jumper for three points during the first half of the Jets’ Dec. 17 contest against Chipola in Americus. 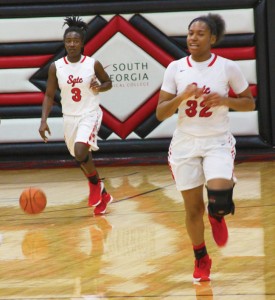 Michael Murray/Americus Times-Recorder:
SGTC’s Brittney Delva (3) and Cierra Bond (32) move the ball down the court in a recent home contest. against Georgia Highlands. Bond led the Lady Jets in their victory over Snead State on Dec. 16. Delva dished out nine assists in the Lady Jets’ win over Indian River on Dec. 17.

The South Georgia Technical College (SGTC) Jets and Lady Jets have had a productive holiday season, with both teams pulling in exciting wins in the past week.
The Jets fought their way to a narrow 68-67 victory over Chipola College on Dec. 17 in Americus. That same evening, the Lady Jets traveled to Mariana, FL. to take on Snead State’s ladies in the Chipola Classic. The Lady Jets snagged a 65-62 win over Snead in the neutral match. The next afternoon, the Lady Jets cruised to another 55-46 win over Indian River to wrap up the tourney.
This pair of wins marks a five-game streak for the Lady Jets, whose impressive 13-3 record leaves them ranked in first place in the Georgia Collegiate Athletic Association (GCAA). The Jets’ win was their second straight. Wth their record of 12-5, the SGTC men are currently ranked fourth in the GCAA.
The men’s match saw the Jets take the lead early, sending the visiting Chipola Indians into a six-point hole before the half. The Jets pulled ahead 35-29 in the initial frame. The Indians mounted a comeback effort in the second half, outscoring the Jets 38-33, but couldn’t overcome the home team’s early lead, sentencing them to a 68-67 loss.
The Jets had two team members hit double doubles in the contest, while two others scored in the double digits as well.
Demario Beck set the pace for the team as he hit a trio of bombs from three-point territory on his way to a game-high 21 points. Beck also contributed 12 rebounds to the win. Corbyn Jackson and Torico Simmons each added another 12 points, while Amir Warnock came off the bench to put another 10 on the board and grab 10 rebounds. Simmons led the team in assists with 10. Jackson did his part on the defensive side of the ball, contributing three blocked shots.
Altogether, the Jets won the battle of the boards, pulling in 40 rebounds to the Indians’ 34. With 17 total assists, Chipola dished out two more than the Jets in the contest.
In women’s action, the Lady Jets got off to a slow start in the Marianna, FL. tournament on Dec. 17. The scores remained tight through the first frame, with the Lady Jets falling into a two-point hole (19-17) against the Snead State Lady Parsons in the initial period.
The SGTC Ladies continued to have shooting troubles in the second frame. These struggles allowed the Lady Parsons to take a 36-27 lead into the half-time break.
The Lady Jets returned from the break fired up, however, and outscored Snead 19-12 in the third stanza to tie pull within two, at 48-46. SGTC’s hot streak continued into the fourth period and the Lady Jets added 21 more points to their total while holding Snead to only 16 to take the 67-64 comeback win.
Three members of the Lady Jets hit double figures in the win, with Cierra Bond leading the way. Bond nailed four of six shots from three-point land as she made her way to a game-high 16 points. Bond also contributed three assists.
Angela Tompkins and La’Deija James each tossed in 13 points, with Tompkins adding 11 rebounds for a double double.
The Lady Jets shot 49 percent from the field and 50 percent from beyond the arc. As a team, the SGTC ladies sunk 70 percent of their attempts from the charity stripe.
The Lady Jets returned to the hardwood the next afternoon to square off against the Indian River State College Lady Pioneers in round two of the Chipola Classic. SGTC made another strong showing in this contest, bringing home a 55-46 victory.
The Lady Jets pulled ahead right from the start, posting 18 points to the Lady Pioneers’ 11 in the first period. Indian River tacked on another 18 points before the half while holding SGTC to only 14. The Lady Jets were up 32-29 going into half-time.
Upon returning to the court, the SGTC ladies put a halt to the Lady Pioneers’ attempts to close the gap, giving up only five points in the third frame, while adding 16 to their lead. A late run by Indian River was not enough to overcome the gap and the Lady Jets emerged victorious at the final buzzer.
Three SGTC team members hit double figures in the win. Tompkins led the team this time around with 17 points and 12 rebounds. Molly Brown and Kendra Green each threw in 10 points. Brittney Delva dished out nine assists in the contest while Brown and Bond each gained a trio of steals.
The Jets return to action on Dec. 29-30, traveling to Panama City for the Gulf Coast Community College Classic. The Jets will open the tournament with a test against Northwest Florida before taking on Gulf Coast the following afternoon.
The Lady Jets will host a tournament of their own in Americus on Dec. 29-30. The SGTC squad will open the tourney with a battle against Broward College before returning to the court to take on Pensacola State the following day.