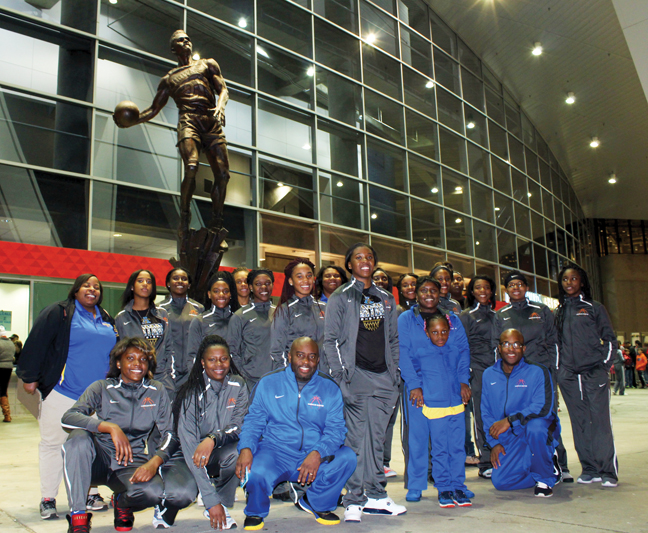 Photo by Cynthia Williford: The Lady Panthers and the team’s coaching staff pose for a photo with Phillips Arena’s recently-unveiled statue of Dominique Wilkins prior to the beginning of the Dec. 21 contest in Atlanta. 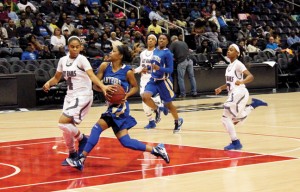 Photo by Cynthia Williford:
ASHS’ Amber Hicks makes a break for the bucket during the Lady Panthers’ Dec. 21 contest against Newton at Phillips Arena. Atyanna Gaulden, shown in the background, paced the Lady Panthers with 27 points in the match.

ATLANTA – Now 9-0 on the 2015 season, the Americus-Sumter High School (ASHS) Lady Panthers extended their winning streak on Dec. 21 when they traveled to Atlanta to take on the Newton Lady Rams at the Philips Arena. The Lady Panthers took a 76-52 victory in the neutral contest.
Atyanna Gaulden led the Lady Panthers in the contest with 27 points, 10 of which she put on the board during the first quarter. The ASHS senior and Florida State University commit for 2016 averaged 18.6 points per game coming into Monday’s non-conference match-up.
Before the action could commence, however, play the tip-off was delayed for 45 minutes because of an extended rehearsal by Atlanta-based rapper, Silento’, who performed at the Atlanta Hawks game later that night.
With less than 10 minutes to warm up, the Lady Panthers and Lady Rams jumped right into the game.
ASHS opened the first quarter with an abundance of energy, dominating the court with continuous fast-break opportunities and offensive rebounds. The Lady Panthers’ defense proved difficult to penetrate, forcing the Lady Rams to settle for perimeter jump shots. By the end of the first quarter, the Lady Panthers had amassed a 21-2 lead.
During the second and third quarter, the Lady Rams began to close the gap and managed to narrow the deficit to 34-18 by the half-time break.
With Gaulden on the bench due to foul troubles for much of the third period, the Lady Rams’ sparked a run that  saw the Newton girls come within single digits of the Lady Panthers. After spending the first half of the game hoisting long-range shots, the Lady Rams began driving to the rim in the second half. They also limited the Lady Panthers’ fast-break opportunities by implementing a full-court press.
Newton’s Alexia Chatman was the catalyst for the Lady Rams’ come-back run. Chatman finished the game with 16 points.
Gaulden rejoined her teammates on the court midway through the fourth quarter, immediately igniting the Lady Panthers’ offense into action. She broke through the Lady Rams’ defense by attacking the rim and setting up her teammates with close-quarters assists.
With her help, the Lady Panthers pushed their way back into a double-digit lead and came away with a comfortable 76-52 win.
Two other Lady Panthers hit double digit marks for the team during the match. Timia Swanson contributed 12 points to the ASHS win and Jakala Stevenson tossed in another 11. Jykiera Long connected on two shots from the three-point line on her way to tacking on another eight points for the Americus team.
Swanson dominated the glass for the Lady Panthers, bringing down a game-high 12 rebounds, followed closely by Gaulden,  who had 10. Gaulden also contributed seven assists and five steals to the victory.
Looking ahead, Lady Panther head coach, Sherri Harris, said that the team still has several challenges to overcome this season. When asked which teams she expects to cause problems for the ASHS girls, Harris simply responded, “All of them.”
“I think this has actually been very hard, coaching-wise,” Harris said. It’s harder when we’re undefeated because you don’t want your girls’ heads to get kind of swollen.”
For now, however, this win was just the Christmas gift Harris was looking for.
“That’s actually what I wanted,” she said. “I don’t ask for much, but I told the girls that if we give a good effort, I’d be okay with the game.”
With yet another victory under their belts, the Lady Panthers stuck around Philips Arena to cheer on the Hawks as they cruised to a 106-97 over the Portland Trail Blazers.
The Lady Panthers will return from their Christmas break on Dec. 28, heading to Naples, FL. to take on the Everglades Gators in the Sunshine Shoot-out Tournament. The ASHS girls will return to 1-AAAA play on Jan. 12, traveling on to Albany High School to defend their unmarred region record against the Lady Indians.