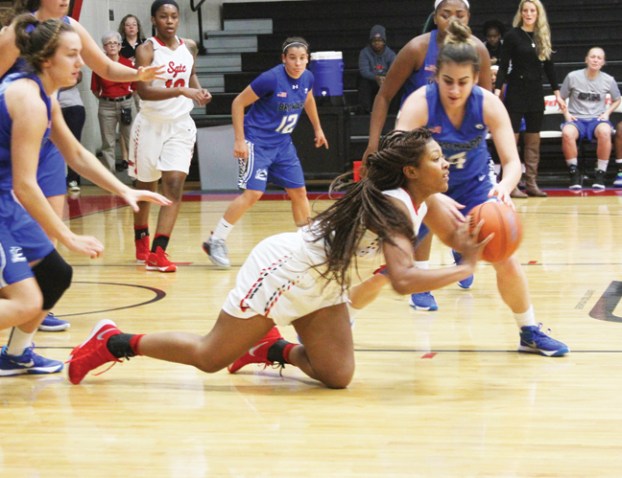 Michael Murray/Americus Times-Recorder: SGTC’ s Angela Tompkins scrambles to get a loose ball to her teammate duing the Lady Jets’ Dec. 29 contest against Broward College. Tompkins paced the Lady Jets in the match with 18 points.

Lady Jets come back to defeat Broward at SGTC Classic

AMERICUS – The South Georgia Technical College (SGTC) Lady Jets captured their sixth consecutive victory in a narrow 63–60 comeback win over Broward College on the opening night of the SGTC Christmas Classic basketball tournament at the Hangar in Americus on Dec. 29.
“We didn’t give up and that allowed us to win,” said SGTC Athletic Director and Lady Jets head coach, James Frey, after the team came from behind to capture the 63 -60 win over Broward. “Neither team played very well. We were just coming back from the Christmas break and it showed, but I was proud of our team and the way they kept scrapping.”
Broward plowed their way to an 8–0 lead in the beginning of the match-up before Angela Tompkins broke the Lady Jets’ silence with a lay-up at the 7:30 mark. Tompkins laid up another and then drained a three-pointer halfway through the initial period to put the Lady Jets back in the game.
With three minutes let in the first frame, Molly Brown added a lay-up to give the Lady Jets their first lead of the game. The Lady Jets remained ahead 16-14 at the end of the first period.
The teams traded scores over the next ten minutes and Broward managed to take a 24-23 advantage into the locker room at half-time.
Broward began to steadily pull ahead early in the second half, but the Lady Jets persevered, due in part to a pair of late three-pointers by Cierra Bond, which put the SGTC ladies back ahead 44-43 at the end of the third stanza.
Broward rediscovered their groove early in the final period, sparking a 12-0 run that was finally brought to a halt by a a pair of Bond free throws, which ignited the Lady Jets into action. The teams continued the battle, with the home team clawing their way back to within three points (58-56) with one minute let on the clock.
From there, SGTC’s Kendra Green connected on a long shot from three-point territory to put the Lady Jets up for good.
Despite a last-ditch effort by Broward to stage a comeback, the Lady Jets matched the visitors point-for-point over the final minute to secure the victory.
There were a total of nine lead changes and two ties in the 40-minute contest.
Tompkins led the Lady Jets in scoring with 18 points, also coming away with eight rebounds. Bond and Le’Deja James were the only two other players in double-figures, each adding 10 points. James pulled down five rebounds while Bond grabbed three rebounds and dished out two assists.
Brown led the team on the boards with nine rebounds, while adding nine points. Green added seven points and four rebounds while Brittney Delva tossed in six points. Mikaela Jones was the only other Lady Jet to score with three points.
Nicole Jimenz was the leading scorer for Broward with a game-high 24 points.
The win left the Lady Jets with a 13-3 overall record on the season.
The Lady Jets went on to face Pensacola State in Americus the next afternoon before taking on Gadsden State Community College on Dec. 31.
The results of these contests were not available at press time.
The Lady Jets open 2016 play on the road, traveling to Tuscaloosa, AL. to take on Shelton State College.

Panthers close 2015 with win over Terrell

By MICHAEL MURRAY The Americus-Sumter High School Panthers capped off the team’s 2015’ basketball action with a substantial 73-45 win... read more