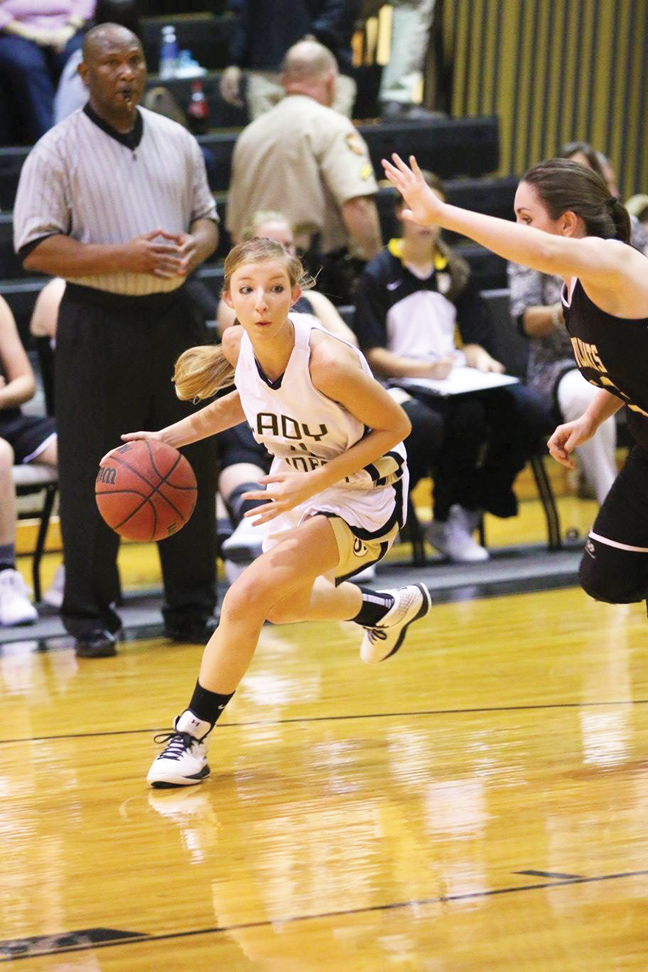 Photo by Sheri Bass: Cassi Bass moves the ball down the court in an early-season contest in Americus. Bass drained six three-pointers to lead the Lady Raiders to victory on Dec. 29 in Phenix City.

PHENIX CITY, AL. – The Southland Academy Lady Raiders wrapped up the year 2015 with a pair of solid wins in the Glenwood Border Wars tournament, sponsored by Glenwood High School in Phenix City, AL. on Dec. 28-29.
The Lady Raiders kicked off the action in the first round of the tournament, taking on the Edgewood Academy Lady Wildcats of Elmore, AL.
The Lady Raiders brought the heat to their first match of the tourney, grabbing a 44-30 win over the Lady Wildcats.
The next afternoon, Southland’s girls returned to the hardwood to battle the Success Unlimited Academy Lady Mustangs, of Montgomery, AL. The Americus ladies rode the momentum of the previous day’s victory to another significant defeat of the Lady Mustangs, taking down their Alabama opponents 42-21.
Southland sophomore, Kathleen Kinslow, paced the Lady Raiders in the first win of the tournament, scoring 18 points to help push the team to victory. Kinslow led the team on the boards, bringing down five rebounds in the match while also contributing five steals.
Sophomore, Cassi Bass, tacked on another eight points for the Lady Raiders’ victory and dished out five assists.
Sophomore, Sydney Hayes, tossed in five more points while freshman, Macy Williams, and sophomore, Savanna Banks, each put up four.
The next day, Soutland’s girls returned to the court to deal Success Unlimited a 42-21 defeat. The Lady Raiders were paced in this contest by Bass, who successfully honed in on the bucket from three-point territory a total of six times to lead the team with 18 points. Bass also did her part on the defensive end of the ball, contributing three steals to the victory.
Sophomore, Kendall Kirkland, followed Bass’ long-range scoring spree with six points, while Kinslow and Williams each tossed in five.
Banks dominated the glass for the Lady Raiders, bringing down eight rebounds, followed by Williams with five and Hayes with four.
Kinslow and sophomore, Karleigh Werling, contributed four and three steals, respectively.
Kinslow led the team in assists with three, followed closely by Sydney Payne, with a pair.
The Lady Raiders’ young team is scheduled to open GISA 3-IAAA play on Jan. 5, traveling to Camilla to battle the Westwood Wildcats. Southland’s ladies will return to their home court on Jan. 8, taking on another region foe, the Tiftarea Lady Panthers.