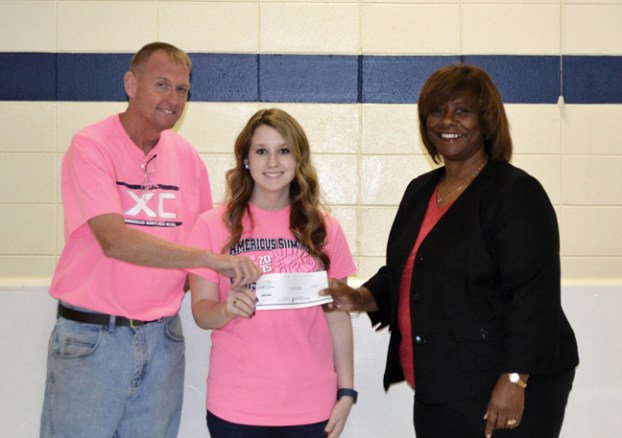 Submitted by John Daughety: Americus-Sumter cross country Head Coach, John Daughety (left) and one of the team’s members, Kelly Ingle (center), accept the donation of $1,744 from Spring Rosati (right) of Modern Woodmen of America at the Ninth Grade Academy in Americus.

AMERICUS – Americus-Sumter High School’s (ASHS) cross country program received a well-deserved boost on Dec. 23 in Americus.
At a check presentation ceremony held at the Americus-Sumter Ninth-Grade Academy (formerly Staley Middle School), a representative of Modern Woodmen of America presented ASHS head cross country coach, John Daughety, a check for $1,744.
Daughety, currently in his fifth year as the head of the ASHS cross country team spoke with the Times-Recorder prior to the ceremony. “Spring Rosati works with a company named Modern Woodmen which has a matching funds program,” he said. “We discussed, back in August, that they could match the funds that we raise for the cross country team.” The team raised $1,744.
Daughety and the team have been busy raising funds for the team ever since that meeting.
“This year, we held the Panther Prowl Invitational,” Daughety said. “We have a course out at the rec department. We also had T-Shirt sales and got some sponsors for the team… They are going to give us matching funds for the money that we’ve raised. This donation of over $1,700 will allow me, for the first time, to purchase [uniforms] for the team. They’ll remain with the program. For example, [a student] can sign one out at the beginning of the season and then return it at the end of the season. When we go [to an out-of-town meet], we’ll look the same when we go off to run… Up until now, the kids have all purchased their own uniforms. We have scrounged for money before, so this is a big deal.”
During the interview, Daughety discussed how much the ASHS cross country team has grown over the last few years, stating that the donated funds will benefit the team as it continues to grow. “This year, we had the first of our students, Simran Sethi, qualify for state since the Americus and Sumter High Schools merged. She qualified as an individual. She is one of only two in Class AAAA competition to do so…”
“We started, in our first year, with maybe six or seven girls on the team,” Daughety continued, describing how the team has gained in popularity. “This year, we’ve gotten to the point that we consistently have around 30 runners on the team. We also have some middle school runners for the first time. Previously, we have only had one middle school runner. This year, we have enough for an entire team.”
According to Modern Woodmen of America’s website, the organization is a member-owned financial services organization that specializes in improving quality of life for its members. “They offer a lot of scholarships and other opportunities for young people,” Daughety said.
Daughety went on to express his desire to open a Modern Woodmen of America chapter in Americus. “It would be the first one south of Macon,” he said. “Starting up a chapter here, we’d have to have a president, vice president, and a treasurer…” Daughety went on to say that the ASHS cross country team includes some outstanding individuals that would likely be valuable assets to the program in the future.