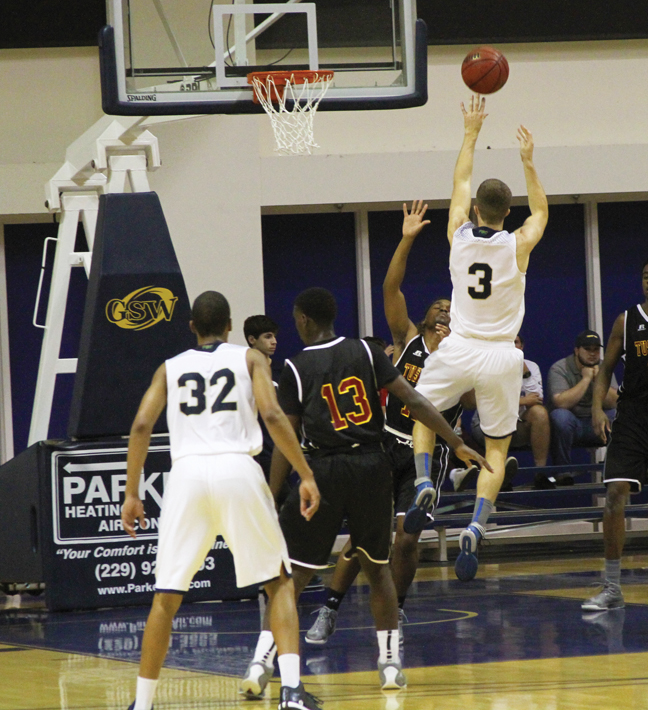 Michael Murray/Americus Times-Recorder: Adam Thoseby (3) tosses up a shot from the lane during a December contest in Americus. Thoseby led the ‘Canes to an upset over Columbus State on Jan. 7 with a career-high 34 points.

COLUMBUS – It was “bombs away” on Jan. 7 in the Lumpkin Center as Georgia Southwestern drained a school-record 17 three-pointers to pull off a 109-104 upset of No. 18 Columbus State in Peach Belt Conference (PBC) men’s basketball action.
Adam Thoseby scored a career-high 34 points to lead the Hurricanes, and three other GSW starters added 20 or more points to the winning effort. It was the first time GSW scored over 100 points in a PBC game since joining the league in 2006-07.
The Hurricanes improved their record to 6-6 overall and 2-3 in conference play while Columbus State fell to 10-2, 4-1 in the PBC. The Hurricanes have won three straight road games in the series with the Cougars.
The sides played a fairly even opening 10-and-a-half minutes until Columbus State made the first run of the game, a 14-0 outburst that put the Cougars ahead 39-26 with 5:39 remaining before half-time. GSW quickly clawed their way back and tied the game at 44-44 with a run capped off by a Terence Johnson tip in at the 1:04 mark. Thoseby scored nine straight points for GSW during that stretch.
Columbus State led 49-45 at the break.
Neither team could create much separation in the second half, and the largest margin was nine points when Columbus State led 73-64 with 11:15 to play. The Hurricanes would not go away, however, and eventually regained the lead with 1:46 to go when Damien Leonard sank a three-pointer to bring the score to 96-93.
Cam Baker answered with a three-pointer for Columbus State and, following a Brandon Price basket for GSW, Jacori Payne tied the game once again for the Cougars.
The final momentum swing went back to GSW when Price converted a three-point play with 33 seconds left on the clock. His free throw on that conversion was the first of nine straight made by the Hurricanes to cinch the victory.
GSW’s shooters were more accurate as they have been all season. The Hurricanes shot a season-best 63.9 percent (39 of 61) from the floor, including a remarkable 58.6 percent (17 of 29) from beyond the arc, and a season-best 87.5 percent (14 of 16) from the charity stripe.
Columbus State wasn’t far behind with a 59.1 field goal percentage and 75 percent efficiency from the free throw line.
With all of the made baskets, both teams fell well below their season average for rebounds. The Hurricanes finished with a slight edge in the category, 29-25, and improved to 6-0 this season in the battle of the glass. GSW dished out 10 more assists, 24-14, and drained nine more from beyond the arc, 17-8, than the Cougars. The 24 assists are the most in a game for GSW since Feb. 7, 2013, which, interestingly enough, came against Columbus State.
Price connected on eight of nine shots, finished with 22 points, and dished out a game-high seven assists for GSW. Leonard sank six of nine shots from three-point range on his way to 20 points. Jure Gunjina chipped in 20 points, eight rebounds and six assists.
Baker led all scorers with 41 points, 22 of which came in the second half when he made eight of 12 shots and all five of his free throw attempts for CSU. Payne added 23 points and five rebounds. DeMarcus McVay snagged a game-high 11 rebounds.
This upset comes on the heels of a three-game losing streak for the ‘Canes in the PBC. Since returning to the court in 2016, the Hurricanes dropped a 74-64 decision to the University of Montevallo on Jan. 2, followed by a 70-56 loss to Georgia College on Jan. 4.
Gunjina posted his first double-double of the season, leading the Hurricanes with 16 points and 10 rebounds in the Jan. 2 contest.
Gunjina again led the Hurricanes with 15 points and five rebounds in the Jan. 4 match. Thoseby chipped in 12 points.
The Hurricanes return home to host Young Harris on Jan. 9 at 3:30 p.m. 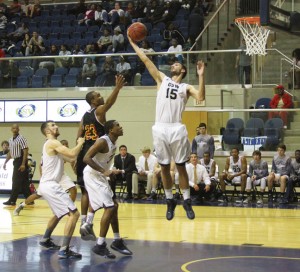 Michael Murray/Americus Times-Recorder:
Jure Gunjina (15) throws up a hook shot from the lane during a December contest in Americus. Gunjina posted a dopuble double during the ‘Canes’ Jan. 2 match against Montevallo and led the team with 15 points in the Jan. 4 test.