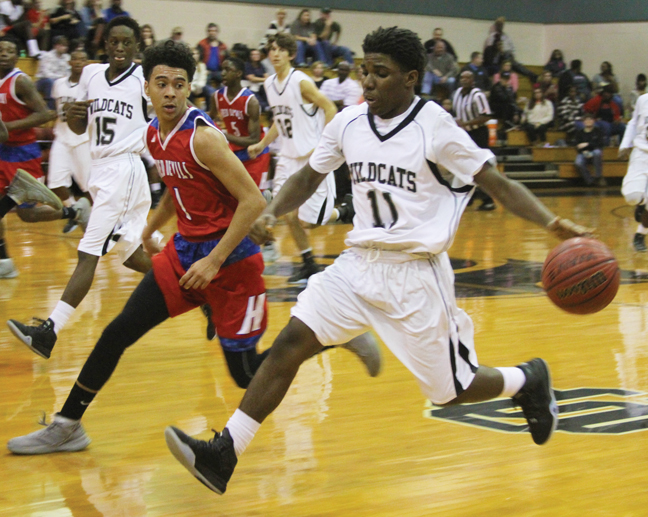 Michael Murray/Americus Times-Recorder: DJ Tatum dribbles past a Hawkinsville defender during the Wildcats’ Jan. 5 contest against the Red Devils. Tatum contributed seven points to the Wildcats’ cause in the contest.

ELLAVILLE – The Schley County Wildcats and Lady Wildcats’ basketball teams returned to the court from the Christmas break on Jan. 5 in Ellaville, taking on region 4-A foes, Hawkinsville.
Despite determined performances from each Ellaville team, the Wildcats and Lady Wildcats both suffered defeats at the hands of the Red Devils and Lady Red Devils.
Schley’s girls kicked off the action first in the 2016 opener and Hawkinsville came out strong in the contest.
The old saying goes, “The best defense is a good offense,” and the Lady Red Devils definitely adhered to this adage during the Jan. 5 match. Hawkinsville’s girls made a hard offensive push in the beginning of the contest, holding the Lady Wildcats to only two points for the majority of the first frame. With 30 seconds left in the initial period, Schley sophomore, Chelsey Carter, broke the home team’s silence with a fast-break lay-up, followed by a free throw to put her team within four points.
Hawkinsville took a 9-5 advantage into the second stanza and continued to expand the margin throughout the second period. Despite Carter and Bethany Phillips dishing out some expert assists to Emily Campbell and Raven Butler, as MaReisha Brooks and Campbell returned rebounds to the bucket, the Lady Wildcats ran into turnover troubles through the end of the contest and took the 45-18 loss.
Following the defeat, the Wildcats hit the court to try to avenge the early loss. The Red Devils entered the fray with five seniors lending their experience to the team.
The relatively young Wildcats opened the contest with one freshman (Noah Hammons), two sophomores (Calvin Sims and Christian Arnett), and a pair of juniors (Tyree Hawkins and Jamarcus Scott) on the floor. The young Wildcats eventually found themselves overwhelmed by the experienced visiting team and suffered a 69-43 defeat despite a robust performance.
The Red Devils struck first in the match, tossing in a lay-up one minute into the action. Arnett quickly evened the score, laying up a rebound for the ‘Cats. Hawkinsville proceeded to take off on a seven-point run before Arnett saw another opportunity to toss in another two-pointer. As the Red Devils steadily advanced their lead, the Wildcats answered three more times in the initial period, with Arnett and Scott breaking through for a lay-ups and Devonta Alridge sinking a pair of buckets from the charity stripe.
The Wildcats found themselves down 19-10 as the team headed into the second stanza.
Sims opened the second frame with a spot-on three-pointer from the left side to bring the Wildcats within six, but this would be the closest the scores would come for the remainder of the contest. The Red Devils steadily inched forward over the next 20 minutes of play, overcoming the Wildcats’ offensive endeavors.
The remainder of the match was highlighted, from the Wildcats’ perspective, by an adept assist dished out by Deric Tatum to Scott, an exciting block on the part of Chance Holloman in the third quarter, and a buzzer-beating three-pointer by Hammons that closed out the match.
The Wildcats saw two team members shoot double figures in the contest. Scott paced the team, contributing 12 points in the match-up, while Arnett followed close behind with 10 points. Tatum added another seven points, while Hammons tossed in six for the Wildcats.
Both the Wildcats and Lady Wildcats traveled to Montezuma to take on Macon County on Jan. 8. the results of these matches were not available at press time.
The teams will return to action on Jan. 9, battling Quitman County in Ellaville. 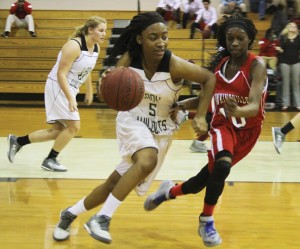 Michael Murray/Americus Times-Recorder:
Chelsey Carter moves the ball down the court during the Lady Wildcats’ Jan. 5 contest against the Lady Red Devils.